Windscreen egged? Ignore Facebook advice and use your wipers

One reads: “If you are driving at night and eggs are thrown at your windscreen, do not stop to check the car, do not operate the wiper and do not spray any water, because eggs mixed with water becomes milky and block your vision up to 92.5%, and you are then forced to stop beside the road and become a victim of these criminals. This is a new technique used by gangs, so please inform your friends and relatives.”

The warning has been circulating online for at least 10 years.

Other versions claim the South African police have said its “a new technique used by criminal gangs”. The warning has also surfaced as a graphic claiming to be an “official message” from the “Nigeria police”.

But is it true? We checked. 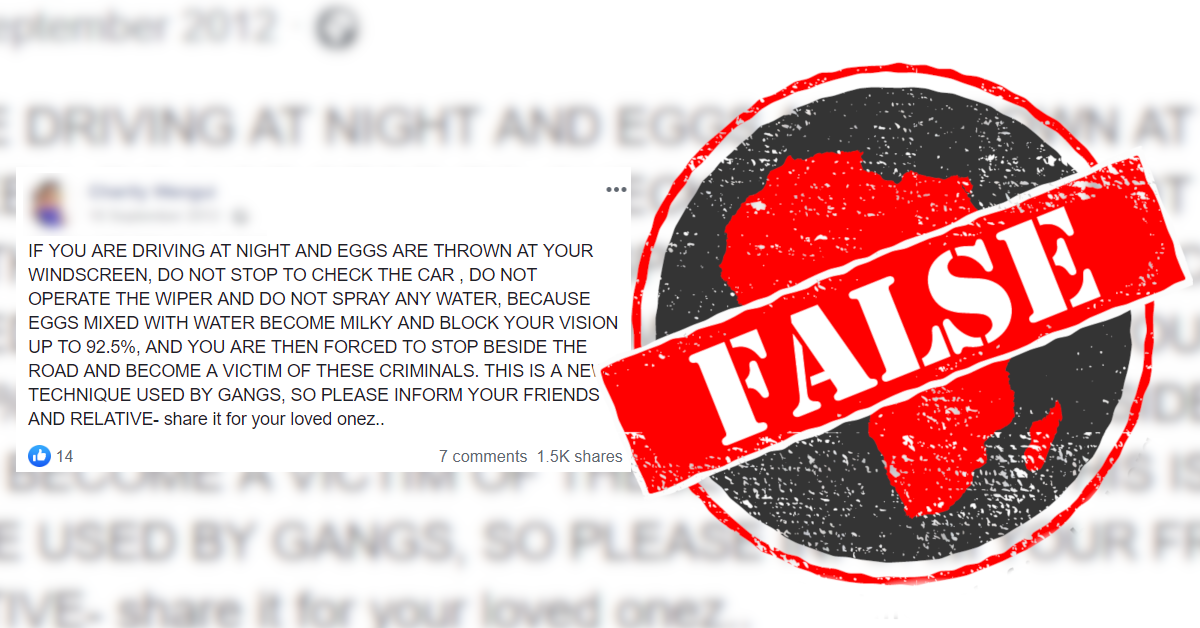 In July 2015, the Canadian Broadcasting Corporation reported that a woman in the town of Regina had eggs thrown at her windshield.

Regina police advised drivers not to use their windshield wipers “as the egg will smear and further hinder your vision”.

The report also said the story “closely matches one that crops up on social media from time to time, but which is routinely reported to be a hoax”.

In April 2019, WCNC, a US television channel based in North Carolina, reported on a number of windscreen eggings. These were apparently all practical jokes by teenagers, not criminal actions.

The YouTuber performed the experiment in the day and at night. He threw eggs at his car, then operated his wipers and sprayed water – exactly what the Facebook post warns people against.

The wipers cleared the eggs and he was able to see through his windscreen.

After the experiment he said: “One egg, many eggs, day or night really makes no difference. Honestly, it’s just one of those things passed around on the internet to instil fear… We can successfully say this is not a problem, it is not an issue.”

In December 2017, Sergeant Harry Tangye of the Devon and Cornwall Police in the UK also posted a YouTube video to dispel the rumour. He showed that using your windscreen wipers if your car was egged improved your vision, and it was better to add water than not.

In December 2009, fact-checking site Snopes investigated the claim. Snopes found that police officers whose windscreens were egged had no difficulty in chasing after the bad guys, and concluded that the rumours were “mostly false”. – Grace Gichuhi