Yes, cartoon character Popeye based on real man – but not man pictured

The post includes a collage of three images: a sketch of the cartoon character, a photo of a man who looks a lot like Popeye, and a photo of a gravestone inscribed with the name “Frank ‘Rocky’ Fiegel” and the epitaph “Inspiration for Popeye the Sailor Man”.

The caption gives a brief biography of the pipe-smoking sailor Fiegel, claiming that the cartoonist Elzie Crisler Segar met him as a young man and based the character Popeye on him. But is this accurate and is the photo in the post of Fiegel? 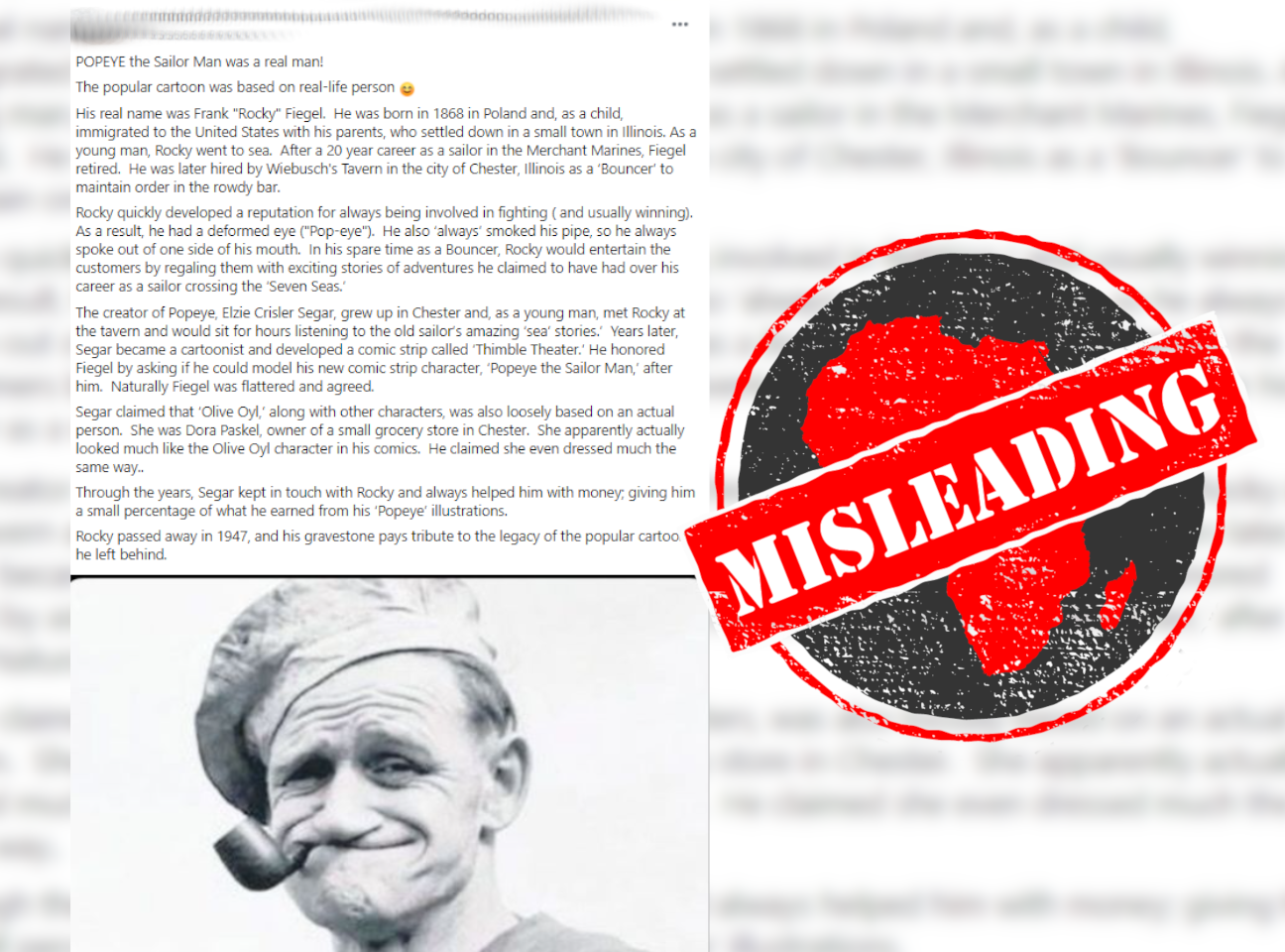 Locals confirmed Popeye based on man from Chester, Illinois

The official website Popeye says that the original cartoon character of Popeye was introduced on 17 January 1929 in a comic strip drawn by Segar and published in the newspaper the New York Journal.

Segar was born in Chester in the US state of Illinois, where the Facebook post claims Fiegel lived.

While Popeye wasn’t initially the comic strip’s main character, he became famous for repeatedly saving the life of his eventual love-interest Olive Oyl and for eating spinach, credited as the reason for his strength.

According to a 1979 newspaper clipping from the Southern Illinoisan, it was “commonly accepted that Fiegel provided Segar with the basis for the character of Popeye”.

The newspaper said that although Fiegel wasn’t actually a sailor – unlike what is claimed in the Facebook post – he had “the reputation of being as tough and as fearless as the cartoon character”.

According to the newspaper, Fiegel only learned he was the inspiration for Popeye in 1938. He died in 1947, though his gravestone was only erected in 1996, according to the Official Popeye Fanclub.

A New York Times article from 2004, the 75th anniversary of Popeye’s debut, said that according to Chester locals it was obvious that Popeye was inspired by Fiegel because of his “jutting chin, wiry frame and pipe”.

Next we checked whether the photo in the Facebook post showed Fiegel.  A reverse image search led us to the UK’s Imperial War Museum.

The photo appears in a collection showing men on board the battleship HMS Rodney in 1940. It is captioned: “A Leading Stoker nicknamed ‘Popeye’, with 21 years service.”

There is no evidence Fiegel served in the British navy. And in 1940 he would have been 72 years old, much older than the man in the photo.

The man pictured must have received his nickname because of his resemblance to the cartoon character Popeye, not the other way around.