A graphic in a screenshot posted on Facebook says: “Water and bleach in a coke bottle reflect and refracts light, creating a 55-watt light bulb.” It shows three photos of glowing plastic bottles.

In the screenshot, the graphic is captioned: “A project called Liter of Light has a solution. Its creators discovered that plastic bottles filled with a mixture of water and bleach ‘refract the light from outdoors into the house, lighting up much like a light bulb.’ When placed on the roof of a house the bottle becomes an adequate and inexpensive source of light.”

Rolling blackouts and electricity price hikes are becoming the norm globally, and in South Africa electricity load shedding, when demand exceeds the available supply, is common.

But is a simple mixture of water and bleach a real alternative to electric lights? The graphic was flagged as potentially false by Facebook’s fact-checking programme, so we checked. 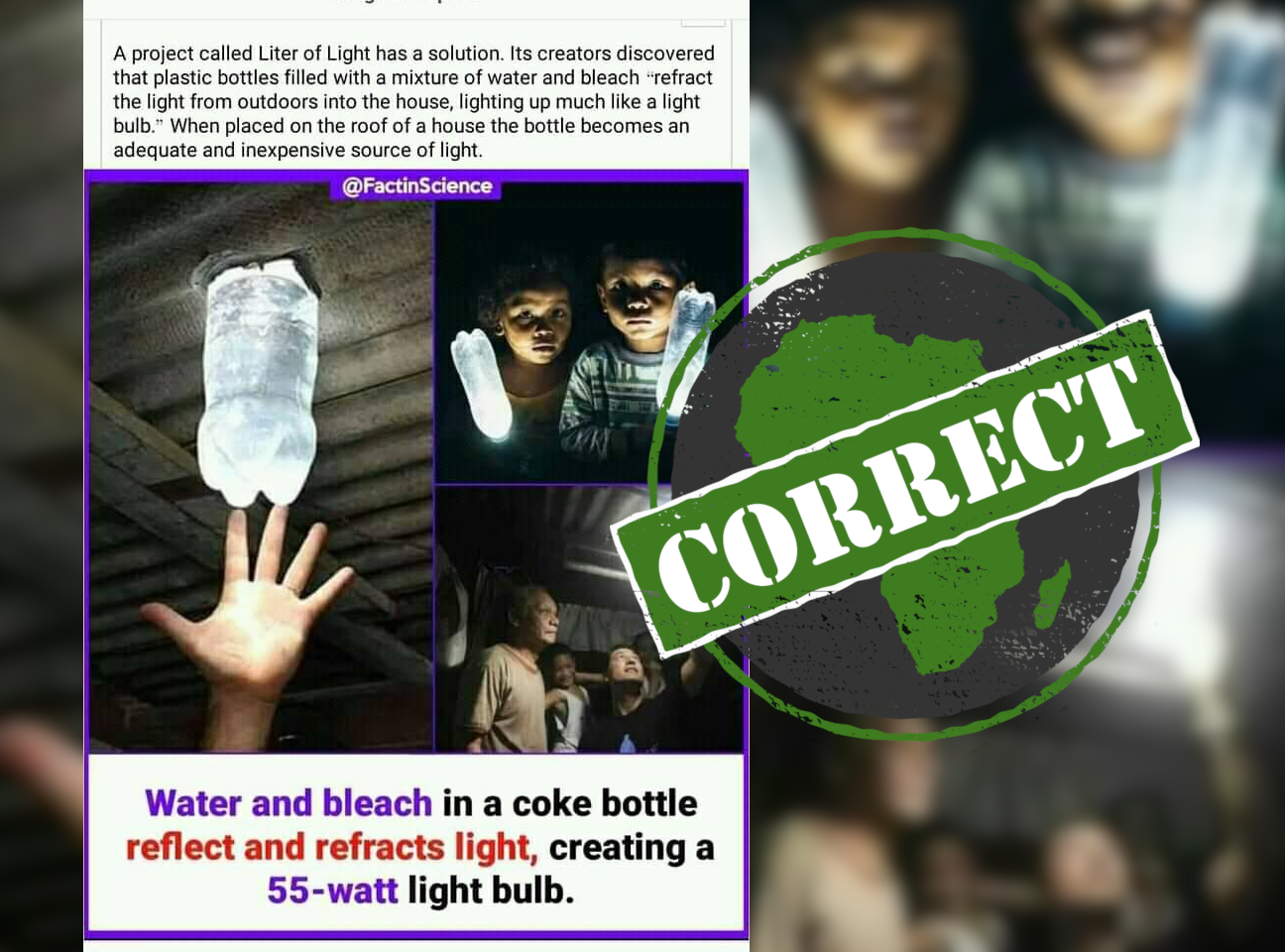 Liter of Light installed bottle bulbs in more than 15 countries

We looked up Liter of Light and found it was started as a project by the MyShelter Foundation in the Philippines in Southeast Asia. Its aim is to provide “affordable, sustainable solar light to people with limited or no access to electricity”.

Liter of Light claims to have “installed more than 350,000 bottle lights in more than 15 countries”.

In 2014 Liter of Light was given an award by World Habitat, an international not-for-profit organisation advocating for fair housing. According to a publication released by World Habitat, recycled plastic bottles are filled with water and a little bleach – to stop algae growth – and fitted into a hole in the roof of a building.

World Habitat says: “One solar bottle bulb helps prevent carbon emissions of up to 200 kilos and can keep working for as long as five years.”

To be used at night, the bottle must be upgraded with an LED bulb, micro-solar panels and a battery.

Environmentally friendly and easy to make

According to the United Nations, the bottle bulb concept is easy to understand and build from locally available materials. It is also environmentally friendly:  “The plastic bottles used are upcycled and avoids the larger energy use of gathering, shredding, manufacturing and shipping of new bottles.”

A 2016 study concluded that this bottle was a better option than putting glass plates in the roofs of homes “for providing sufficient illumination during daytime in congested settlements”. It gave enough light to read by “in a larger area of the room for a longer part of the day” and light reached further into the corners of a room.

The graphic shared on Facebook is accurate – a plastic bottle of water and bleach installed into the roof can give the same amount of light as an electric lightbulb and is cost-effective and environmentally friendly.

Are there ‘100 million generators in private hands’ in Nigeria?