Yes, manchineel tree is the world’s ‘most dangerous’

A graphic posted on Facebook on 23 August 2022 and viewed nearly 26,000 times in just 17 hours claims to identify the most dangerous tree on Earth.

“The manchineel is the world’s most dangerous tree,” it reads. “The sap from its trunk gives you blisters, ingesting its apples can kill you, and if you try burn it down, the smoke can blind you.”

The graphic includes two photos. One shows a sign pinned to a tree trunk that reads “manchineel tree DO NOT TOUCH”. The other is of fruit scattered on the ground, seemingly from the manchineel.

Meta’s fact-checking system has flagged the graphic as possibly false. But it’s true. 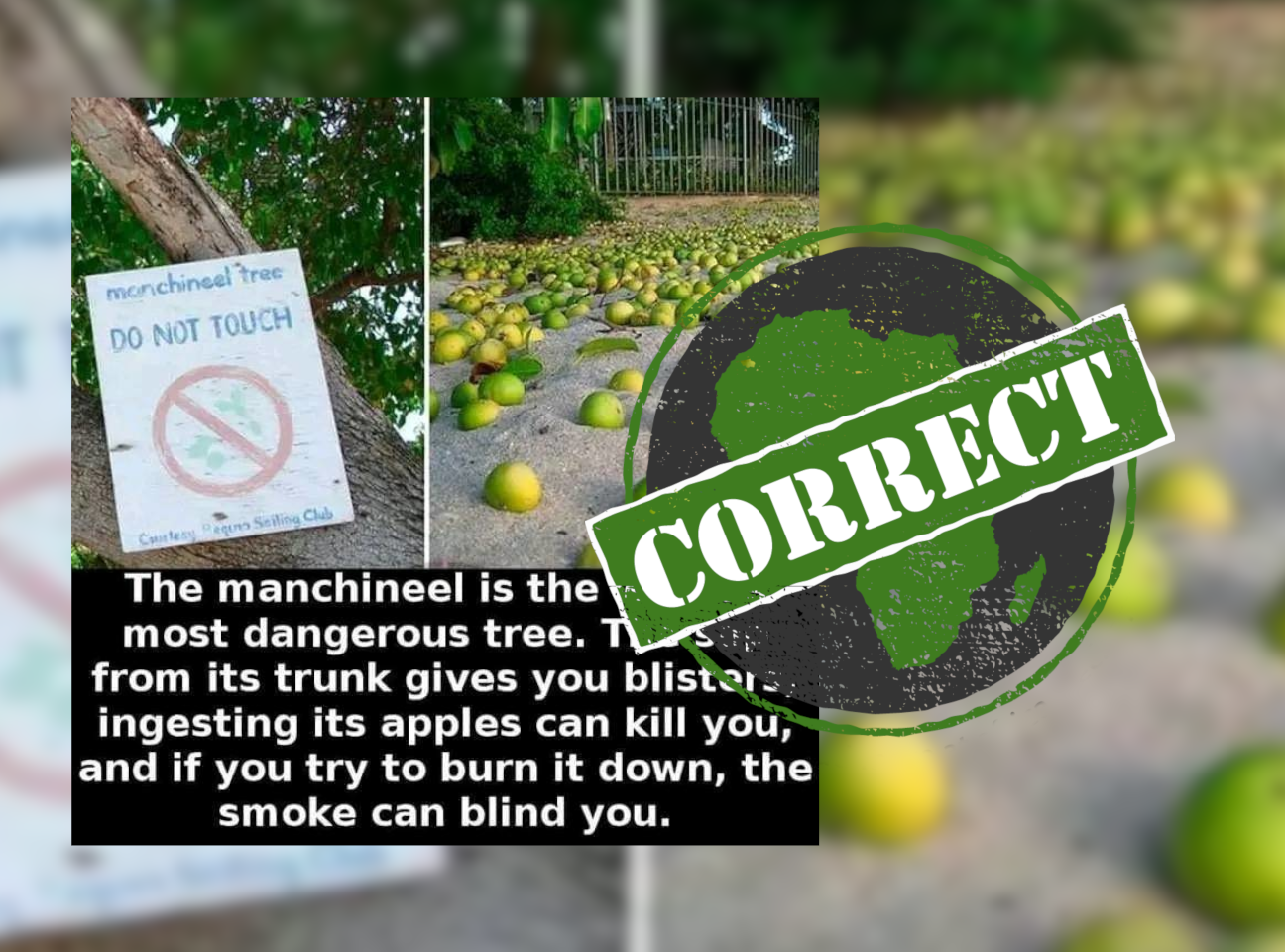 Found along beaches of Caribbean and Gulf of Mexico

The manchineel tree, Hippomane mancinella, is known for its poisonous fruit, according to Britannica.

The tree is mainly found near central America, on the beaches of the Caribbean and the Gulf of Mexico.

“The manchineel is so poisonous that smoke from its burning wood irritates the eyes, and latex from its leaves and bark causes skin inflammation,” Britannica says.

A 1993 article in the British Journal of Ophthalmology found contact with the tree’s sap led to bullous dermatitis and acute keratoconjunctivitis.

Bullous dermatitis is blisters on the skin caused by an irritation, and acute keratoconjunctivitis is an inflammation of the cornea and conjunctiva of the eye.

The article includes photos of ulcers and corneal defects caused by contact with manchineel sap.

In 2011, Guinness World Records named the manchineel the “world’s most dangerous tree” because of the severity of the poison in its fruit and sap.

“Even standing under it in the rain is enough to cause blistering if the skin is wetted by raindrops containing any sap,” the record entry reads.

A consultant radiologist, Nicola H Strickland, gave an account of she and a friend eating one of the manchineel tree’s fruit, commonly known as a “beach apple”:

“We noticed a strange peppery feeling in our mouths, which gradually progressed to a burning, tearing sensation and tightness of the throat. The symptoms worsened over a couple of hours until we could barely swallow solid food because of the excruciating pain and the feeling of a huge obstructing pharyngeal lump.”

Yes, the tree is considered the “world’s most dangerous”. The toxicity of the fruit even makes it impossible for animals to digest and disperse their seeds, so the tree depends on the tides and currents of the coast, says the magazine BBC Wildlife.

South Africa ‘most dangerous country in the world to drive in’? Testing widely reported claim by driver education company

“Staggering” and “frustrating” were just two of the words Zutobi used to describe the country’s road safety. But did its evidence make the g...

The country is infamous for high rates of crime and violence. But a widely reported crime ranking of its cities was based on the perceptions...