Yes, Russian court gave US teen only months in prison for marijuana smuggling – but basketball star Griner got nine years for lesser crime

A Russian court sentenced Brittney Griner, a basketball star from the US, to nine years in prison for bringing a small amount of marijuana into the country. By contrast, US teenager Audrey Lorber was given a slap on the wrist for a slightly more serious case of the same crime.

That’s according to a screenshot posted on Instagram and shared in South Africa in early August 2022.

It shows a photo of Griner next to one of another woman, below two paragraphs of text.

The first paragraph reads: “Brittany Griner 31 year old American – convicted of smuggling 0.7 grams of THC into Russia on a trip to play basketball for a Russian team. Sentenced to 9 years and fined 1,000,000 rubles. 2022.”

THC stands for tetrahydrocannabinol, the marijuana compound that produces the drug’s high. The ruble, often spelled as rouble in English, is Russia’s currency, with the symbol ₽. As of 11 August, US$1 was worth just over ₽60.

The screenshot’s second paragraph reads: “Audrey Lorber 19 year old American. Found guilty of smuggling 17 grams of THC into Russia while on a family vacation. Released after a two month detention and fined 15,000 rubles.”

Russia’s arrest and trial of Griner has been widely reported across the world. Her harsh nine-year sentence has been linked to the country’s worsening relationship with the US after it invaded Ukraine on 24 February.

Was another US citizen, Audrey Lorber, given a far lighter sentence than Griner for bringing a full gram more of THC into Russia? 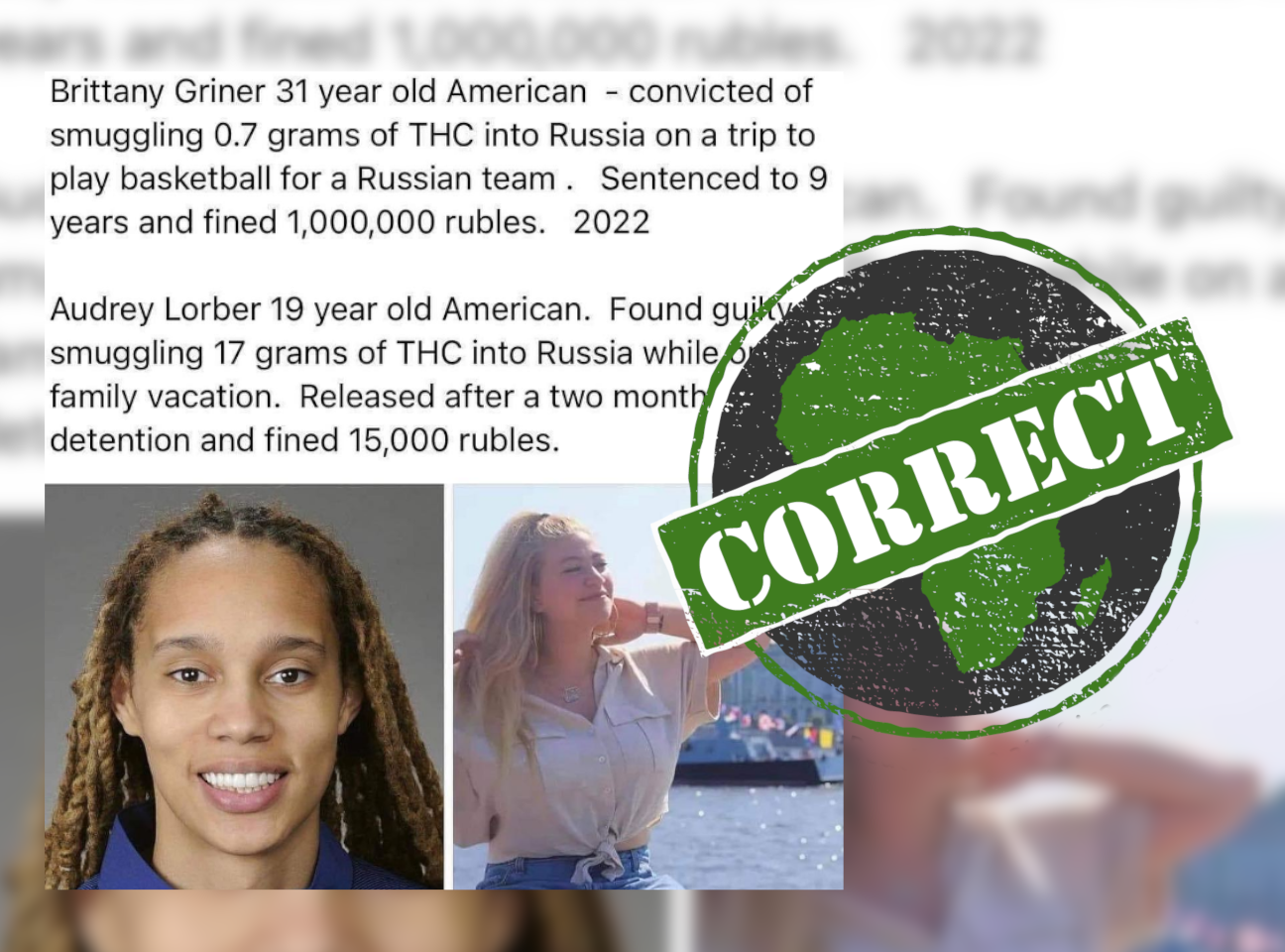 The case of Brittney Griner

On 17 February 2022 Griner arrived at an airport near Moscow to play in the US off-season for UMMC Ekaterinburg, the Russian women’s basketball team she’s been a part of for the past seven years.

But airport authorities reportedly found four vape cartridges of hash oil, a concentrated form of cannabis illegal in Russia, in her luggage. The amount was equivalent to less than a gram of cannabis.

Almost six months later, on 4 August, a Russian court found Griner guilty of “smuggling and storing illegal drugs” and sentenced her to nine years in a prison labour camp, plus a ₽1 million fine.

Griner had been using the hash oil to alleviate her severe chronic pain from basketball injuries.

In the US, medicinal marijuana is legal in 38 of the country’s 50 states, as well as in the District of Columbia and the territories of Puerto Rico, Guam, the Northern Mariana Islands and the US Virgin Islands.

The case of Audrey Lorber

In September 2019, according to several credible reports, a Russian court freed 19-year-old New Yorker Audrey Lorber after having found her guilty of “attempting to import marijuana purchased in the US into Russia”.

Lorber had been jailed in Russia for more than a month. She was arrested at an airport in St Petersburg after 19 grams of marijuana were found on her. Lorber had a US prescription for medicinal use of the drug.

The court fined her ₽15,000. But, according to CBS, she was “credited for time served, released and exempted from paying the fine”.

The screenshot is correct. Russian courts gave Brittney Griner and Audrey Lorber, both US citizens, vastly different sentences for the same crime – although in 2019 and 2022, three years apart.

And the relationship between the US and Russia was also vastly different in 2019 and 2022.