“There’s a song that’s been proven to reduce anxiety by 65%,” reads text on a graphic circulating on Facebook in South Africa. “It’s called Weightless by Marconi Union, and it was specifically designed to slow your heart rate, reduce blood pressure, and lower cortisol levels.”

Cortisol is our main stress hormone, which raises the level of sugars in our bloodstream and improves the brain’s ability to use those sugars, and increases the availability of substances that help repair tissues.

It also “curbs functions that would be nonessential or harmful in a fight-or-flight situation,” says the US-based Mayo Clinic.

The graphic has been viewed more than 23,000 times in just 24 hours. But Facebook’s fact-checking system has flagged it as possibly false. What’s the truth here? 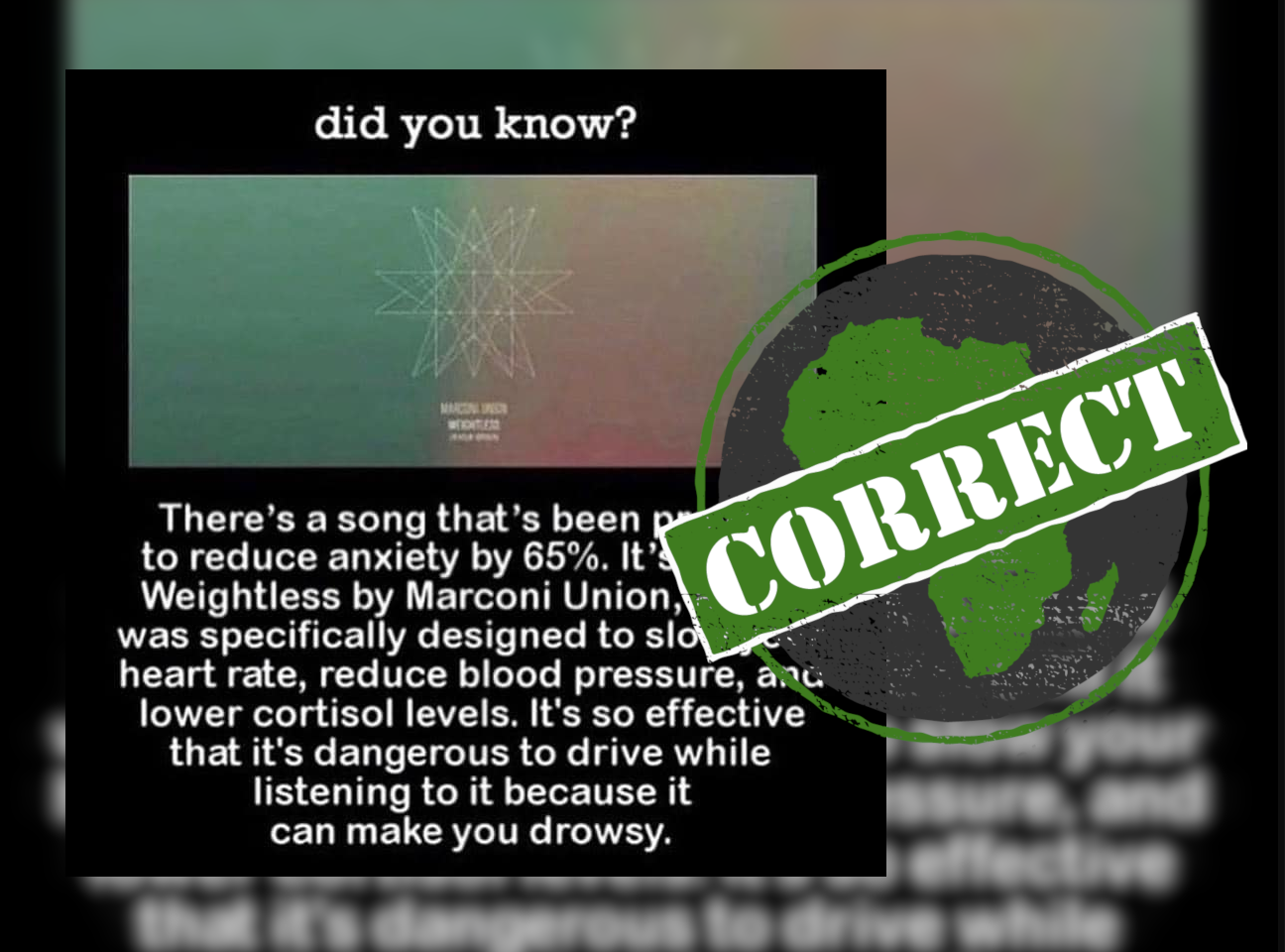 Marconi Union are an English musical trio made up of Richard Talbot, Jamie Crossley and Duncan Meadows.

Their song Weightless is an eight-minute instrumental composition produced in 2011, with extended versions.

A Google search for “Weightless by Marconi Union and anxiety” brought us to a 2019 study by the British Academy of Sound Therapy.

After measuring the level of relaxation in activities such as drinking tea, taking a walk, playing video games, getting a massage and listening to music, the study found that the track Weightless induced the greatest relaxation score.

“Weightless managed a relaxation score of 73%. This equates to an increase over other music of nearly 11% as well as a 6% increase over the massage.”

A flyer by the college of pharmacy at the University of North Texas Health Science Center rates Weightless at number one on their top 10 songs for reducing anxiety.

Time magazine included the song in a list of the 50 best inventions in 2011.

An article by Harvard Medical School examines the role of music in healing.

“Surgeons have long played their favourite music to relieve stress in the operating room, and extending music to patients has been linked to improved surgical outcomes,” it reads.

But what can it do for blood pressure and cortisol levels? One study found that listening to a certain type of music could serve to reduce high blood pressure. This means music therapy “may be an alternative for hypertension treatment”.

Another small study reviewed by the British Heart Foundation found that in order for music to reduce blood pressure in some patients, the music should “have no lyrics, have few changes in volume or rhythm, have harmonies that ‘are not rousing’, and that certain parts of the music should be repeated in intervals”.

The University of Nevada says that current findings “indicate that music around 60 beats per minute can cause the brain to synchronise with the beat causing alpha brainwaves” – the brainwaves present when we relax.

“To induce sleep, a person may need to devote at least 45 minutes, in a relaxed position, listening to calming music.”

Researchers at Stanford University also note that “listening to music seems to be able to change brain functioning to the same extent as medication”.

Medical News Today, a web-based outlet for medical information and news, says that music has shown to reduce stress hormones, such as cortisol levels.

It cites a small study that looked at the levels of cortisol after not only listening to music in a controlled setting but also at a live concert.