A graphic circulating on Facebook points accurately to high levels of unemployment for black South Africans. But while both the absolute numbers and the rate have grown since 1994, the graphic gets the figures wrong.

A graphic widely shared in South Africa appears to lay bare in stark numbers the agony of high unemployment in the country. 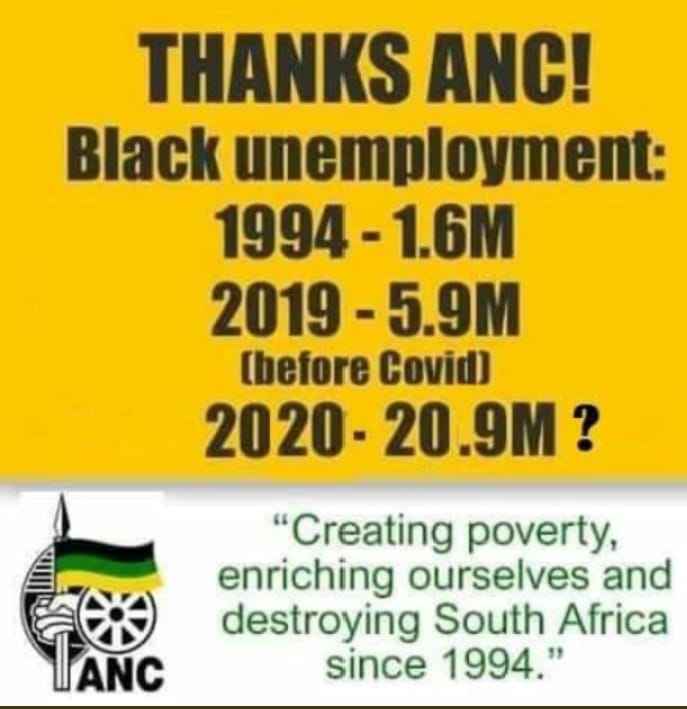 The graphic, posted in June 2021 on Facebook, makes the claim that black unemployment was at least 10 times more in 2020 than in 1994, when the ruling African National Congress (ANC) came to power.

At the bottom of the graphic is the ANC’s logo and next to it is written: “Creating poverty, enriching ourselves and destroying South Africa since 1994.”

The graphic has since been shared more than 19,000 times. But does it accurately depict black unemployment numbers since 1994?

Statistics South Africa, the country’s official data agency, uses regular surveys to collect information on the size of the working population (all persons between 15 and 64) and the labour force (all persons that are employed or unemployed).

Those not in employment are categorised as:

Stats SA also has information on those who are not economically active. This includes groups such as university students and adults caring for children at home.

(Note: For details on how unemployment is measured in South Africa, read our factsheet.)

However, a 2013 study found there was little to distinguish between unemployed people and discouraged job seekers.

The study, by University of KwaZulu-Natal academics, also argued that the expanded definition, not the strict, provided “a better reflection of the relationship between labour supply and labour demand in the South African labour market”.

As striking as the numbers in the graphic are, they are not accurate. The graph below shows the absolute numbers for black unemployment in 1994, 2019 and 2020.

Absolute numbers can be ‘misleading’

Compared to 1994, the numbers show unemployment in 2020 has at the very least doubled, nearly tripling when the official definition is considered. The data shows 10.1 million unemployed in 2020, half as many as claimed by the graphic.

But looking at absolute numbers alone when tracking unemployment over time can be misleading, experts say.

Derek Yu is an associate professor at the University of Western Cape and a senior researcher at University of Cape Town’s Development Policy Research Unit. He previously told Africa Check that it was important to take both the absolute employment numbers and the rates into consideration.

Africa Check has previously found that this was because the population, and by extension the workforce, also increased over time.

Dr Thabi Leoka is an economist at Argon Asset Management, an investment firm based in Cape Town.

The graph below shows black unemployment rates for the same three years of interest.

The data shows unemployment rates have also increased, but at a slower pace.

South Africa is at the time of writing under a rolling state of disaster, first declared in March 2020 in response to the Covid-19 pandemic.

On 23 March 2020, president Cyril Ramaphosa announced a “hard lockdown” which among other restrictions curbed movement and business operations.

The National Income Dynamics Study-Coronavirus Rapid Mobile Survey analysed a nationally representative sample of 7,000 people to measure the impact of the pandemic.

It found that 3 million fewer people were employed from February to April 2020, an 18% decline in employment.

Argon Asset Management’s Leoka said that unemployment was driven by a stagnant economy.

“The economy is not absorbing labour. Sectors that should drive growth such as manufacturing, mining and agriculture, as they are high labour sectors, are not growing.”

In June 2020 Stats SA surveyed businesses and found that one in four, or 25.8%, had laid off staff in the short term while another 26.8% expected their workforce to shrink.

In a 2019 report, Stats SA found that black Africans had the highest unemployment rates, at higher than 30%. Whites had the lowest at 7.4%.

The report, titled Inequality Trends in South Africa: A multidimensional diagnostic of inequality, used data from 2011 to 2017.

“In addition to having worse employment outcomes, black Africans also earn the lowest wages when they are employed,” the report said.

“Whites, in contrast, earned substantially higher wages than all other population groups. Their monthly average real earnings were more than three times higher than those of black Africans.”

Werner Ruch is the director of poverty and inequality statistics at Stats SA. He told Africa Check that the factors underlying South Africa’s inequality were diverse.

“While there are various issues that define and shape the structure of the labour market, it is clear that the historical impact of apartheid policies are still casting a shadow on modern day South Africa,” he said.

Poverty and inequality were heavily intertwined, Ruch said. Poverty could in turn negatively affect educational outcomes and access to services such as healthcare, transport, water and electricity.

A viral graphic on Facebook claims that 1.6 million black people were unemployed in 1994, but in 2020 this had risen to 20 million, including dramatically by 15 million due to the Covid-19 pandemic

These numbers are incorrect. Figures from Stats SA indicated that as many as 4.16 million black people were unemployed in 1994, and as many as 10.1 million in 2020. The graphic’s claims are therefore incorrect.

But the available data does show black unemployment has increased over time. Analysts highlighted the legacies of apartheid and sustained poverty as some reasons for this. The pandemic has also deepened unemployment.