Are there 30 service delivery protests a day in South Africa?


The destruction of shacks in Hammanskraal and burning of schools in Vuwani have once more focused South Africa’s attention on so-called “service delivery protests”.

Most recently, the South African Broadcasting Corporation decided not to show footage of people burning public institutions like schools in any of its news bulletins. This sparked outrage and a formal complaint against the “ban”.

But just how many protests take place daily in South Africa?.

A reader asked us on Twitter whether there are “30 service delivery protests a day as was said in parliament”.

She was referring to a question-and-answer session with President Jacob Zuma in May when a member of the United Democratic Movement opposition party, Mncendisi Filtane, began a question by saying that “South Africa records about 30 service delivery protests a day, every day”. 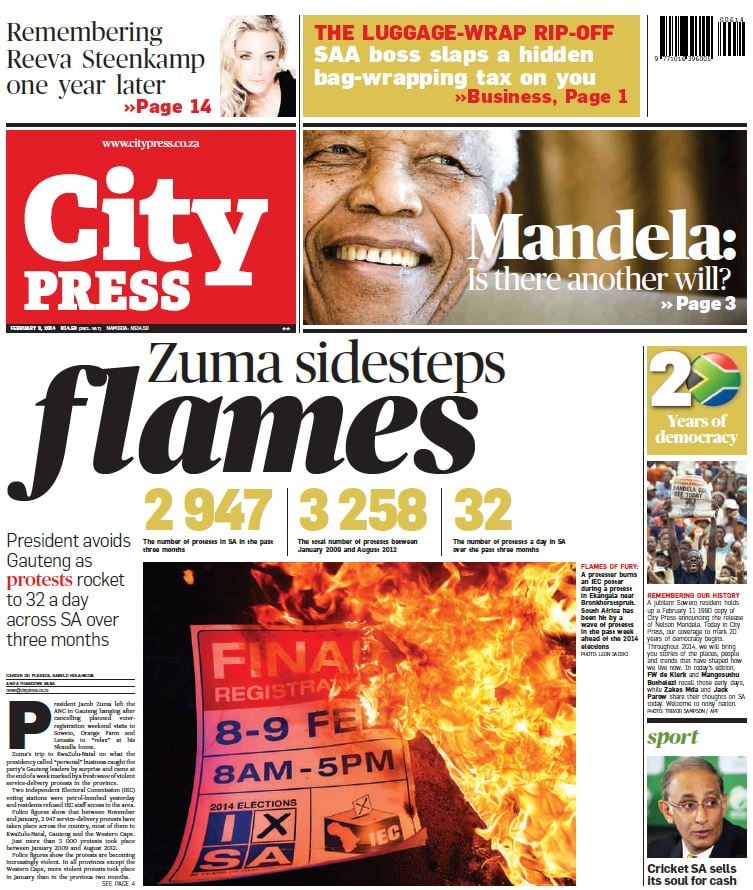 Africa Check managed to trace the source of the claim to the front page of Sunday newspaper City Press on 9 February 2014.

Above a picture of a raging fire engulfing an election poster, a banner read:

The claim then spread quickly.

South African journalist and columnist Max du Preez repeated the figure two days later in an opinion piece titled “Our protest culture is far from dead”. Two days after that a The New York Times article also mentioned the number by saying that “the [South African] authorities have recorded a staggering 3,000 protest actions in the past 90 days. The unrest has become almost routine.”

Police records 'not a protest database'

But as we explained in a report last year, South Africa’s police service does not record “service-delivery” protests.

When the police are called out to monitor and control crowds, the incidents are logged as "crowd-related incidents". This category is very wide and covers situations varying from sport matches to electoral campaigns.

Crowd-related incidents are furthermore divided into “peaceful” or “unrest-related” events. However, this depends on whether the police had to intervene and not on the crowd’s intention or behaviour.


The number of crowd-related incidents that the police record “cannot be equated with protests”, researchers from the University of Johannesburg’s Social Change research unit wrote in a wrote in a preliminary analysis of police data on crowd incidents released last year.

The unit specifically referred to the “erroneous” City Press front page, saying that the authors perhaps confused the police records of crowd-related incidents with service-delivery protests.

Project manager of the Crime and Justice Information and Analysis Hub at the Institute for Security Studies (ISS), Lizette Lancaster also thinks that the newspaper took all crowd-related incidents recorded for protests.

While the police incident recording system “can give some indication about the nature and number of protests... it is not a protest database”, Lancaster previously told Africa Check.

A group of protestors march towards burning tyres, in the street, during violent service delivery protests in Khayelitsha, in June 2012. Photo: AFP/RODGER BOSCH" />

Post-doctoral fellow at the social change research unit, Dr Carin Runciman, told Africa Check that at present “there is no reliable estimate of the numbers of protests in South Africa”.

The unit obtained records of all the crowd-related incidents recorded by the police between 1997 and 2013. For the past year, they have been analysing the more than 155,000 lines of data to work out how many of the “crowd-related incidents” were in fact protests. The results will be made available next week.

Several research institutes track the number of service delivery protests in South Africa using media reports, though. One such institute is Municipal IQ. Researcher Karen Heese said their latest data shows that at least 70 protests took place in the first four months of 2016, working out to about one every second day.

However, Municipal IQ only tracks service delivery protests against municipalities. Last year they recorded a total of 164 protests.

The ISS’s Lancaster said their data, compiled from media reports between January 2013 and December 2015, showed that “the average was about 3 protests and labour strikes a day”. But this referred to all kinds of protest, not just those related to service delivery, she added.

Media reports are bound to underestimate the true scale of protest, however. Runciman said their analysis shows “there is some evidence to indicate that media data can be a fairly reliable indicator of trends but not absolute numbers”.

Yet the number of protests in South Africa “is certainly not as high as 30 per day”, she added.

Conclusion: No data shows 30 service-delivery protests a day in SA

The way that the South African police records events where they are called out to perform crowd control makes it near impossible to figure out how many of these were "service-delivery protests". University researchers who looked at each entry between 1997 and 2013 concluded that it is nowhere near 30 a day, though.

Other research institutions compile media reports of protests into a database. The one from Municipal IQ showed one protest against municipalities every second day in 2015, whereas the Institute for Security Studies counted 3 protests (of all kinds, not just service delivery) and labour strikes a day between 2013 and 2015.

There is therefore no evidence to support the claim that South Africa experiences 30 protests a day.

Have protests in South Africa nearly doubled since 2010?

How many Nigerians abroad? And how much cash do they send home?

An online publication claims there are more than 15 million Nigerians in the diaspora who send home about US$25 billion every year. We fact-...