South Africa’s Gauteng and KwaZulu-Natal provinces have been rocked by days of looting, protests and violence. The immediate cause was demands that former President Jacob Zuma be freed from jail where he is serving a 15 month sentence for contempt of court.

At least 10 people have been killed and more than 500 people arrested.

On 12 July 2021 president Cyril Ramaphosa announced that the army would be deployed to help police respond to the violence.

Social media has been flooded with videos claiming to depict the protests. Many of the videos are accurate, showing legitimate news footage and events captured by the public.

However, Africa Check identified a number of false and misleading videos that are being shared without verification. This has the potential to further stoke unrest and make the job of responders even harder.

To draw attention to this, we fact-check three videos and a voice note. We also provide tips on sorting fact from fiction.

Water cannon video is from Venezuela 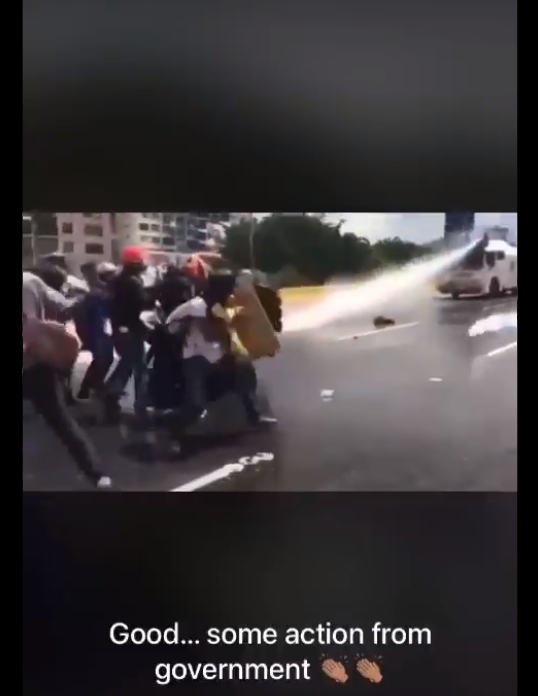 A video shared on Facebook, TikTok and Twitter shows protestors fleeing as police fire tear gas and water cannons. A number of people are blasted off their feet by the force of the water.

The caption reads: “A water cannon for riots in South Africa.”

Some protestors in the footage were carrying homemade wooden shields painted with yellow, blue and red stripes - much like those on the Venezuelan flag. With that clue, we were able to find footage of Venezuelan protests against the government of Nicolas Maduro in 2017.

Protestors can be seen carrying homemade shields bearing Venezuelan colours and other symbols used by the protestors, like the red Templars’ Cross. Shields like these also appear in the video shared in South Africa.

The white armoured vehicles of Venezuela’s national guard (the GNB) match those shown in the video. The same distinctive yellow road barriers can be seen in videos of the protests and in the video shared in South Africa.

The video shows protest action in Venezuela more than three years ago.

Tip: Look for clues in the video to verify where it was taken. This can include flags, writing and unique buildings or structures.

Video of military vehicles is from Covid-19 lockdown 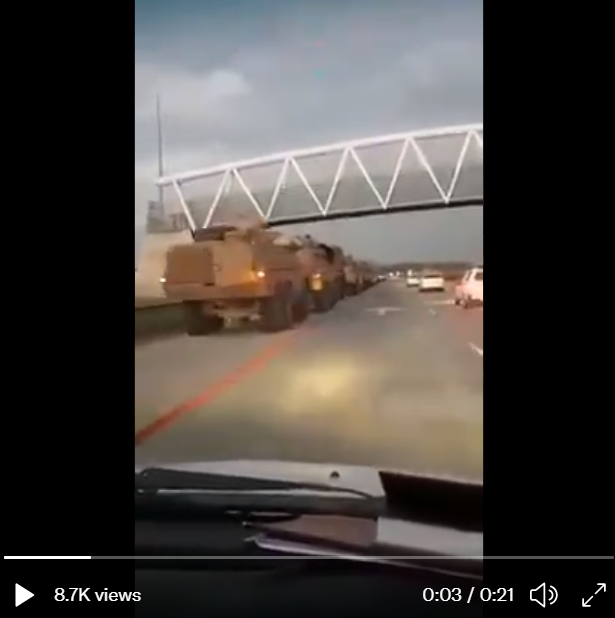 A video posted on Twitter on 12 July 2021 shows brown military vehicles parked on the side of a freeway.

“Now things are getting interesting,” the caption reads. The user goes on to say that “sheeps will be dealt with by the #SANDF #FreeZumaNow #ZumaUnrest #JacobZuma no thug will be released from prison cause of thugs🤣🤣”.

Using Twitter’s advanced search functions Africa Check was able to find the same video posted on 24 March 2020. It reads: “Stay indoors guys this isn't a joke! The SANDF ain't about to play games!!”.

On 23 March 2020 president Cyril Ramaphosa announced a 21-day lockdown beginning on 27 March to control the Covid-19 pandemic He deployed the South African National Defence Force “to support the South African Police Service in ensuring that the measures we are announcing are implemented”.

The video of military vehicles on the freeway is not from the current unrest but from more than a year ago.

Tip: Using advanced functions you can refine your search to certain times and areas.

Police have not instructed public to ‘shoot to kill’ 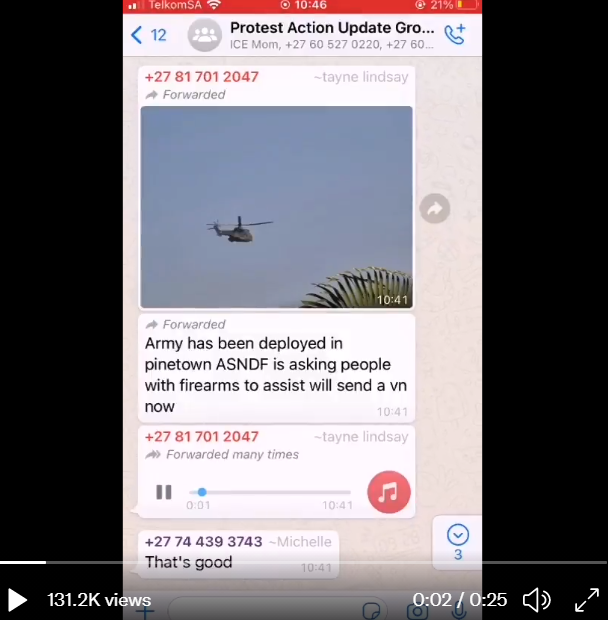 A viral WhatsApp voice note posted on Twitter claims that grocery retailer the Spar Group arranged for the army to be deployed. It also claims the South African Police Services (SAPS) had asked for assistance from the public.

“The police have put a thing out to say armed civilians please come and assist all areas and ja, shoot to kill basically,” the voice says. It was posted on 12 July 2021.

The voice note is shared as a screen recording of a WhatsApp group which shows that it has been forwarded many times. The recording on Twitter has been viewed over 127,700 times while the tweet has been retweeted over 1,600 times.

The person speaking in the voice note does not identify themselves or state where they are from.

“The police never issued a statement requesting communities with firearms to assist,” she explained. “The police only urge law abiding citizens to report incidents to their nearest police stations or to send tip offs on MySAPS if they know of any plans to disrupt stability in the country.”

At a security cluster briefing on 13 July 2021 police minister Bheki Cele urged civilians “not to take the law into their own hands”. 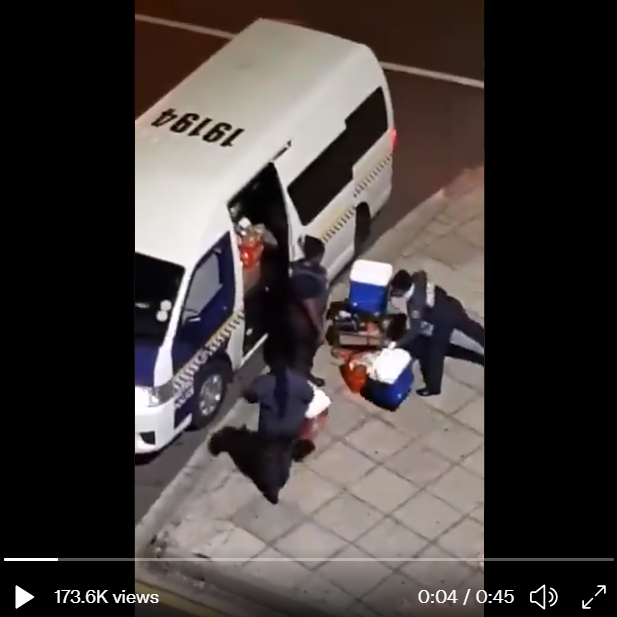 “Durban metro police seen loading their van with looted goods. DISGRACEFUL!!!” This is the caption of a video shared on Twitter on 12 July 2021 with more than 172,000 views and 1,500 retweets. The same video is circulating on Facebook.

The video shows police officers loading a police van with shopping bags before driving down a street lined with looters and protestors.

In a press release, officials from the municipality said they had conducted an investigation due to public concerns.

“Upon a preliminary investigation it was determined that the officers were not looting, but rather confiscating the goods from looters and recovering items that were abandoned by those criminal elements who were looting,” the municipality said. “In terms of police procedure and policy, all items recovered have been made in a SAPS register.”

“Hundreds of people have been detained with the evidence loaded in the vehicles. In terms of the law, the suspect, together with any evidence, must be taken to the police station and this is what has happened.”

Tip: Seeing isn’t always believing! It’s easy to misinterpret a video without knowledge of the event. Check the facts before sharing misleading information.

You rely on us for factual information, we rely on you.

GUIDE: How to verify images on your smartphone

This step-by-step guide explains how to do a reverse image search to check whether the photo you saw on social media is the real thing.

GUIDE: How to spot cheap, out-of-context and deepfake videos

Video can be easily manipulated, misrepresented and created. This is a guide to spotting three types of misleading videos.

GUIDE: How to verify breaking news, in a year of crisis

2020 has not been short of major news events – and the year’s not over yet. How can you know if what you are seeing reported is accurate?