There isn't enough data on skin bleaching in South Africa.

A reader recently asked us to verify a claim about the use of skin bleaching creams in South Africa, one they said they had come across several times.

The request linked to a video by Unreported World, a UK-based documentary maker. For an episode titled “Skin bleaching scandal”, they had visited South Africa to establish the extent.

The use of skin bleaching creams was on the rise in the country, the documentary found, despite it being illegal to sell them.

“Skin bleaching creams are big business. A recent study suggested one in three South African women buy them,” the video says. It was published on YouTube in November 2018 and has been viewed at least 2 million times, attracting more than 12,000 comments.

The reader asked us to verify if a third of South African women buy skin lightening creams, how the study that came to that number was done and if there was any sales data to back up the claim.

We went in search of answers.

Study of 579 patients in Durban

The documentary interviewed Dr Ncoza Dlova, the head of department of dermatology at the Nelson R Mandela School of Medicine.

We asked Dlova about the statistic in the video, and she sent us a 2014 study on women’s perceptions of skin lightening creams. She was one of its researchers.

The study surveyed 292 Indian and 287 African women aged 18 to 70. The women were patients attending the general outpatient departments (excluding dermatological clinics) of two regional hospitals in the South African city of Durban. These were the RK Khan and Prince Mshiyeni Memorial hospitals, which the survey said served a large black African and Indian population.

“Of these 32.3% (131) had used skin‐lightening products (60% of Africans and 40% of Indians),” the study found. Two thirds cited medical use, while the rest said they wanted to lighten their skin.

It added: “Making the broad assumption that our results broadly represent prevalence of use nationally, this would translate into considerably more than 4 million users among the African and Indian adult female population.” 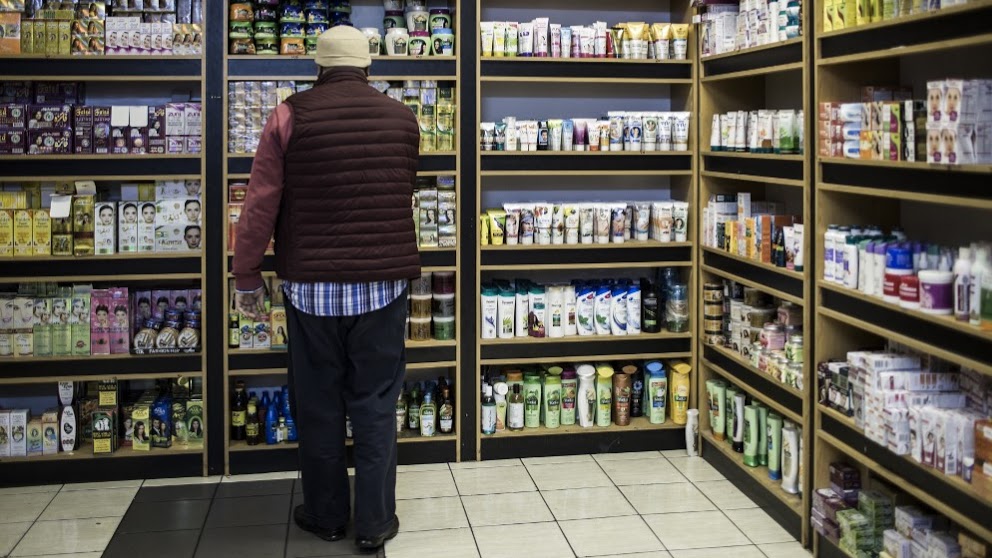 A shop owner arranges his products many of which are used for skin lightening in the Fordsburg suburb of Johannesburg in July 2018. Photo: AFP/GULSHAN KHAN​​​​​​​

We asked Dlovo if the results of the study could represent skin bleaching use in all of South Africa.

She then shared a meta-analysis of skin bleaching globally published in 2019 in the International Journal of Dermatology. A meta-analysis is a pooling of available research on a topic to draw a stronger statistical conclusion.

Sixty-eight studies published from 1972 to 2017 were included, 40 of which were on Africa, and four on South Africa - including Dlova’s 2014 study.

The study found that the prevalence of skin bleaching in Africa was 27.1%. But it didn’t calculate a prevalence rate for South Africa.

‘Difficult’ to get South Africa’s rate from study

Calculating a rate for South Africa from the studies in this wider research was “difficult”, Dr Dominic Sagoe, the author of the meta-analysis and an associate professor at the University of Bergen, told Africa Check.

This is because “two of the studies are old (1982, 1989) and the studies have methodical limitations such as design and sampling that limits their generalisability”.

No finding on how many women buy creams

But “overall, the South African studies were good. They were of high to moderate quality”.

Sagoe said his analysis did not specifically investigate prevalence of skin bleaching in South Africa. “That work was done by Dlova and her colleagues and their results support the assertion that ‘600 women completed the questionnaire, of whom 32.7% reported using skin lightening products’.”

Dlova’s study did not make a finding on how many women buy skin bleaching creams. But she has also researched the best-selling skin-lightening creams in Durban. In 2012, she found that “of the 10 top‐selling creams nine (90%) were found to contain banned or illegal compounds”.

What goes into skin lighteners?

This is according to a 2016 paper on skin lightening use in sub-Saharan Africa, co-authored by Prof Lester Davids while at the University of Cape Town. He was also interviewed by UK documentary maker Unreported World in a much viewed episode on South Africa.

Skin bleaching creams are used cosmetically to lighten skin colour or to treat dermatological conditions. They work by reducing the concentration or production of melanin. This is the pigment that gives skin its colour and helps protect it from the sun.

While many substances go into them, Davids’s paper identifies the “Big Four”: mercury-containing compounds, hydroquinone and its derivatives, potent corticosteroids and retinoids. Skin lightening products containing mercury and hydroquinones are banned in South Africa.

(Note: According to the UK’s National Health Service, many alternative skin-lightening products containing natural ingredients are available online and in shops without prescription. These are legal and unlikely to be harmful, but there's no guarantee they work.)

Davids previously told Africa Check it was difficult to keep track of how much of the ingredients of interest were in skin lightening products in South Africa, whether legal or illegal. This is because the country’s Cosmetics, Toiletries and Fragrances Association considers “skin brighteners” to be a cosmetic, not a drug.

“As soon as you label something as a cosmetic it falls under the CTFA,” Davids said.

Products not always accessible for testing

Products banned for their hydroquinone or mercury content were not “always accessible for testing”, he said. These ingredients could be imported separately – such as mercury for use in photography or paints - and then diverted to skin lighteners, he said.

In South Africa using the word “lightening” on products is banned, but the terms “brighteners” or “even toners” can be used. Products that contain bleaching agents in any quantity are also illegal.

This is according to Adelia Pimentel, executive director of the CTFA. The cosmetics industry currently self-regulates but new rules expected in 2019 would try to keep track of illicit products smuggled into the country, she told Africa Check.

Many skin lightening products were unregulated and might contain harmful substances, so there wasn’t a public health danger “per se” in overestimating their use, Dr Maia Lesosky previously told Africa Check. Lesosky is an associate professor at the school of public health’s epidemiology and biostatistics division at the University of Cape Town.

“Overestimation may lead to increased scrutiny by policy makers or such because there is a harm associated with [unregulated] product use.”

Calling it a “scandal”, an international documentary said a third of South African women buy illegal skin lightening creams. But the study they used was not nationally representative - it only surveyed 579 women attending two hospitals in Durban.

A wider study found sub-Saharan Africa had a skin bleaching prevalence of 27.1%, but did not work out how widespread it was in South Africa.

There aren’t enough studies that represent all of South Africa, so it’s difficult to gauge the country’s use of skin bleachers.

There isn't enough data on skin bleaching in South Africa.