South Africa will hold municipal elections on 1 November 2021. We look at claims about service delivery, the economy and more in the election manifesto of the ruling African National Congress.

South Africans are set to vote for district, metropolitan and local municipal council representatives in the upcoming local government elections.

The African National Congress is the ruling party. In the 2016 local government elections the party won a majority in 161 municipalities. Its election manifesto is titled: “Building better communities together.”

In the report we examine a promise to improve the time in which mining licences are issued. We also fact-check claims about free basic services, economic growth, access to healthcare, housing, land and job opportunities.

Promise: “[We will] reduce the current timeframes for mining licences by 50% ...”

Verdict: This is a national government competency.

The Mineral and Petroleum Resources Development Act of 2002 deals with the administration of mining licenses. Chapter 4 makes the department of mineral resources responsible for processing these licences. The department’s regional managers accept applications for mining licences within their assigned area. The applications are then sent to the minister for consideration. 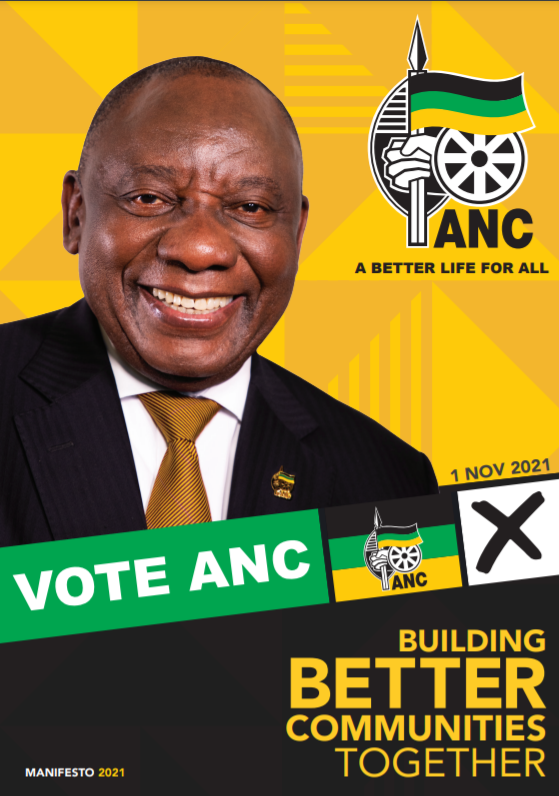 Dr Andrew Siddle is an adjunct professor of corporate governance in the College of Accounting at the University of Cape Town. He told Africa Check that only the minister of mineral resources has the authority to grant mining licences.

“Local government has absolutely no role whatsoever to play in the issuing of mining rights,” he said.

“This proposed measure is in the context of reducing red tape and the cost of doing business which impact on all tiers of government,” she said.

“Mines are located in towns that rely on them to a significant extent for their economic activities and downstream and upstream linkages."

Gross domestic product (GDP) is the measure of a country’s economy. It is the total market value of all final goods and services produced in a country in a specific time.

“This statistic derives from treasury, Stats SA and SARB [the South African Reserve Bank] and [is] based on the size of our economy (gross domestic product figures),” she said. “The size of SA’s GDP was R1.1 trillion in 1994. In 2019 it was R5.1 trillion according to StatsSA, August 2020 GDP report.”

But these figures indicate that the economy grew 4.6 times between 1994 and 2019 – not 10 times. Potgieter did not say whether the figures represented nominal or real GDP.

Nominal (or current) GDP calculates a country’s GDP using market prices, and so includes inflation. Nominal data from the World Bank shows that South Africa’s GDP was R496.23 billion in 1994 and increased just over 10 times to R5.08 trillion in 2019.

“The claim might be more or less accurate if GDP is measured in nominal terms, but any comparison on a nominal basis makes such a claim pretty meaningless,” he said.

ANC president Cyril Ramaphosa made this claim in his speech at the party’s manifesto launch.

Some of the sources did give statistics on access to water and electricity, but they did not provide information on free access to these services.

We were, however, able to verify this claim using Stats SA’s non-financial census of municipalities for 2019, its most recent.

The census says 3,015,120 domestic consumer units received free basic water services in 2019. This is currently 6,000 litres of water a month per household within 200 metres of the dwelling.

Free basic electricity services amount to 50 kWh a month for grid and non-grid connected households. According to the department of energy, this is enough to power basic lighting, a small black and white TV, a small radio and for “basic ironing and basic water boiling”.

Domestic consumer units are the same as households, but Stats SA prefers this term because some households – such as a block of flats or a household with a garden flat – have more than one unit.

Potgieter told us the headcount referred to “the number of people that access healthcare facilities” or “visits per annum”.

“The detailed breakdown and calculation was extracted from the department of health’s 2019 District Health Information Systems,” she said.

But Foster Mohale, director of media relations and communications at the department of health, declined to provide the data needed to verify this claim.

“These are political questions and as the department we wouldn't want to enter that terrain,” he wrote in an email. (Note: The department has on numerous occasions assisted Africa Check in verifying claims.)

Sasha Stevenson is head of the health rights programme at Section 27, a law centre focused on social justice. She referred us to the Health Systems Trust, an organisation that advocates for health equity through research and capacity development.

The PHC Headcount is the number of patients of all age groups who have used primary healthcare services. The data comes from the department of health’s 2019 district health information system.

But the Health Systems Trust did not have access to data for 1998. We could not confirm the headcount for this period. As such, we rate the ANC’s claim unproven.

“The ANC has … expanded access to housing to four million households."”

“The statistic quoted in the ANC Manifesto can be found on page 141 of the 25 year review report and in the 2018 StatsSA General Household Report,” ANC general manager Fébé Potgieter told Africa Check .

The report was published by the department of planning, monitoring and evaluation. It said that 3.18 million housing units were delivered from 1994 to 2018, with a further 1.09 million sites “serviced”. A “serviced site” is a piece of land connected to water, electricity, and sanitation where people can build their own house. It is not a newly built house.

This would mean that slightly more than 4 million “housing opportunities” had been supported as of 2019.

The department of human settlements has not updated its housing delivery statistics page since December 2017. But it reported in its 2019/20 annual report that “about 4.8 million” housing opportunities have been provided since 1994.

Experts have previously warned Africa Check that the department’s housing statistics “have not been independently verified and should be read with caution, as indicative rather than entirely conclusive”.

“[The ANC] redistributed 8.3 million hectares of land over the last 25 years …”

She said the data was from the department of agriculture, rural development and land reform.

In total the amount of land that was transferred through the redistribution and restitution programmes between 1994 and 2018 was 8,330,865 hectares.

How have the figures changed since then?

Africa Check previously found additional data from the commission on the restitution of land rights, the body responsible for the land restitution claims.

We could not find more recent figures for the amount of land transferred through redistribution.

“[The Presidential Employment Stimulus programme] has already provided opportunities to about 1 million people.”

The Presidential Employment Stimulus (PES) is part of a R100 billion stimulus programme to address the economic impact of the Covid-19 pandemic.

The first phase, implemented from October 2020 to September 2021, aimed to provide over 700,000 jobs and opportunities.

According to the PES website and a report released by the presidency, the first phase of the programme created 374,484 jobs, supported 120,634 livelihoods and retained 40,491 jobs. Livelihood support comes in several forms including funding schemes to supplement incomes in vulnerable careers, such as youth enterprises and small-scale farmers, which have lost income during the Covid-19 pandemic.

The ANC’s manifesto was launched on 27 September 2021. So at the time the claim was made, it was not correct.

The second phase of the programme was announced by public works and infrastructure minister Patricia De Lille on 14 October 2021. She put the number of jobs and livelihood opportunities created at 550,000, with “more still in implementation”.

Dr Kate Philip, the PES programme lead, told Africa Check that its second phase had already been launched. She said it was “providing an additional 556,890 direct opportunities through jobs and livelihoods, taking the total to over a million”.

Updates to the programme’s official tally are expected in November. For now, target numbers of planned PES opportunities are available in an update outlining the second phase of the programme. These include 556,890 “direct beneficiaries” of jobs or other support.

You rely on us for factual information, we rely on you.