Can dates really cure cancer? The claim is nothing but dangerous quackery

Can dates cure abdominal cancer more effectively than medicine and without side effects? This was the claim made in a recent article published by South Africa's Sowetan newspaper which listed ten “simple benefits” of eating dates, including increased sexual stamina, the treatment of anaemia, improved eyesight and lower cholesterol.

According to the article, the "best thing" about using dates as a cure for abdominal cancer is that it "does not have any side effect on the body and is completely natural as well as it works better than medicine (sic)".

Many websites seem to agree that dates offer a range of health benefits but a consensus on the matter is not sufficient evidence that it is true. Effectively dodging quackery requires careful interrogation of the evidence.

Take this article for instance. In an uncannily similar manner to the Sowetan, the authors write that dates can cure abdominal cancer. As proof they reference the American Cancer Society. The link they provide, however, is a decoy, leading instead to another site singing the praises of dates whilst selling vitamins, fish oil and herbal remedies in the sidebars.

The claims made are not robust 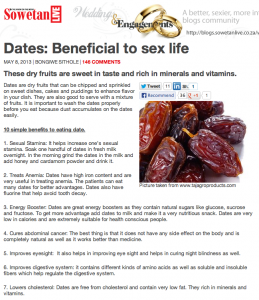 The scientific evidence for the healing power of dates as it might benefit humans is not robust. The fruit has, however, been the subject of a number of studies—which have been prone to abuse and unscrupulous extrapolation.

A 2009 review of the indigenous uses, phytochemistry and pharmacology of dates, concluded that existing research “validated” the traditional practice of using dates “against various kinds of tumours”.

As proof, the authors referenced a study where glucans (a specific type of carbohydrate molecule) were extracted from dates and injected into tumours, which had been transplanted into mice. After 30 days the tumour diameter in the treated group decreased and there were some cases of regression.

Whilst the researchers may have discovered anti-tumor compounds in dates, it is a far cry from concluding that dates can cure cancer in humans. For a start, the mice were injected with a compound that was extracted in a laboratory, using a highly specialised technique. Furthermore, the mice had the tumours transplanted into them and were later “sacrificed” so there is no telling how effective this would have been in the long term. And, rather obviously, the tests were done on mice.


Do a handful of dates a day keep the doctor away?


Dates are a nutritious fruit that could be included in a healthy diet. Surely that could assist in the prevention of cancer. Experts appear to differ on whether diet makes a significant difference, but the evidence seems to suggest: “not really”.

A recent review of a decade of research in the British Journal of Cancer  concluded that ditching bad habits like smoking and drinking may be more effective at preventing cancer than simply adopting a healthy diet.

An earlier observational study found no significant link between fruit and vegetable consumption and gastric cancer. Observational studies are not known to produce the most accurate research. Nonetheless, the evidence again, is not stacked in favour of dates as cancer prevention.


The health myths around dates may be partially explained by the plant’s ancient roots and on-going cultural significance. The date palm (Phoenix dactylifera) is thought to be one of the first plants to be domesticated, around 3000BC.

The palm tolerates the forbidding desert climate, offering shade and shelter. The fruit does not spoil easily and contains a high concentration of nutrients. This has made the date and its palm sacred to life in harsh semi-arid conditions, giving rise to its symbolic significance in Islamic and Christian scripture.

Due to its resilience and nutrient profile, there is continued interest in protecting and developing the date industry, including support from the Food and Agriculture Organisation (FAO) of the United Nations. 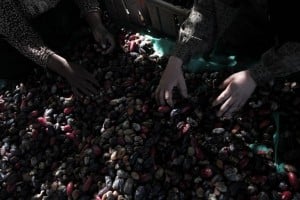 From the onset this claim smacks of quackery akin to former South African health minister Manto Tshabalala-Msimang’s claims that by consuming garlic, beetroot and lemon, HIV positive patients  could delay the onset of Aids.

Certainly if dates were that effective, doctors would be prescribing those instead of surgery, radiation or chemotherapy.

There is no scientific evidence that eating dates will cure abdominal cancer or any other cancer for that matter.

What there is, however, is an abundance of misinformation and misrepresented research on the medicinal benefits of the date. Telling the difference requires scrutiny.

Sadly, the health pages of too many newspapers, rather than serving the purpose of informing and providing accurate information, churn out gimmicky stories like this in the hope of attracting readers. Cancer can be a terminal illness and having even a few people believe they can cure it by eating dates is unethical at best and at worst, could be fatal.

As for dates being beneficial to one’s sex life, as the article’s headline would make us believe, perhaps going on dates rather than eating them would be more effective.