Devoid of the usual pomp and ceremony, and addressing a mostly empty parliament, South African president Cyril Ramaphosa highlighted his government’s efforts to counteract economic decline in a pandemic.

Nine claims about the state of South Africa

In a speech rich with comparisons between South Africa and fynbos, a type of natural vegetation, Ramaphosa spoke of the resilience of the country’s people.

“This is no ordinary year, and this is no ordinary state of the nation address,” he said. Indeed, to comply with Covid-19 restrictions, Ramaphosa’s address differed from previous years. Fewer people were present in parliament and many of the ceremonial aspects were scrapped.

As always, Africa Check listened out for key claims made by the president. Did he stay on the right side of the facts? Here’s what we found.

The size of an economy is measured through its gross domestic product (GDP). This refers to the value of all goods and services produced in a certain period, usually a year.

To track economic growth over time, GDP should be measured in real terms. This removes the effect of inflation.

There were 1.7 million fewer people employed in the third quarter of 2020 than there were in the first quarter. Our unemployment rate stands at a staggering 30.8%.

All social grants were increased during the Covid-19 pandemic. A special “social relief of distress” (SRD) grant of R350 per month was also introduced for people who were unemployed and not receiving any other form of social grant or unemployment insurance payment.

Figures in line with national survey

The latest government data on the number of grant recipients is from July 2020.

The South African Social Security Agency (Sassa) reported that there were 18,369,977 social grants paid to 11,412,303 beneficiaries in July 2020. A person can receive more than one grant, for example a parent might receive multiple child grants.

(Note: Other tables in the Sassa report put the number at 12.6 million beneficiaries. We have asked Sassa for an explanation for this discrepancy.)

This is in line with figures from the National Income Dynamics Study – Coronavirus Rapid Mobile Survey (NIDS-CRAM). It estimated that 11.9 million people were recipients of social grants in June 2020.

Tim Köhler is a junior researcher and PhD candidate at the University of Cape Town’s Development Policy Research Unit and the communicating author on the NIDS-CRAM report. He told Africa Check that they estimated between “10.6 million to 13.3 million” people received grants from May to October 2020.

These figures do not, however, include people who received the SRD grant.

“The numbers vary per month, as applications are validated monthly and someone who may have received the grant in one month may not qualify for the grant in the following month,” Dianne Dunkerley, executive manager of  grants administration for the department of social development, told Africa Check.

However, the department said that the highest number of people who received the grant in a single month was just over 6.1 million people. This was in October 2020.

Combining the 11.4 to 12.6 million people who received additional social grants with the 6.1 million who have received the SRD grant, gives a total of between 17.5 and 18.7 million recipients. We rate the claim correct.

“Through the implementation of the poultry master plan the industry has invested R800 million to upgrade production. South Africa now produces an additional 1 million chickens every week.”

South Africa’s department of trade, industry and competition met with the poultry industry in December 2020. They reviewed progress on a poultry “master plan”, signed into effect on 7 November 2019, which aimed to increase state support to local poultry farmers.

Poultry industry representatives reported to the department that they had produced 1 million additional chickens every week since the plan was signed into effect.

But the industry reported investing R1.1 billion into upgrading and improving production – not R800 million as the president stated.

Izaak Breitenbach, a general manager at the South African Poultry Association, told Africa Check that he had supplied Ramaphosa’s office with the statistic. The association obtained their statistics from an audit of chicken producers.

This translated to an increase of 1.4 million chickens slaughtered per week.

Breitenbach attributed the increase to the additional R1 billion invested by the poultry industry, which boosted the production capacity of the industry by 5%.

The Presidential Employment Stimulus is a R100 billion project announced in April 2020. The project, which started in October, is intended to provide financial support, protecting existing jobs during the Covid-19 pandemic and as the economy recovers, creating new job opportunities over several years.

The latest figures from a progress report published on 9 February 2021 show that 433,167 opportunities have been supported by the programme. This was made up of “342,827 jobs” (newly created or existing) and “90,340 livelihoods”.

As Ramaphosa also noted, a further 186,879 opportunities are currently recruiting or accepting applications.

An example of the stimulus provided is an initiative by the department of social development intended to provide financial support to early childhood development programmes. According to the presidency, this programme will support 108,833 workers. It is not clear how many of these are new jobs.

Another example is the Subsistence Producer Relief Fund through the department of rural development, which supports livelihoods by providing financial support to self-employed farmers impacted by Covid-19.

The day before the president’s address, a number of South African news agencies – among them eNCA, Times Live and the Citizen – misreported the numbers released by the presidency.

News channel eNCA reported that “the presidency said 600,000 jobs have been created under the presidential employment stimulus plan announced in October”.

This is incorrect. The stimulus aims to create new jobs but it is also supporting existing jobs and livelihoods. And 186,879 opportunities are currently recruiting or accepting applications – they have not yet been filled.

Eskom is the “largest greenhouse gas emitter” in South Africa.

Eskom is South Africa’s national power utility. Data from Statistics South Africa shows that it produces 90% of the electricity used in the country.

In 2020 the department of environment, forestry and fisheries published a report on greenhouse gas emissions in South Africa by sector. These gases include carbon dioxide, methane, nitrous oxide and fluorinated gases. When released into the atmosphere they block heat from escaping the atmosphere, warming the planet.

The report measured carbon emissions in gigagrams. One gigagram is equal to 1 million kilograms. Carbon is released into the atmosphere through natural processes like volcanic eruptions and human activities like burning fossil fuels.

Data was collected from industry stakeholders such as Eskom, the oil and gas company Sasol and the department of mineral resources. Carbon emissions were then calculated using models obtained from the Intergovernmental Panel on Climate Change, a body established by the United Nations to assess science related to climate change.

38.1% of emissions due to energy and heat generation

According to the report, electricity and heat generation contributed 38.1% of greenhouse gas emissions. The second largest contributor was road transport which accounted for 12.15%. This was followed by manufacturing industries and construction at 5.54%.

The report said that electricity generation was the largest key greenhouse gas emitter in South Africa. It said this was because the country “mainly uses sub-bituminous coal which is abundantly available”.

Dr Andrew Marquad is a senior researcher at the University of Cape Town’s African Climate Development Initiative. He told Africa Check that while the report does not provide figures for specific companies, the vast majority of the emissions attributed to the electricity and heat production would be from Eskom.

“It is definitely true that Eskom is the largest greenhouse gas emitter in the country, by quite a long way. This is because of their large coal-fired power plants,” he said.

Africa Check asked the department of environment, forestry and fisheries to provide a breakdown for Eskom’s emissions. We will update this report when we get a response.

“In 2020, [South Africa] became the world’s second-largest exporter of citrus.”

Tyrone Seale, the president’s acting spokesperson, told Africa Check that the claim was based on data from the Citrus Growers Association of Southern Africa.

“There are a number of different sources of data,” Justin Chadwick, the association’s chief executive, told Africa Check. “Our information manager goes through all these sources to get an idea of the numbers.”

He said these data sources included the United States department of agriculture’s foreign service, the United Nation’s Food and Agriculture Organization, and the UN Comtrade database.

In 2020, the association published a report on industry statistics. But it only includes data for the 2019 export season.

It shows that in 2018/19, South Africa exported 2.1 million tonnes of fresh citrus. The only other country to export more than that was Spain, at 2.7 million tonnes. 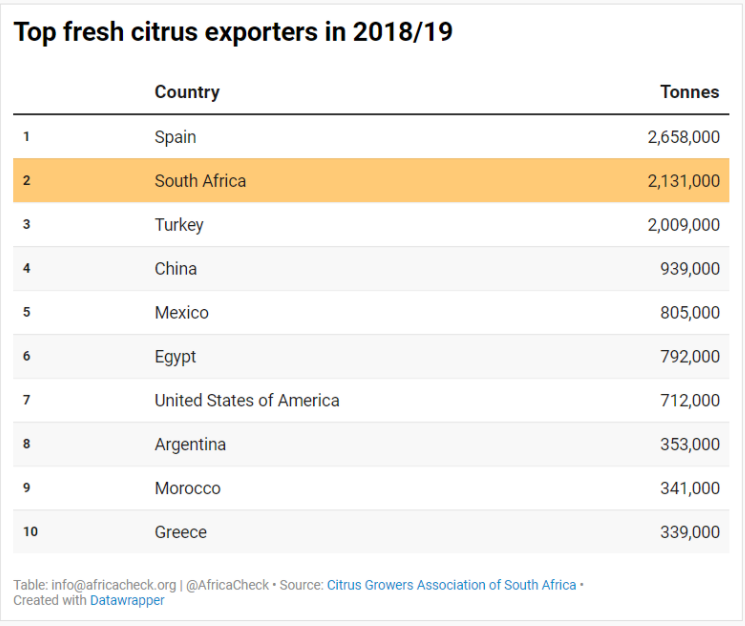 South Africa was also the second-largest exporter of fresh citrus during the 2017/18 season, exporting 1.9 million tonnes.

However, as data for 2020 is not yet available, we have rated the claim unproven.

“To date government has redistributed over 5 million hectares of land …”

The department of agriculture, rural development and land reform is responsible for overseeing land redistribution, which aims to change the distribution of South Africa’s land ownership.

The most recent publicly available figures from the department show that 4,847,596 hectares of land were redistributed between 1994 and March 2018.

Nkanyiso Gumede is a researcher at the Institute for Poverty, Land, and Agrarian Studies at the University of the Western Cape. He told Africa Check that, despite the lack of recent statistics, the president’s claim sounded plausible.

“It is possible that we are now at over 5 million because annual redistribution averages around 100,000 hectares,” he said.

But given the absence of publicly available data supporting this claim, we rate it unproven.

(Note: We requested more recent data from the department of agriculture, rural development and land reform and will update this report if we receive it.)

2.7 million hectares has been transferred through the land restitution process.

Land restitution aims to provide redress to people who were previously dispossessed of their land on the basis of their race through legislation such as the 1913 Natives Land Act.

A report from the department of agriculture, rural development and land reform states that 3,483,269 hectares of land was restituted between 1995 and 2018.

This equates to a total of 3,713,847 hectares of land that has been restituted since 1995. This is significantly higher than the figure of 2.7 million that the president cited in his address.

Nine claims about the state of South Africa