2.2 million people in Zimbabwe will need food aid in the coming months

Food problem is real, but numbers are exaggerated

World Food Programme
This article is more than 8 years old

A spate of newspaper headlines predicts a looming food crisis in Zimbabwe. This follows a press release from the World Food Programme earlier this month warning that 2.2 million Zimbabweans will be in need of food aid early next year.

Zimbabwe’s Commercial Farmers Union calls it a ‘man-made crisis’, says the numbers may under-estimate the problem, and describes the situation as the direct result of the ‘chaotic’ land reform and a decade of inappropriate policies.

Where does the 2.2 million figure come from? Does it under-estimate the problem? Is it right? Food imports for more than 2 million are way beyond the means of the finance ministry.

Where the number comes from

The figure of 2.2 million originates from the Zimbabwe Vulnerability Assessment Committee (ZimVac) livelihood assessment draft report for 2013, buried on page 122.

Each year ZimVac, a coalition of NGOs, researchers and government agencies, undertakes a major rural livelihood assessment, based on a sample of over 10,000 households across the country.

The sample is drawn from the official statistics agency, ZIMSTAT, based on its ‘master sampling frame’, and the resulting data is aimed to be representative of the country as a whole.

How it is calculated 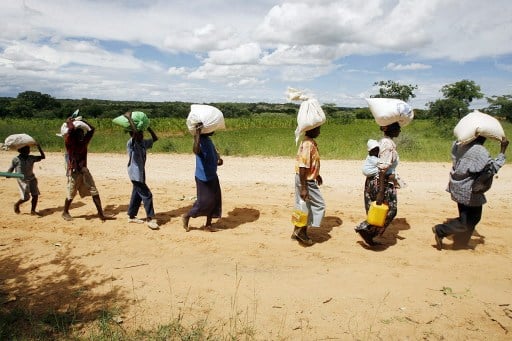 The process for deciding the headline figure is complex. It involves assessing for each household all the cereal production, and then adding in income from employment, remittances, livestock sales, and other sources of income that could be used to buy food.[i] Assumptions on prices and market availability are used to translate income into food and in turn energy.[ii]

The food security assessment is based on the household’s potential access to enough food from all sources, including purchases, to give each member a minimum of 2100 kilocalories per day in the period 1 April 2013 to 31 March 2014.[iii] The total number in food deficit figure is then calculated as a sum of all of those experiencing any negative balance in the accounting period.

It’s a complicated procedure with lots of steps and plenty of assumptions. What the headline figure doesn’t indicate – although the report does, and the background documents are quite transparent about this – is that the big number includes many people who may have a projected deficit for actually a very short period.

Indeed, at the time of the survey in May 2013, over 80% of households surveyed had no hunger problems, with only a very small proportion recording ‘severe hunger’.[iv]

The report shows that there is a progression of food insecurity, with a peak of 2.2m people expected in January to March 2014.[v] 31% of the total (683,000 people) move into food deficit only in this crunch period before the next harvest. Some of these, it suggests, may in fact be food insecure for only a very few days.

The 2.2 million figure is of course a good flag-waving number for the WFP to raise funds, and for the CFU to bash the government for the land reform (and even President Mugabe is now joining the critique of the ‘new farmers’), but the actual implications are more complex.

Reasons to be cautious

Here are five reasons why we need to be cautious about the figures.

For all these reasons and more, those working on the very real problems need to be cautious about the headline statistics and understand in more detail what happens to whom and where.

A further concern with recent national surveys is that they have been sampling according to old sample frames set before the land reform. For this survey ZimVac used an updated sample so it should be more reliable than past surveys but there is still much that is not captured.

Conclusion – The food problem is real but claim that 2.2 million will be in need exaggerates the problem

From all the evidence available it is clear there is going to be a problem of food deficits in the coming months. However problems are going to be concentrated in a certain time period and, outside a few areas and for more vulnerable people, it’s not going to be as bad as the headline figure and the media commentary suggests.

Imports will certainly be needed, and targeted food aid will be important, but other coping strategies will also come into play.

Ian Scoones is a professorial fellow at the Institute of Development Studies. He is a co-author of Zimbabwe's Land Reform: Myths and Realities (Jacana, 2010). This is an edited version of an article that first appeared on: http://zimbabweland.wordpress.com/

2.2 million people in Zimbabwe will need food aid in the coming months

Food problem is real, but numbers are exaggerated