Claim that 94% in SA have access to safe drinking water...doesn't hold water

Do more than 94% of South Africans really have access to safe drinking water? The question arose after a recent Africa Check report in which we quoted a statement by Water and Environmental Affairs Minister Edna Molewa claiming that 94.7% of the population had “access to clean and safe drinking water”.

A reader wrote to us querying the accuracy of the figure and argued that by referring to official statistics like this, “journalists minimize the extent of the [water] problem” in rural and poor municipalities.

So is the claim true or not? Certainly Edna Molewa is not the only one to have made such a statement about water provision in South Africa.

In June 2011, her predecessor, Bulelwa Sonjica, told the National Council of Provinces that “when the government took office in 1994, a mere 62% of households had access to clean drinking water. Today that figure stands at an average of 93%”.

A report published by the South African government’s BuaNews agency in August 2011 referred to 92.9% of South Africans having “access to a safe water supply”.

And on Saturday, during Freedom Day celebrations, President Jacob Zuma remarked that the "percentage of households with access to potable water has increased from 60 per cent to over 90 per cent" since 1994. 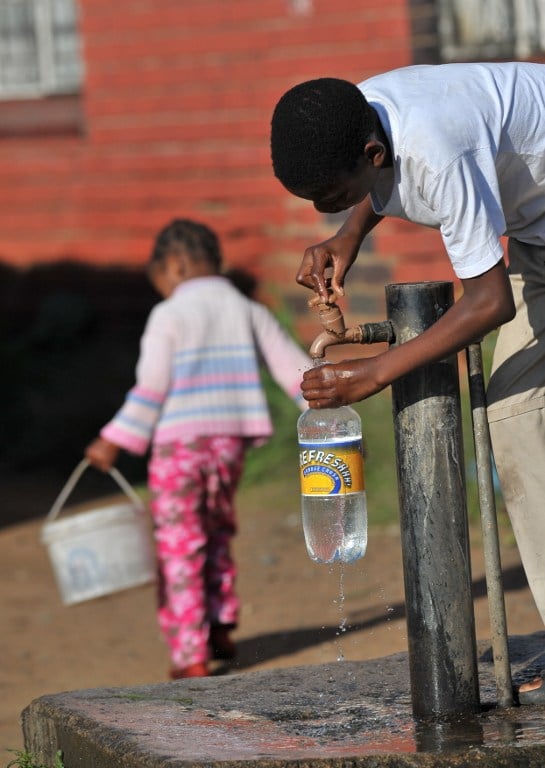 Mava Scott, head of communications for the department of water affairs, told Africa Check that the department’s figures show that 96.4% of households currently have “access to piped water”. The issue of water quality is a “separate issue”, he said.

More detailed figures are contained in a 2011 general household survey published by Statistics South Africa (StatsSA), the government statistical service. And that report stated that 89.5% of South African households had access to piped water. Breaking that number down, 43.3% had piped water in their homes, 28.6% had access to water in their yards, 2.7% had the use of a neighbour’s tap and 14.9% had to make use of communal taps.

This suggests the number of those with access to "piped water" is lower than that claimed.

However, according to Oliver Ive, a water and sanitation engineer and MD of Amanz’ abantu Services, a private company involved in rural water supply and sanitation projects, “the fact that someone has a tap doesn’t mean they have clean water or access to piped water”.

“If you put a pump or a service in a village, is it still working in five years time? Government will say that they have spent the money on infrastructure and the people have access, but if you go out and physically check if those taps are delivering water, and quality water, the answer is probably no.

And what about water quality?

“The reality,” says Oliver Ive, “is that everyone in South Africa has access to water because they are alive. Without water you die. The real question is, do they have access to water that is going to be good for health?”

It is a far more difficult question to answer.

One of the primary benchmarks of water quality in South Africa is the annual Blue Drop Report released by the department of water affairs. It focuses not only on water quality but also on operational aspects of water service providers including their risk and asset management and water safety plans.

As a pure barometer of water quality, the report is problematic. The department is careful to emphasise that “a town without Blue Drop certification does not automatically mean that its water is unsafe for human consumption”.

Releasing the most recent Blue Drop report in 2012, Molewa said: “The certificate is awarded as an acknowledgement of Excellent Drinking Water Quality management which surpasses the requirements of national norms and standards by a significant margin. In fact there are a number of water systems in many towns where the water complies well with set standards but there are certain shortcomings identified with the overall risk management aspect.” 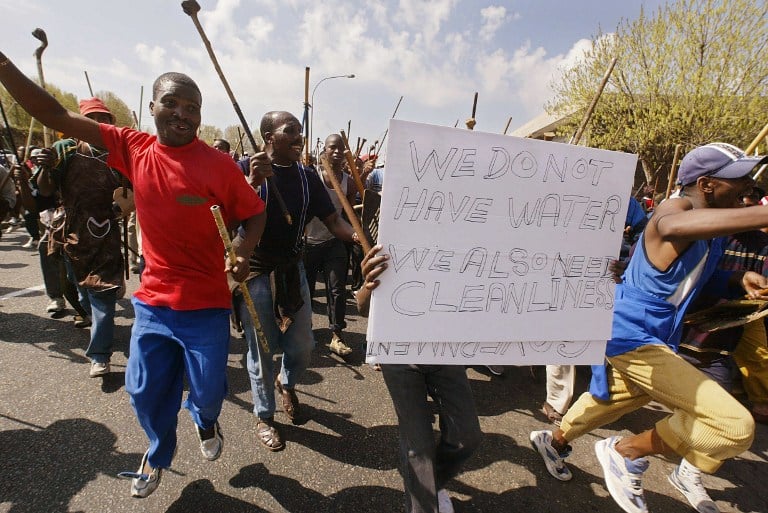 There is another problem. Blue Drop assessments in 2012 were limited to 153 municipalities designated as water services authorities.

Hundreds of smaller rural water supply schemes, where many people still obtain water pumped  from boreholes and springs, slip through the cracks.

So while the programme has deservedly attracted wide praise as the most effective regulatory mechanism implemented by the department of water affairs to date, it does present a skewed portrait of water quality in South Africa.

According to the 2012 report, as Molewa noted in her speech, “The overall national drinking water compliance figure is recorded at 98.3% (based upon microbiological, chemical, physical and organoleptic data).”

The Eastern Cape, for instance, obtained an 82.10% Blue Drop compliance score although the province has been dogged for years by reports of unsafe water systems, poor management and poor access to piped water in rural areas.

The reason is simple. “They are getting an artificially high reading because some of the less compliant municipalities and metropolitan areas are not reporting their figures,” says Dr Anthony Turton, a prominent water resource management specialist and professor at the University of the Free State’s Centre for Environmental Management.

There are no penalties if a scheme is not submitted for evaluation. Perversely, if a district water supply authority wanted to improve its Blue Drop score, it could simply leave poorly scoring rural water supply schemes out of its final reporting. 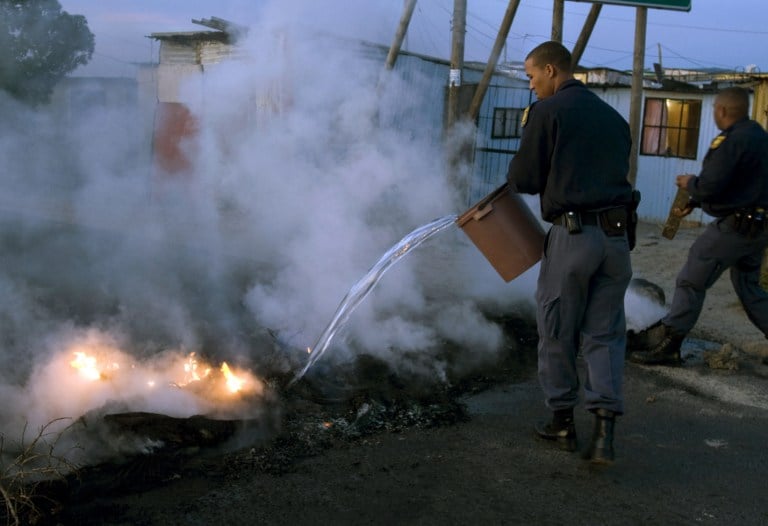 Faced by mounting service delivery protests around South Africa, one of the victories that government can claim, says Turton, is that they “have in fact improved water supply”. Which means that water supply and quality is a “highly politicised” issue.

“So wherever you get information from (on water quality and supply) it is likely to be biased by the political process.”

There are also concerns about the accuracy of municipal data.

Jay Bhagwan, water use and waste management executive manager at South Africa’s Water Research Commission (WRC), was recently quoted saying that 18% of South Africa’s municipalities had poor record-keeping, 30% have “worthless records” and 13% have “no records”.

A report published late last year by the WRC on water loss in South Africa found that only 19% of 132 municipalities sampled in its research “could supply complete, plausible and comprehensible data”.

“A large portion of the data supplied was erratic and completely unreliable which reflects poorly on the state of record keeping in a significant number of municipalities in the country.” 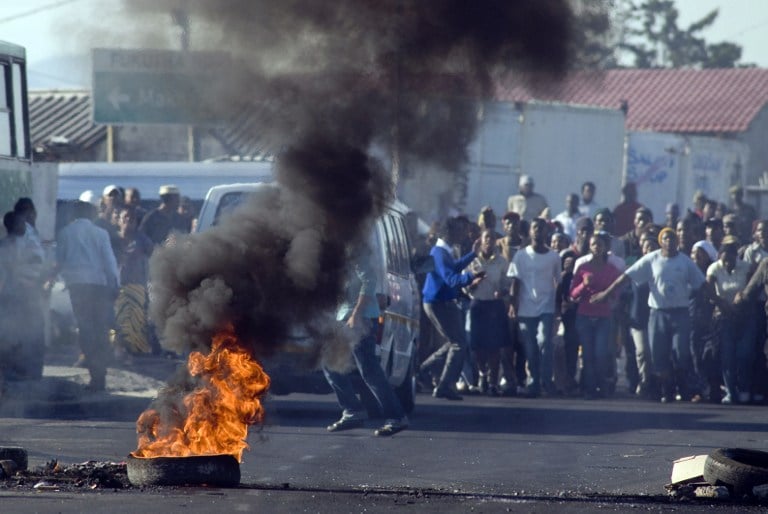 And although Blue Drop scores have been increasing steadily since 2009, consumer satisfaction with the quality of water services has been declining since 2005.

According to the 2011 Stats SA general household survey, only 62.1% of those surveyed rated the quality of water-related services as “good” compared to 76.3% in 2005.

Another aspect that has an impact on water supply and quality is the state of existing infrastructure.

According to the WRC study, 36.8% of South Africa’s municipal water is lost before it reaches customers - most of it as the result of leaks and deteriorating water supply systems. As a result, government loses R7-billion in revenue and South Africa, regarded as a “water-stressed” country, loses 1,580-million cubic litres of water each year.

The WRC report warns: “With increasing water scarcity, significant service delivery backlogs and poor revenue recovery, the losses are negatively impacting on the ability of the municipalities to provide sustainable and efficient services...The maintenance backlogs and the deteriorating infrastructure within municipalities is a matter that must be addressed urgently if the water losses and poor service delivery are to be addressed adequately.”

Clearly, as shown by the official statistics agency's data and other numbers, Molewa’s claim that 94.7% of the population had “access to clean and safe drinking water” does not hold true. The department of water affairs, in referring to a similar figure, says its statistics refer only to “access to piped water” and that water quality is a “separate issue”.

The 2011 Census has also been the subject of some controversy. And the Blue Drop audits, while commendable, cannot be relied upon for an accurate assessment of national water quality as they  do not include many rural water schemes. Perhaps the picture that is closer to reality is that from the 2011 Stats SA general household survey, which recorded that only 62.1% of those surveyed rated the quality of water-related services as “good”. This compared to 76.3% in 2005.

Statistics should never simply be accepted as fact. All too often in speeches, reports, newspapers and magazines, they are quoted  with authority. Numbers are equated with hard facts. But, in truth, statistics usually only tell part of the story.  And that story may not be an accurate reflection of reality.