A mystery “wonder herb” that has never been subjected to independent clinical trials or reputable studies is being touted unquestioningly by a number of leading Malawian newspapers and websites as a “cure” for HIV and Aids.

Named Garani-MW1 by the Malawi health department bureaucrat who says she discovered it,  the “HIV and Aids herb” is described on the official product website as “a herbal preparation that is being used to treat people that have HIV and Aids”. The website claims, without offering any supporting proof, that the product  has “strong antiviral properties and therefore also positively affects immune system” (sic).

Now, according to a recent report in the Nyasa Times, a Zambian company has “expressed interest in the working wonders of the herbal concoction” and has dispatched a team of “experts”  to hammer out a “trade exchange deal” .


Like many similar “cures”, the herb is presented as a veritable panacea with patients supposedly having “reported success stories on diseases and conditions such as diabetes, high blood pressure, asthma, stomach ulcers, sickle cell, and other abdominal swellings in the body, amenorrhea and others”.


'The only herb I've handled' 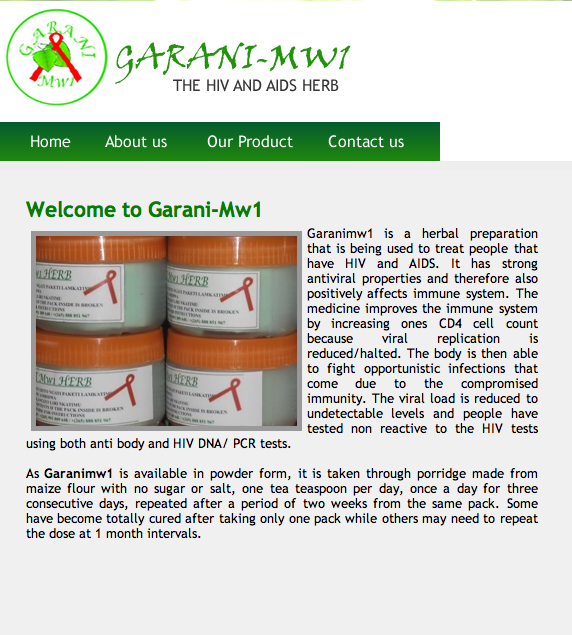 The woman who reportedly “shook the nation” with the claim that Garani-MW1 cures HIV is Gloria Kantema Jeremiah. She is said to be a Malawi Ministry of Health employee who “co-ordinates HIV and Aids activities” at a district office in the country’s capital, Lilongwe and says that she is studying towards a “Master of Public Health degree...specialising in epidemiology”.

In a lengthy interview with the The Nation newspaper, Jeremiah admitted that she “never had any special interest in herbs” and that “this is the only herb I have handled”.  “[W]hen I see a person showing signs of this disease, I get moved and am compelled to tell them about the herb,” she told the reporter. “If they believe my story, I give them the herb.”

Jeremiah has steadfastly refused to divulge the name or source of the mysterious herb. According to a report in Malawi Today, Jeremiah has “insisted on patenting the drug first” before revealing its origins. That report also quotes a “retired senior government official” who claims to have been cured by using the herb and a “foreign doctor who is in the country to help with the patenting process”. Oddly neither of them are identified.


'Told about the medicine in a dream' 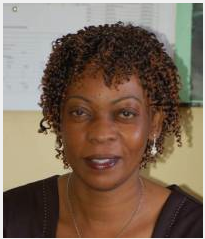 Jeremiah told The Nation that she had first heard about the herb from an “HIV-positive patient” who had been “told about the medicine in a dream”. The “patient”, whose story Jeremiah recounts on her website, is not identified and there is no evidence that he exists or that his case has been independently assessed.

This week, the Malawi Ministry of Health officially distanced itself from claims that Garani-MW1 is a “cure” for HIV and Aids.

“The Ministry of Health...does not recognise Garani as a cure for HIV and AIDS,” spokesman Henry Chimbali told Africa Check.  “Besides, the Ministry does not certify the efficacy of [such] a drug; internationally, the World Health Organisation (WHO) has such role. We also have pharmacy and medicines board that monitors the efficacy of any drug,” Chimbali in an interview.

“[C]urrent science still says there is no cure for Aids. At present, therefore, we know Aids is incurable but manageable through Anti-Retroviral Therapy.”

The makers of Garani-MW1 have yet to respond to questions emailed to the website.

Nathan Geffen, editor of  Quackdown -  a website that exposes nonsense health claims - says "misleading advertising can convince people to make decisions about their health-care that can cause them serious harm, or even death".

"The problem with quack remedies for AIDS are three-fold: Because we often don't know what's in them, we do not know if they are safe and if they interact with other medicines. Secondly,  they are often sold at high prices and people who cannot easily afford them, buy them out of desperation. Finally, the biggest problem is that people see these remedies as alternatives to scientifically proven medicines such as  antiretrovirals, that really do suppress HIV replication."


Conclusion: The claim is irresponsible quackery


There is no evidence that Garani-MW1 is a cure for anything, let alone HIV and Aids. The substance has not been subject to any independent clinical trials, no data has been published and none of the claimed “success stories” appear to have been independently documented.

The fact remains that there is no cure for HIV or Aids. Anti-retrovirals are the only reliable means of managing the virus that we know of. If a cure is ever discovered, you can be certain that international pharmaceutical giants will be falling over one other in their eagerness to license it and the story will be the subject of an international media frenzy, the likes of which we have rarely seen before.

Like so many other quack cures, the story of Garani-MW1 preys on the desperation of people diagnosed with HIV and Aids.

The fact that supposedly reputable newspapers in Malawi have chosen to give the claims credence with sycophantic and sensationalist reporting is particularly appalling. It is the kind of reporting that causes real damage and costs lives. It should be condemned.