Earlier this month Western Cape Premier Helen Zille tweeted: “No one has to use a bucket system in Cape Town.  Everyone offered an alternative.”

Two days later Paul Boughey, Chief of Staff to the Mayor of Cape Town, added: “CT only has 600 bucket toilets in circulation. We are eradicating them. NO one has to use them, but we can't force take up of dignified alt.”

The provision of sanitation to informal settlements in Cape Town has long been a contentious issue for the City and the Democratic Alliance in particular – dating back to the 2009 construction of 51 unenclosed toilets in Makhaza in Khayelitsha.

In the past few weeks, protests have focused on the remnants of the city’s crude bucket toilet system – which the City is attempting to phase out by replacing the buckets with Portable Flush Toilets (PFTs).

Zille and Boughey’s comments make two slightly different claims regarding the use or prevalence of bucket toilets in Cape Town.

On May 13, Executive Mayor of Cape Town Patricia de Lille stated there were currently “958 bucket toilets known and serviced by the City” [down from the 1 108 bucket toilets counted in June 2012].

On June 6 Solly Malatsi, De Lille’s Spokesperson, told Africa Check there were now “[a]pproximately 600” bucket toilets serviced by the city – perhaps a sign of the stepped-up bucket eradication plan. It was not made clear whether the remaining number of bucket toilets was due to residents’ refusal to accept the PFTs, or simply due to logistics.

The June figure would appear to agree with Boughey’s claim – however community-based safety and security NGO the Social Justice Coalition (SJC) has disputed this assertion, with the SJC’s Gavin Silber telling Africa Check that the cited figures only refer to the number of bucket toilets the city maintains. Although there is a “lack of accurate data”, Silber says there are “tens of thousands of people [who are not serviced by the City], who make use of their own bucket, which they buy at Shoprite, and who pour [their waste] into a river or down a drain,” or who relieve themselves in “empty clearings or buckets because they don't have access to a toilet or the one they do have access to is unhygienic or non-functional.”

The City’s own Water Services Development Plan concedes 40.1% of households in informal settlements are not serviced (or under-serviced – see below for the “service gap”), representing 77,783 households. Given this information, and for reasons explained below, it is clearly likely that the total number of bucket toilets in use in Cape Town significantly exceeds 600.

Is 'everyone' offered an alternative? 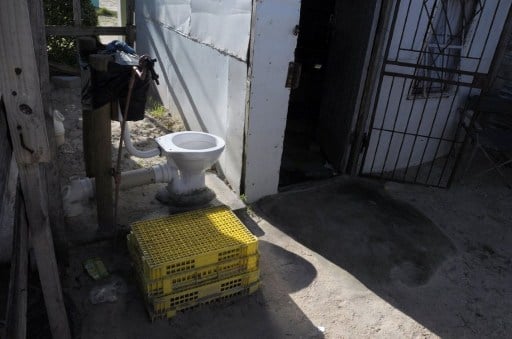 The mayor’s spokesman, Malatsi, told Africa Check the “backlog” of 77,783 households does not indicate completely unserviced households, rather that they are “serviced at a ratio higher than 1:5” – referring to one toilet to five households, the City’s minimum basic sanitation objective. The City aims to “provide minimum basic sanitation (to City Standards - 1:5) to 80% of Informal Settlement Households” by 2016/17.

The current backlog or toilet “gap” – to meet the needs in informal settlements in Cape Town – has been identified as 24,650 toilets.

Of course, even if the full 25,000 portable flush toilets are provided, these will only account for 25,000 households (as only one such toilet is used per household), leaving more than 50,000 households still in need of access to “adequate” services.

The existence of a significant toilet “gap” would therefore strongly suggest that not everyone in Cape Town has an alternative to the bucket system – or, at least, not an alternative that is easily or hygienically accessible, if you live in an informal settlement.

Does this mean the DA is doing a bad job? 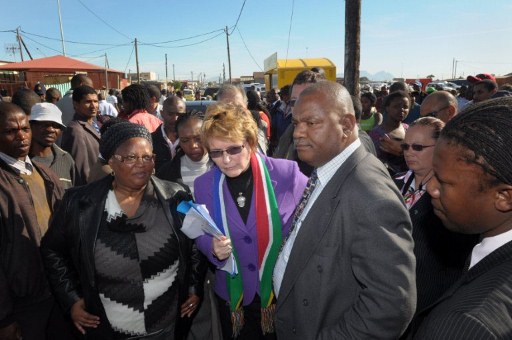 It’s relative. The Minister of Cooperative Governance and Traditional Affairs Richard Baloyi recently informed a national conference that 272,995 bucket toilet systems were still being operated by municipalities across South Africa.

Cape Town is far from being the only “offender” in this respect. The toilet: household ratio is also "pretty dire" in many other informal settlements in South Africa, with "many settlements having no access to formal sanitation whatsoever,” Kate Tissington of the Socio-Economic Rights Institute told Africa Check.

Further, the City’s assertions – that in many areas they are simply not able to install conventional sewerage connections (because of the underlying ground, for example) – is an honest claim.

Why the Big Stink?

There are a number of reasons Cape Town and the DA have come under fire for the bucket toilet and related issues:

1. The toilets that are provided are not always usable. The Social Justice Coalition recently released a social audit of toilets in informal settlements, which strongly indicated the City was failing to adequately monitor service provision to/for communal toilets (chemical toilets, etc) – this includes the removal of human waste, the cleaning of the toilets, the safety of the toilet structures, and the security of [people using] the toilets. The servicing of toilets not connected to the municipal sewerage system is performed by the municipality and outsourced sub-contractors, and the SJC report indicated these contractors were underperforming (and are insufficiently monitored). Boughey has rejected these claims, saying the SJC is “NOT authoritative” – but has not provided any of his own data to support this response. AfricaCheck repeatedly attempted to query the existence of any City service audits with Mayoral Spokesperson Malatsi, but the question was routinely ignored.

2. 1:5 is a minimum requirement, not a benchmark. The ratio of one toilet to five households is the absolute minimum specified in the Emergency Housing Programme, explains Kate Tissington, and should not be used as a guideline for [non-emergency] informal settlements. “It’s not supposed to apply to established settlements,” Kate says, “but there isn’t much else to guide municipalities.”

3. PFTs are a big issue. There are benefits to the PFTs – the most important, perhaps, being the safety or security of the user, who will no longer have to travel for 10-minutes or more in darkness in order to find a working toilet.

However without adequate servicing, the PFTs function as little more than fancy bucket toilets. Zille and City officials have spent a great deal of time in the press and on Twitter, explaining the hygiene and odour benefits of the PFTs. [ANC] City councillor Loyiso Nkohla, however, says the PFTs are perceived as an insult – and that their rollout has been conducted without any proper prior consultation with the communities affected.

In an interview with AfricaCheck, Nkohla challenged the Premier to use and live with one of the PFTs – in a room in her own house – for a week, and see what the experience was like. He added that many people, including media, had mistaken the Portable Flush description for a flushing toilet connected to a sewerage system – and wanted to clarify that it was a hand-worked toilet, and which required the addition of several litres of water (each time) to flush waste into the attached container [which, later, had to be emptied and disposed of].

Responding to newspaper headlines stating her entourage had been pelted with faeces sourced from bucket toilets, @helenzille corrected the statement and said that “Loyiso Nkohla of the ANCYL transported it in his Audi. That shows that the portable flush tanks are clean and odourless.”

Nkohla confirmed to AfricaCheck that a) he had transported the faeces in his Audi and that b) it was transported in PFTs. He did, however, dispute the “clean and odourless” claim, saying that even though he had wrapped the [five or more] PFTs in black plastic bin-liner bags, the containers leaked and he had to take his car to a carwash following the protest.

The assertion that only 600 bucket toilets remain in Cape Town applies only to government-serviced toilets and fails to take account of the thousands of households not serviced.

While the City of Cape Town may not be the worst-performing municipality in South Africa in terms of providing of sanitation, by its own figures more than 112,000 people in the municipal area do not have access to sanitation.

The war of words (and poo) have turned a community’s fight for a basic human right into political grandstanding on all sides.

For the City and the DA to treat protestors as somehow being “ungrateful” is equally disingenuous and obscures the municipality’s very real service delivery progress in this and many other areas.