Claim that you don't need pills to treat depression is misleading

IOL news website
This article is more than 9 years old

Researchers have found that regular meditation for half an hour a day can offer as much relief for people with depression as “popping a pill”, South Africa’s IOL news website reported last week.

The headline was emphatic: “Depressed? You don’t need pills.” The article underneath - a shortened version of a far more detailed piece published by the UK’s Daily Mail tabloid - reported on recent research into the role of meditation in managing stress and maintaining overall wellbeing.

A version of the article also appeared in South Africa’s Saturday Star and in its sister paper, the Independent on Saturday, on health pages crammed with a dozen other health reports, all originating from the Daily Mail.

“Meditation appeared to provide as much relief from some anxiety and depression symptoms as other studies found from anti-depressants,” Dr Madhav Goyal, an assistant professor of medicine at Johns Hopkins University in the US and the lead researcher in the study was quoted saying.

So, should people being treated for depression abandon existing treatments, throw away their pills and assume a lotus position? We looked at some of the fine print. 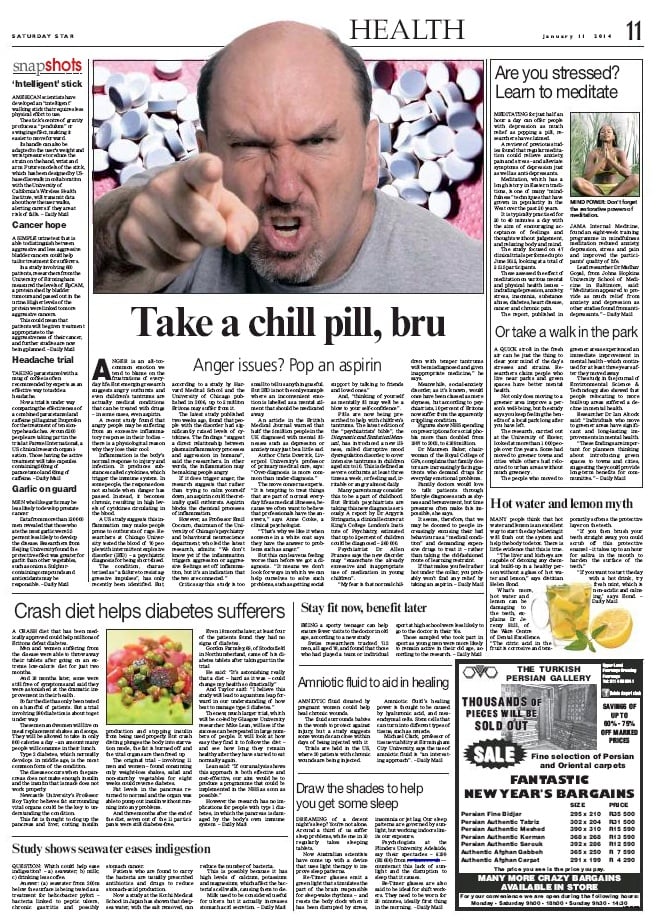 The exact causes for depression are not known, though explanations vary from the biological (differences in brain chemistry, hormonal anomalies or genetics) to the circumstantial (traumatic events or stress). What is known, is that depression ranges in severity, can be extremely debilitating, and is often further aggravated by stigma.

As a result, treatment is usually composed of a mixed bag of interventions, depending on the needs and circumstances of the individual and the intensity of their symptoms. Different kinds of psychotherapy have been shown to work better for some than others, with a great deal of evidence supporting cognitive behavioural therapy in particular. Though the effect of antidepressants alone can be small, there is proof that their impact in the overall management of depression can be significant.

The World Health Organisation recommends psychosocial support as a first line for mild depression, coupled with psychotherapy or medical treatment if required, and a combination of antidepressants and therapy for severe depression.

Meditation tends to mean different things to different people, largely because the practice has strong historical ties with religion. Although meditation is often considered a product of Eastern faith and lifestyle, most religions engage in some form of meditative practice.

This has posed a challenge for researchers seeking to define the concept of meditation in order to study it. In its broadest sense, meditation is an attempt to regulate the mind and direct thoughts in a conscious manner.

Scientists are still trying to figure out how this translates into tangible everyday results, though there appears to be some consensus that through improving the ability to regulate one’s attention and emotional state, meditation is actually making people happier — the theory being that a wandering mind can distract us from being content “in the moment”.

Despite research hinting at it, there is at present insufficient scientific evidence to support the use meditation in mainstream medicine. This is where the recent study findings come in.

A team of researchers at the Johns Hopkins University in Baltimore have painstakingly reviewed all of the evidence currently available for the effect of meditation on stress and wellbeing. Combing through 18,753 studies, they weeded out everything that did not conform to the scientific benchmark of randomised controlled trials. They were left with 47 trials with a total of 3,515 participants among them, that they could use to provide clinically valid data.

Their findings present the most scientifically sound evidence to date for the role of meditation in improving stress-related conditions. The researchers found that meditation programmes moderately improved levels of anxiety, depression and pain and marginally improved stress and overall mental well-being. They found insufficient evidence to show how meditation affected mood, attention, substance abuse, eating habits, sleep and weight.

No evidence that meditation is better than medication 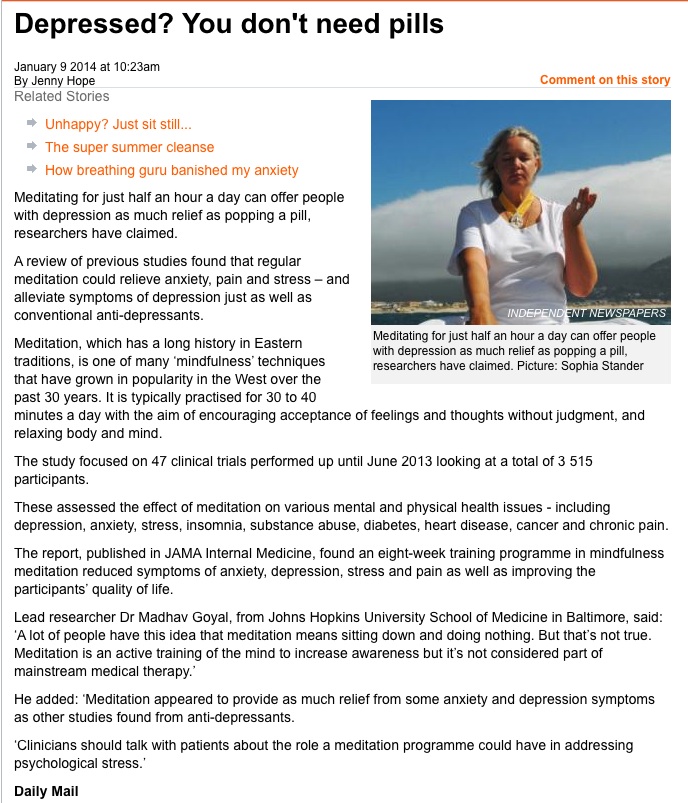 The findings were published in an academic journal earlier this month. But despite the researchers stating explicitly in their paper that they “found no evidence that meditation programmes were better than any active treatment” such as “drugs, exercise and other behavioural therapies”, this did not seem to translate equally well across all resulting media coverage.

“We are not saying eight weeks of mindfulness is better than antidepressants,” Dr Goyal - the lead researcher - told Africa Check this week.  “We are saying the effects of each are comparable for mild symptoms of depression, not clinical or major depression.”

The real merit of these most recent findings on meditation, according to the researchers, is that medical professionals now have enough evidence to include meditation in the package currently offered to people dealing with depression, anxiety and stress.

But pitting meditation against “pills” as the IOL article has done, would be an oversimplification of the issue.

“It will not be a case of medication or meditation”, Professor Crick Lund, director at the Alan J. Flisher Centre for Public Mental Health at the University of Cape Town, told Africa Check.

For more moderate cases, he said, meditation might help. But in others, patients will benefit greatly from medication. “One needs to proceed on a case-by-case basis, informed by a careful consideration of the complexity of each individual and the best available evidence.”

Depression is as complex and varied in its treatment as its diagnosis. Being able to add meditation to the proven available options for intervention presents a significant breakthrough in the provision of side-effect free, patient-managed options.

However, at no point did this new research suggest that people with depression should abandon their current treatment in favour of meditation, especially not in the case of more severe forms of depression and anxiety, which may necessitate medication. The article misconstrues this.

Reducing a regimen of proven and targeted antidepressant treatment to “popping a pill” runs the risk of trivialising depression and compounding existing stigma, all for the sake of a snappy headline.