Coca-Cola is right: 50% of young women in northern Nigeria have no formal education

On International Women’s Day Coca-Cola Nigeria tweeted a video claiming 50% of young women in northern Nigeria have no formal education.

50% of young women in northern Nigeria have no formal education

​​​​​​To mark International Women’s Day in March 2019, Coca-Cola Nigeria tweeted a video that opened with the claim that “50% of young women in northern Nigeria have no formal education”.

The video is part of a campaign by the multinational beverages company to help small businesses run by women.

But are half of young women in the north of Nigeria, Africa’s most populous country, without formal education?

Coca-Cola Nigeria is yet to respond to our request for more information about this claim, including how it defined “formal education” or what age range “young women” fell into.

The video attributed the claim to the Education Policy and Data Center, a research arm of US-based international non-profit organisation FHI 360,  which is focused on “healthcare, education and economic participation”.

In an undated article, Schooling in northern Nigeria: Challenges for girls' education, the centre’s researchers state that “in many northern states more than 50% of young women ages 15-24 have no experience with formal education”. (Note: The centre has not responded to us but using this approach we established the article was first published in 2014.)

The centre calculated this number using data from the 2011 Nigeria Multiple Indicator Cluster Survey (MICS 2011). This is an internationally comparable survey developed by UN agency Unicef to track the progress of women and children.

What did the data show?

The 2011 survey put the literacy rate among women aged 15 to 24 in Nigeria’s three northern geopolitical zones at 32% in North West, 37% in North East and 65% in North Central.

This averages to a literacy rate of 44.7% among young women aged 15 to 24 in northern Nigeria.

The most recent Multiple Indicator Cluster Survey is the 2016/17 edition, published in October 2017. Here the average literacy rate of women aged 15 to 24 in the three northern geopolitical zones worked out to 47.3%.

What does it mean ‘to have’ formal education?

We asked Prof Tijjani Abubakar, the dean of the faculty of education at the Ahmadu Bello University in Zaria, Nigeria, what qualified as formal education.

“Anyone who has not attended primary school, secondary school, university, polytechnic or college of education does not have formal education,” Abubakar said.

“Even if you didn't finish primary school, you can still be said to have formal education.”

Segun Adedeji, a professor of education management at the University of Ibadan agreed, noting that anyone who has had the experience of being enrolled, attending and being taught in a school has formal education.

“You do not have to pass an examination or receive a certificate before you can be referred to as one who has formal education,” he said.

Educational attainment was not measured in the 2011 and 2016/17 MICS, Dr Olarwaju from the National Bureau of Statistics  told Africa Check.

But the Demographic and Health Survey 2013 has data on the educational level  reached by women. Oriyomi Ogunwale, who is project lead at education-focused organisation Eduplana, told Africa Check this.

This survey found that 30.5% of women aged 15 to 24 did not have formal education, while a further 12.4% had only attended or completed primary school.

But the 2013 survey  did not break this down by geographical region, Erica Nybro, the senior advisor for communication at the Demographic and Health Surveys Program told Africa Check. (Note: The survey did find that 55.13% of women aged 15-49 in the north have no formal education. In the south this was only 6.23%.)

The Nigeria Demographic and Health Survey 2018 preliminary report was released in May 2019. But this does not contain data on educational attainment. The full dataset from this will be available by September 2019, Nybro said.

Why is the north struggling to educate its women?

We asked Oluwatobi Williams, a data scientist at information consultancy Resagratia, to help analyse the DHS 2013 data. It showed 48.3% of women aged 15 to 24 in northern Nigeria did not have formal education - similar to Coca-Cola Nigeria’s claim. (Note: Actual data can be found here.) 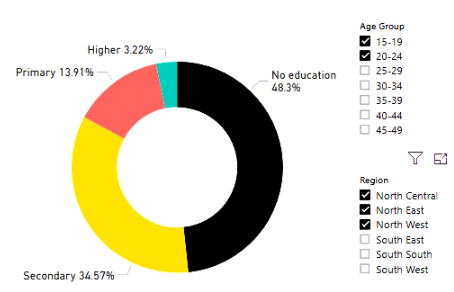 The reasons for this include “religious and cultural beliefs, insecurity and poverty”.

On International Women’s Day, Coca Cola Nigeria tweeted a video that claimed that 50% of young women in northern Nigeria have no formal education.

Two reliable data sources - the Multiple Indicator Cluster Survey and the Demographic and Health Survey - show that this is accurate.

Religious and cultural beliefs, insecurity and poverty contribute to lower access to education in northern Nigeria than in the south,  Segun Adedeji, an education professor at the University of Ibadan said.

50% of young women in northern Nigeria have no formal education