Did gun control cause fall in gun crime? The data backs the claim

On Friday, 30 November 2012, the Supreme Court of Appeal dismissed an order brought by a group of gun owners that would have compelled the minister of police to pay compensation for all firearms voluntarily surrendered for destruction under the Firearms Control Act 2000.

In a statement issued after the hearing, police ministry spokesman Zweli Mnisi welcomed the court’s ruling and explained why the ministry considers the Act so important.


The ruling “vindicates the approach of the police ministry to firearms controls,” the spokesman said.

“Tougher controls on the ownership, possession and use of firearms have seen a marked reduction in the incidence of gun-related crime in recent years,” he added.

“Gun control is accordingly at the heart of the ministry’s strategy to combat violent crime,” he continued.

Gun control is, of course, controversial. Following the ministry’s statement, a representative of South African gun clubs, who support the use of guns in sport, contacted Africa Check to question the claim.
We spoke to the South African Gun Owners Association (SAGA).

The main argument made was about the evidence, or lack of it, that the new controls have had an effect since the data does not show what weapons were used in what crimes.

Specifically, the crime statistics made public by the police do not show whether the guns used in most-gun related crimes are legal or illegal under the new legislation.

Therefore, SAGA spokesman Martin Hood told Africa Check: “There is no way a linkage can be formed between the implementation of the Firearms Control Act and its relationship to any specific crime.”

What all sides do accept is that the police crime statistics do show a clear downward trend in gun-related crime since the Act came into effect.

However, as the gun owners point out, the statistics do not show sufficiently detailed data of gun and other crimes to be able to conclude, from this alone, that the gun control Act was responsible for this change .

Crime overall has fallen over the same period and, from the published statistics, it could appear that all that has happened with gun crime is that it has followed the broader pattern.


Cause of death data does back the police claim


This seems plausible. However, research forwarded to Africa Check after the first publication of this report on 15 December, does appear to confirm that gun crime has fallen more sharply than knife and other types of violent crime.

And since knife crime and other violent crimes are affected by many of the same other factors as gun crime and have not fallen to the same degree, the research does suggest that the Act has indeed, at least helped reduce gun crime.

The research, conducted by Dr Naeemah Abrahams and others at the Medical Research Council’s Gender and Health Research Unit, found that the use of guns as a cause of non-natural death of women almost halved between 1999 and 2009 (after the Act was drawn up and while it was introduced), while  deaths from other means including stabbing and blunt injuries barely changed. This is shown in the below graph. 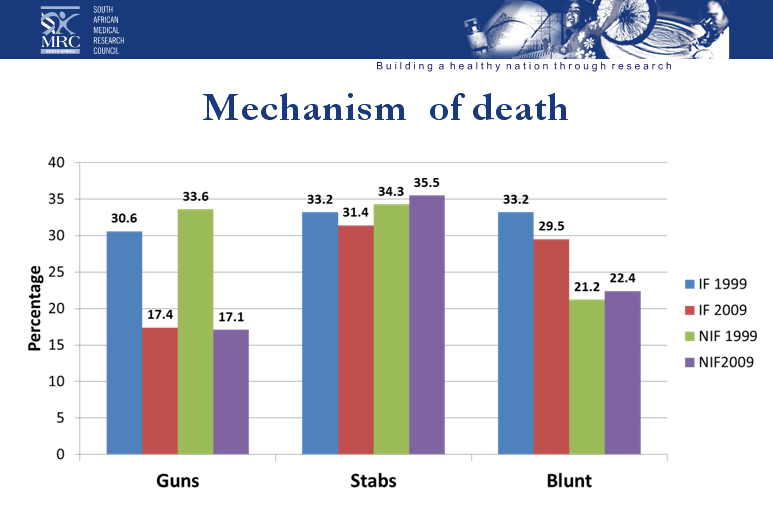 At the same time, a study of mortuary data shows that while 29 percent of non-natural deaths across South Africa were due to firearms in 2002, this dropped to 10.8 percent in 2008, while deaths from stab wounds and transport accidents remained broadly stable during this time.


'Indications' of the Act's effect


As Institute for Security Studies researcher, Lauren Tracey, told Africa Check the police data lacks the level of detail required to enable researchers to confirm the effect of the Act, and means that some degree of speculation is necessary.

Nevertheless, she said: “There is some indication that these developments have contributed to reductions in firearm loss and theft from private citizens, as well as in firearm homicide.”

“The fact that the firearms issue has been in the mainstream media and that South Africans are aware of the threat posed by illegal firearms may be the most important contributor to the reduction because it increases the probability of criminals being reported for possession of illegal firearms before crimes are committed,” she added.


As said in the initial version of this report, the absence of detail in the official crime statistics makes it difficult to draw firm conclusions about the impact of the Firearms Control Act on gun crime.

However, other research, including the research quoted here that is drawn from mortuary statistics and looking at changes in cause of death, does back the police claim that the gun control act has helped reduce gun crime.

If you know of further evidence that shows more information - either way - please get in touch and let us know.