Did Italy’s Renzi wear a bullet-proof vest (or something like it) to meet Kenya’s president?

Did Italian Prime Minister Matteo Renzi feel the need for an extra layer of security when he met with Kenyan President Uhuru Kenyatta at State House in Nairobi earlier this week?

A picture shared on Twitter by Kenya's The Star Newspaper and other website shows what appears to be the sort of bulge under Renzi’s jacket that normally suggests someone is wearing a bullet-proof vest. 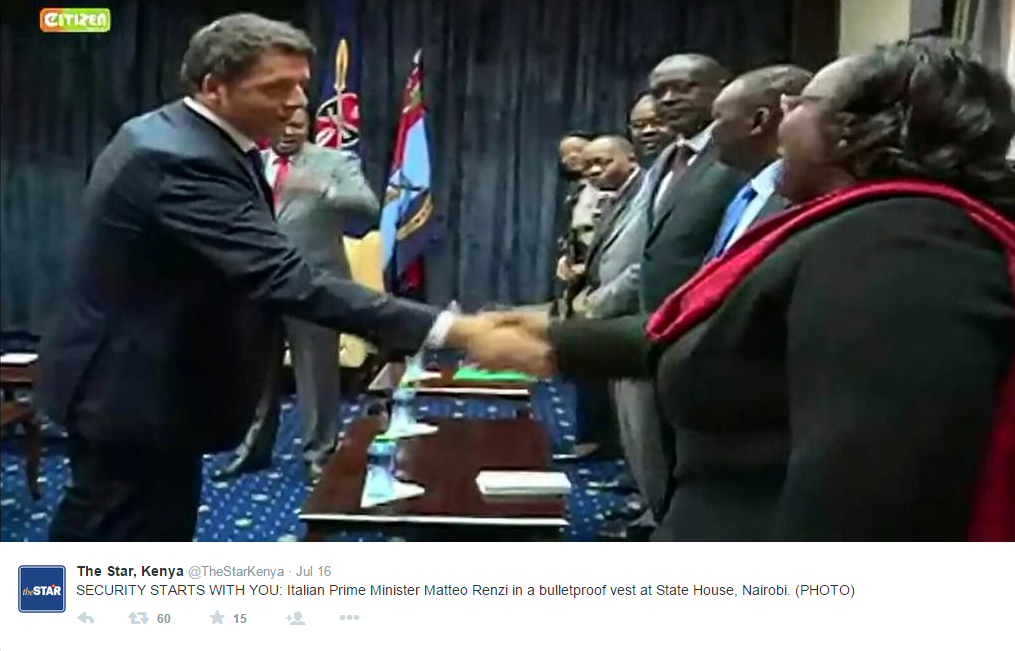 Speculation reported in both Italy and Kenya

Media in both Kenya and Italy speculated as to what Renzi was concealing.

The Nairobi News reported that: “A picture doing rounds on social media shows what looks like corner-shaped outfit underneath the PM’s slim fit Italian suit.” They added that Kenyatta was facing the “ultimate embarrassment following reports that the PM went to State House wearing a bullet-proof vest”.

The story was also carried on Italian websites Corriere della Sera, la Repubblica and Libero Quotidiano. The website ran a poll asking whether readers thought it was “racist gesture” for Renzi to have worn a bullet-proof vest when meeting the Kenyan leader. [By Monday morning 20 July, 72% of respondents had voted “sì” - yes.]

Image shows 'no trace of manipulation'

So is the picture authentic? Well it seems so.

Africa Check asked photo verification experts at the AFP news agency for help. They ran the image of Renzi through photo-checking software they use called Tungstène. After careful analysis they told Africa Check they could see “no trace of manipulation, no post-production” of the image, that appears to be a screengrab from a video, they said.

So what does Renzi’s office say?

Our colleagues at the Italian fact-checking website Pagella Politica contacted the Prime Minister’s office for comment on what could have caused his jacket to bulk up and have not yet got a reply. If or when they do come back to us, we will let you know.

Conclusion: Pic not manipulated but verdict still out

The picture circulating on social media, and reported on in Kenya and Italy, appears to show Italian Prime Minister Matteo Renzi wearing a bullet-proof vest when he meet Kenya President Uhuru Kenyatta.

Africa Check was able to establish that the image was not manipulated. Exactly what the Prime Minister had under his blazer is unknown. If it turns out that Renzi wasn’t wearing a bullet-proof vest he may want to have a word with his tailor.

GUIDE: How to spot fakes and hoaxes online