Does S. Africa rank 8th in the world by suicide rate?

Does South Africa have one of the highest suicide rates in the world? And do an average of 23 people take their lives each day?

The Mail & Guardian reported in July that “South Africa is ranked eighth internationally for its high suicide rate”. A headline on News24 made a similar claim: “SA has world's 8th highest suicide rate with 23 deaths a day.”

The claim has done the rounds before, having being published in 2014 by the Mail & Guardian, News24 and Drum.

How many people die each day from suicide in South Africa? And should this data be used to make international comparisons?

What is the source for the media reports? 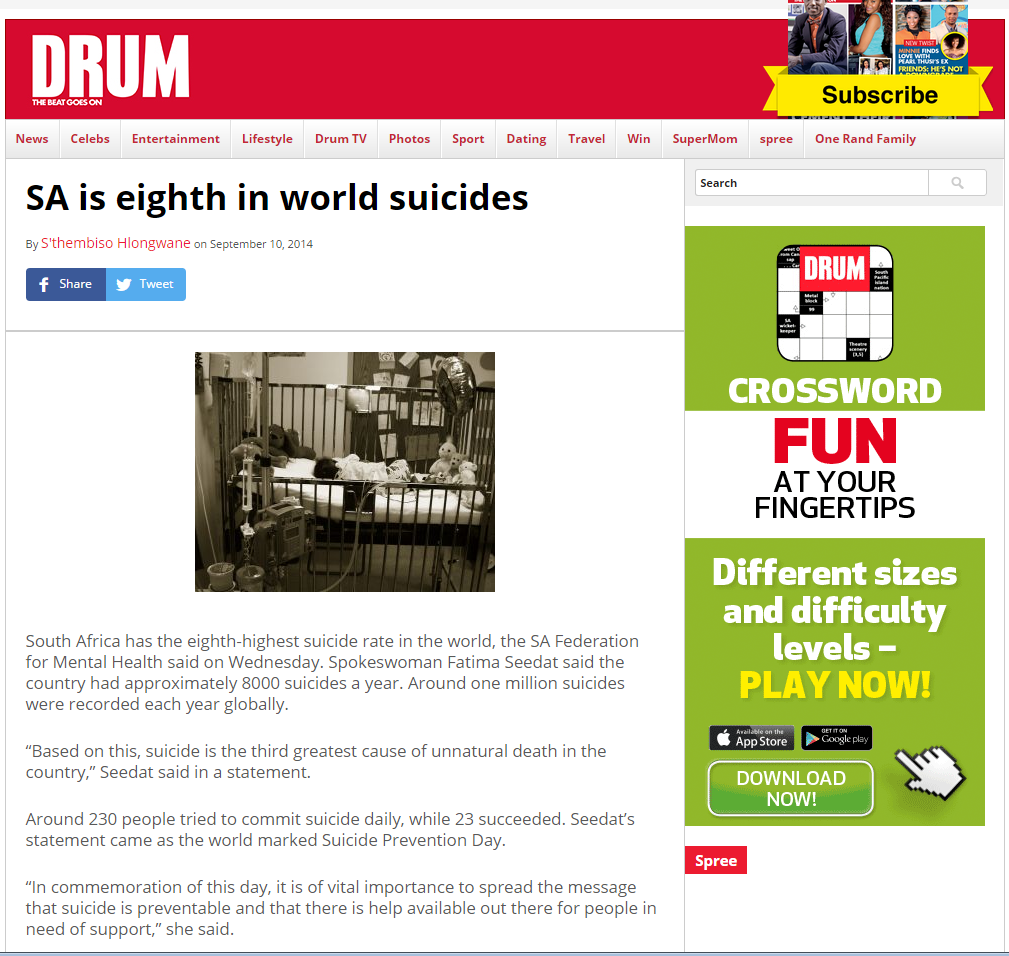 The Mail & Guardian article cited the South African Federation of Mental Health (SAFMH) as the source of its claim about the number of deaths and South Africa’s world position in terms of suicide rates.

Indeed, a 2014 press release on the federation’s website stated that “South Africa has the 8th highest rate of suicide in the world” and that there are 23 suicides committed every day.

But when Africa Check approached the federation for more information they were unable to provide sound research to support the claim. Instead, they referred us to a fact-sheet on suicide compiled by the University of Cape Town, which contained the claim but no reference to their source.

When asked for comment, the deputy director of the federation’s national office, Leon de Beer, distanced the organisation from the statistic.

“The press release in question was released by a former employee and the documents that this is based on seem to no longer be available. We then researched the statistic and came across the same information from UCT,” De Beer said, but added that he was not sure even now if the statistic is accurate.

How many suicides occur each year in SA? 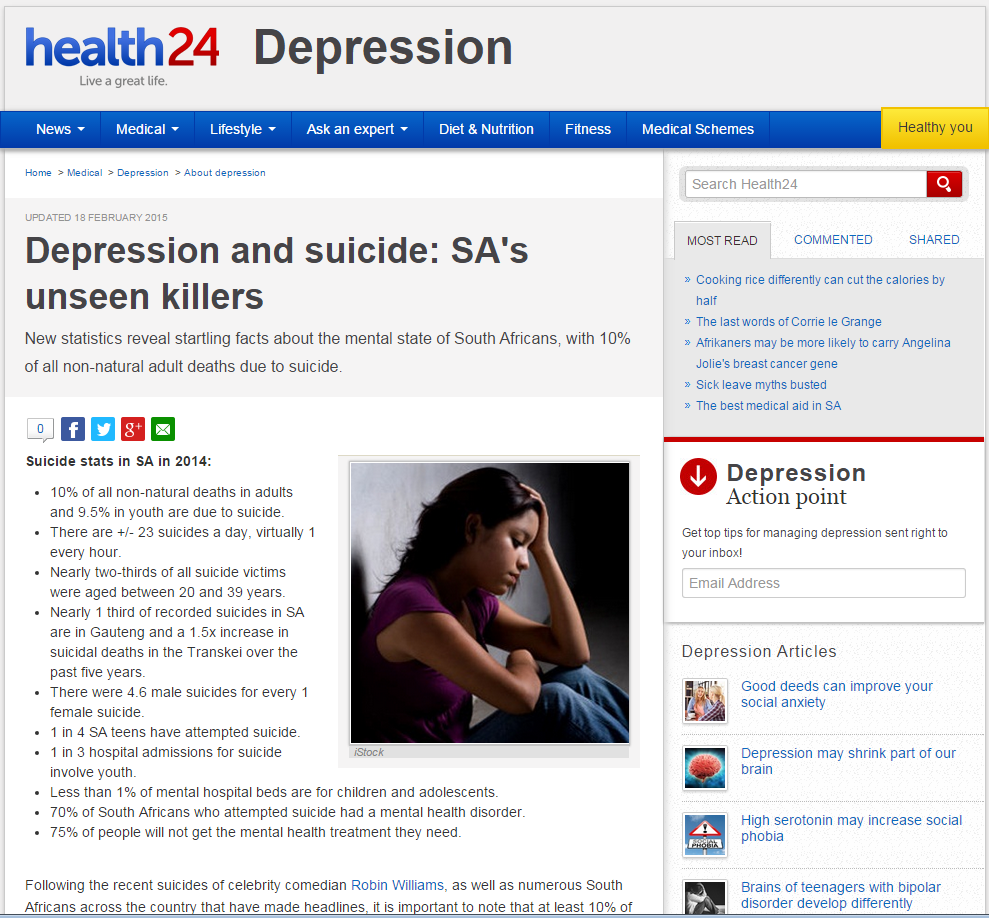 So is there research showing that 23 people die every day in South Africa from suicide? This would mean 8,395 deaths each year and a rate of 15 to 16 suicide deaths per 100,000 people.

According to the principal statistician for births and deaths at Statistics South Africa (Stats SA), Vusi Nzimakwe, “the number of deaths due to intentional self-harm during 1997 to 2013 fluctuated between 104 to 592 deaths per year.”

Their latest data, from 2013, showed there were an estimated 592 deaths by suicide that year - or one to two per day.

Using a different method of calculating suicide deaths, a 2009 study conducted by the Medical Research Council (MRC) produced a very different finding. While Stats SA data from 2009 recorded 379 suicides, the MRC study found that there were 6,471 suicides that year. This would translate to 18 suicides every day and a suicide rate of 13.4 per 100,000 people.

Why is the data so different? 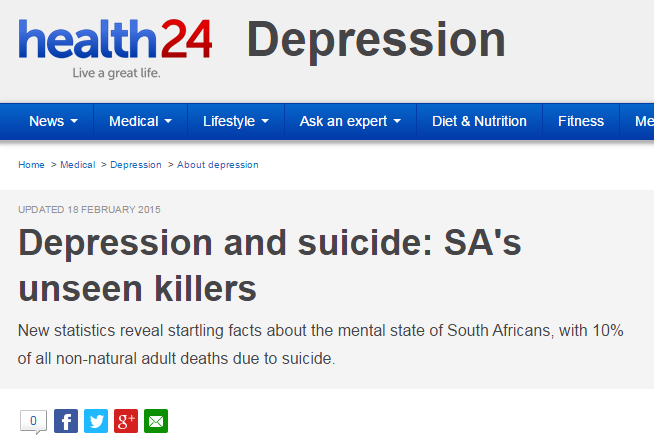 How can figures for the same year in the same country differ so much between sources? Looking at the methods used to collect data provides some answers.

Stats SA’s statistics are based on death certificates from the Department of Home Affairs. Their statistics are compiled in line with the World Health Organisation’s death classification codes.

On the other hand, the MRC gathered data from post-mortem reports to determine the number of suicide-related deaths. Their nationally representative study stated that post-mortem reports are a “potentially useful alternative source of data” as they can “provide a more accurate cause-specific profile on injury-related mortality".

Stats SA’s Nzimakwe admitted there are also limitations to its method of relying on death certificate information for its estimates. It was “possible that there is under-reporting of suicide deaths” on death certificates and that post-mortems can provide more specific causes of injury-related deaths, he said.

However, he added, there was no data that suggested that 23 people committed suicide each day in South Africa.

WHO advises against using data to compare countries

Can we nevertheless say South Africa’s suicide rate is one of the highest in the world?

The latest Global Burden of Disease report, from the WHO, covering yearly mortality rates for 2012, contains estimates of suicide deaths for 171 countries.

But the WHO does not release rankings and advises against using the data to draw international comparisons. WHO statistician Gretchen Stevens explained to Africa Check that this is partly due to poor classification and registration of deaths in certain countries.

“There may be stigma, financial, or legal implications for listing suicide on a death certificate. Therefore the number of [suicide] deaths recorded in vital registration systems may be an underestimate, and the extent of the underestimate may vary by country,” said Stevens.

According to the WHO, while the compilations are useful in providing “context of how other countries with similar incomes or in the same region are doing”, they do not actually create rankings according to suicide rates and all comparisons must be made with the different ways different countries collect data firmly in mind.

Conclusion: No data shows 23 suicides per day in South Africa

Estimates regarding the number of suicides that take place in South Africa vary. Using death certificate information, Stats SA estimated that there were 592 suicides committed in 2013, a rate of almost two a day.

A nationally representative study of post-mortem reports in 2009 estimated that there were 6,471 suicides that year, or 18 every day. No data therefore suggests that 23 South Africans die every day due to suicide.

Uncertainty about international suicide rates hampers comparisons between countries. That is one reason why the World Health Organisation cautions against drawing international comparisons.

It is clear that there needs to be a more accurate recording of deaths in order to have a clearer understanding of this serious health concern. Advocacy organisations, such as the South African Federation of Mental Health, should strive to disseminate accurate information - not unsubstantiated claims.

FACTSHEET: The leading causes of death in Africa