Like all major breaking news events, Russia’s invasion of Ukraine has generated plenty of misinformation. In this report, we debunk false posts about the conflict shared in Africa.

On 24 February 2022, Russia invaded its neighbour, Ukraine. The ensuing conflict, which has captivated the world, has seen hundreds of civilian casualties and reports of more than a million people fleeing the country.

And like all major breaking news events, it has also generated plenty of misinformation. In this report, we debunk false posts about the conflict shared in Africa.

Putin did not announce attack on Kenya 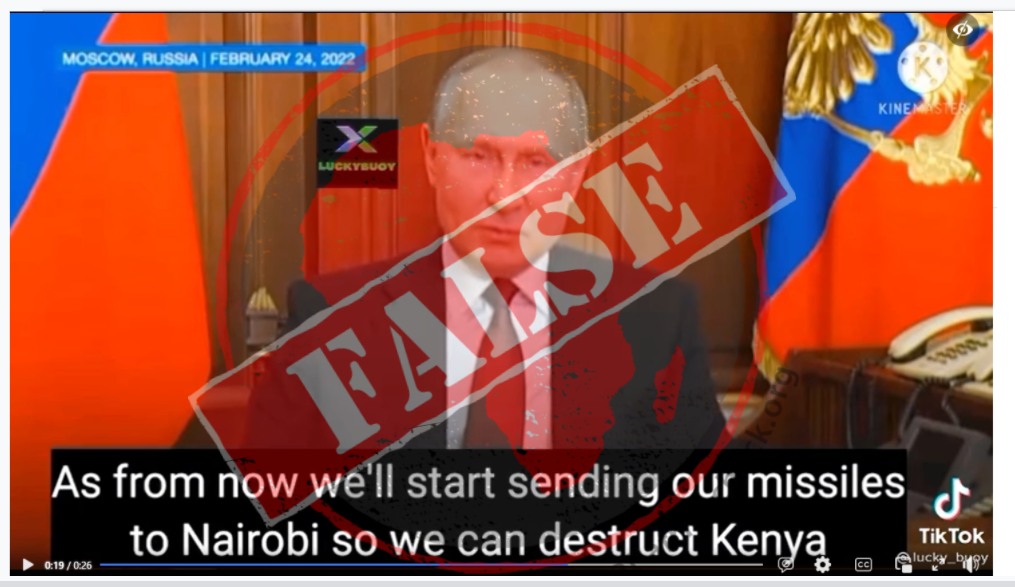 The clip, originally uploaded to TikTok, has been viewed more than 670,000 times in just a few days.

The 26-second clip shows a recent announcement by Russian president Vladimir Putin. English subtitles have been inserted over the Russian audio and detail Putin’s plans to attack Kenya. In one part the subtitles read: "As from now we'll start sending our missiles to Nairobi so we can destruct Kenya.”

This was after Kenya strongly criticised Russia at the United Nations Security Council, leading to the Africa country becoming a target for misinformation.

A search for the televised address by Russian president led Africa Check to the full video that this clip was taken from. Various news outlets reported on the address, in which Putin announced Russia's invasion of Ukraine.

A transcript of the speech, provided by Bloomberg News, does not contain any mention of Kenya or its capital Nairobi, nor plans to attack any African country.

The actual footage in the clip posted to Facebook is real, but the subtitles placed over the footage are false. The exact clip, with accurate English subtitles, can be found on various news websites (here and here).

Tip: It’s easy to add false subtitles to a video - always check an official transcript. Look out for grammatical errors. For example, the subtitles in this video say that Russia will "destruct Kenya”, rather than “destroy” it. 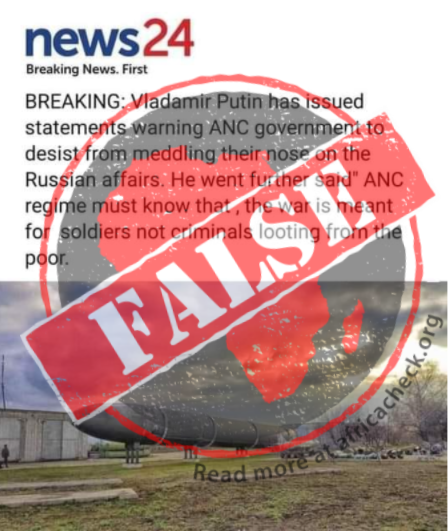 A graphic posted on Facebook appears to show a social media post from South African news agency News24. The graphic has been viewed over 900,000 times in a few days.

The text reads: “BREAKING: Vladimir Putin has issued statements warning ANC government to desist from meddling their nose on the Russian affairs. He went further and said ‘ANC regime must know that , the war is meant for  soldiers not criminals looting from the poor.’”

A reverse image search returned the same graphic on Twitter, 9GAG and other social media sites. No record of any corresponding article could be found on the News24 website or social media pages.

Africa Check spoke to News24’s public editor George Claassen, who confirmed that no such article had been published by the outlet.

Tip: Always verify screenshots of shocking news reports. Check if the article is on the website or if a legitimate social media post can be found. 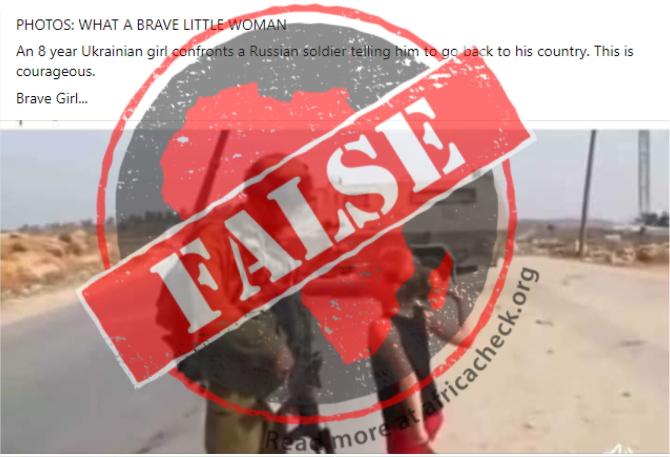 Pictures of a young girl confronting a soldier have been doing the rounds on Facebook in South Africa.

“WHAT A BRAVE LITTLE WOMAN,” reads the caption of the post, which has been viewed over 2.5 million times in just 24 hours. It continues: “An 8 year Ukrainian girl confronts a Russian soldier telling him to go back to his country. This is courageous. Brave Girl…”

But there are numerous red flags that suggest the story isn’t true.

First up are the clothes the young girl is wearing: a black, sleeveless shirt. The weather in Ukraine has been cold and snowy over the last week. For example, on the day this report was published, weather website Accuweather reported that the temperature would range from -3°C to 3°C in Ukraine’s capital Kyiv.

The uniform the soldier is wearing also does not match the uniform of the current Russian soldiers.

A Google search of “8 year old Ukraine girl” returned a YouTube video claiming the same thing as the Facebook post. Several users have commented on the video saying the girl in the video was not Ukrainian but rather Palestinian, and the soldier was Israelian. One user said the girl is named Ahed Tamimi.

Ahed Tamimi is well-known for confronting Israeli soldiers, having “faced a dozen charges from Israeli authorities after a video of her slapping and kicking an Israeli soldier stationed outside her home,” reports The Atlantic.

SkyNews reports that Tamimi had first come into international news in 2012, when she confronted an Israeli soldier at the age of 11. The image of her confrontation in 2012 matches one of the images in the Facebook post.

Tip: Before sharing a social media post do a quick Google search to see if the story matches the images or video. Also check comments or replies to see if it’s been fact-checked.

Namibian president has not promised to send troops to Ukraine 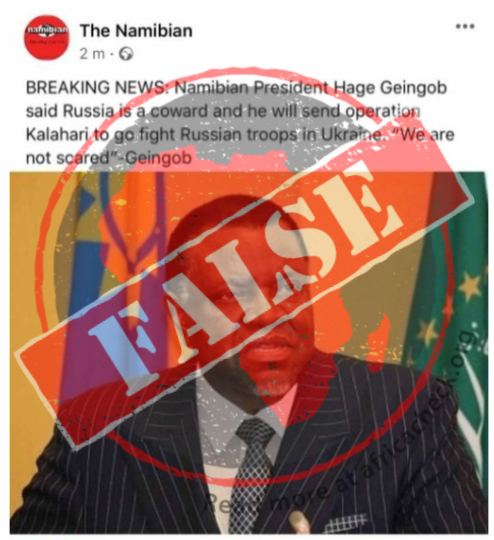 A number of social media users have posted screenshots claiming that Namibian president Hage Geingob said his country’s troops would “fly to Ukraine next week Monday”. This is seemingly to aid Ukraine in the conflict.

The newspaper’s official Twitter handle is “@TheNamibian” but the account that made some of the false claims went by “@Thenamibianewsl”. Using a handle or screen name which is similar — but not identical  —  to a trustworthy account is a common method used to spread false information.

The Namibian presidency has not released a public statement responding to the Russian invasion of Ukraine, although the country’s ministry of international relations and cooperation has.

In a statement, the ministry wrote: “Namibia’s position is guided by Article 96 of the Namibian Constitution which encourages the settlement of international disputes through peaceful means. Namibia, therefore, calls on all parties involved to resolve the conflict through a peaceful dialogue.”

There has been no indication that Namibia would be sending armed forces or other military aid to Ukraine. In subsequent press releases, the ministry reiterated its call for a peaceful resolution to hostilities.

Tip: Always check the source of  a “breaking news” claim. Ensure that it came from a trusted news source and not an impersonator by looking closely at the name and handle of the account sharing the news.