Skip to main content
Back to Africa Check
SCREENGRAB/NTV

Among other unconventional ideas, George Luchiri Wajackoyah says marijuana exports will solve Kenya’s economic problems. But his economics of ganja don’t add up – whether it’s legal or not.

Many expect Kenya’s presidential race to be a straight shootout between deputy president William Ruto and ex-premier Raila Odinga, who rather oddly enjoys the support of the departing president Uhuru Kenyatta.

But a third contender, George Wajackoyah, is causing an unlikely buzz. Opinion is split on whether he’s a flash in the pan, a potential kingmaker or just a spoiler.

Polls suggest the 62-year-old could attract a youth vote disgruntled with establishment politics. A key reason for his appeal is a contrarian campaign. He proposes to hang the corrupt, suspend the constitution and introduce a four-day workweek. 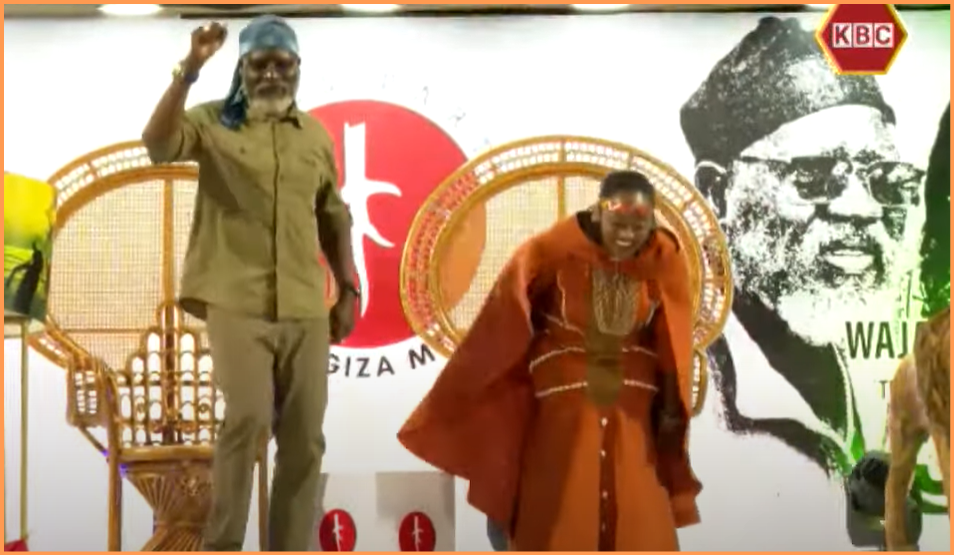 But it is his plan to legalise and commercialise marijuana that has many talking – and the clergy hot under the collar. Wajackoyah, who leads the suitably titled Roots Party, says proceeds would help offset debt to China. He often says he will smoke his first joint as soon as he is sworn in.

In a June 2022 interview on Citizen TV, Kenya’s most watched broadcaster, Wajackoyah outlined how marijuana revenue would pay off public debt. He repeated some of his claims in later interviews.

By whatever name, illegal in Kenya

Marijuana has many names, including ganja, weed and dagga. In Kenya, where it and any other plant from the genus cannabis is illegal, it’s also known as bhang.

In July, Kenya’s government anti-drug agency in a statement insisted that the “recreational and commercial trade” in marijuana remained illegal.

A Kenyan on TikTok picked up Wajackoyah’s revenue claims and did the maths, concluding the idea was viable. The resulting video has attracted more than 440,000 views, was reposted on Twitter and is doing the rounds on WhatsApp.

One of our readers asked our Kenya office to vet Wajackoyah’s claims. We picked some from the Citizen TV interview and went digging.

Africa Check has asked Wajackoyah’s campaign for the source of his figures.

In the Citizen TV interview in June, Wajackoyah said there were “special sacks scientifically made for marijuana”. He added that a full sack goes for “US$3.2 million”.

In his later interviews Wajackoyah said one gram of marijuana costs “$78” and one sack costs “$302 million”. (Note: His figures vary widely, and we have sought clarification from his office.)

Nonetheless, is there a “special sack” of marijuana that costs $3.2 million, or even $302 million?

First, how is marijuana packaged?

Dr Bryce Pardo is the associate director of the nonpartisan Rand Drug Policy Research Center in the US and has studied cannabis policy reforms in the Americas.

Pardo told Africa Check that cannabis for legal retail or medical sale “has to be packaged in special ways to make the product inaccessible to children and to safeguard against tampering”.

Pardo said there were “larger wholesale packaging requirements to prevent buyers and sellers cheating regulators through tamper-proof pouches that cannot be resealed after opening”.

“But those are often inexpensive mylar or plastic bags,” he said.

Dr Michael Armstrong is an associate professor at Brock University in Canada. In April 2022, he co-wrote an article on marijuana sales in Canada during the Covid pandemic.

The drug is also legal in that country. Armstrong drew our attention to packaging regulations for Canada’s retail marijuana. These require that it’s sold in small packs, also measured in grams. Armstrong also sent us some examples of marijuana packaging.

Prof Jeffrey Miron is a senior lecturer and the economic studies director at Harvard University in the US. He has written extensively on drug policy and the economics of marijuana legalisation.

“I can’t think of any reason why there will need to be any ‘special sacks’ for packaging marijuana,” he told Africa Check.

“It is roughly like tobacco. You can package it in a little tin, a zip-locking bag, or in the form of marijuana cigarettes.”

Does the maths add up?

“I don’t think there is a bag big enough for that amount of cannabis,” Pardo told Africa Check.

The prices Wajackoyah gives for marijuana are excessive, and there are no special “scientifically made” sacks for its packaging. We rate the claim as incorrect. – Alphonce Shiundu

According to the most recent official data, Kenya’s public debt was KSh8.4 trillion (US$73 billion) in March 2022.

Prof Jeffrey Miron is a senior lecturer and the director of economics studies at Harvard University in the US.

“The amount of revenue you could generate from legalisation of marijuana even if you did it in the absolute best possible way, is pretty modest,” he told Africa Check.

These revenues were not trivial, Miron said, but didn’t compare favourably to the size of budget deficits.

And marijuana is just one thing people spend their money on. It would still have to compete with alcohol, tobacco, food and other expenses on basic needs, he said.

“Even if you tax it at a moderately higher rate and avoid generating a black market, it is not going to make a fundamental difference to the budget imbalances that most economies are experiencing,” Miron said.

“Canada last year alone got US$487 billion out of marijuana.”

Wajackoyah offered up more examples of marijuana’s rewards. “Canada last year alone got US$487 billion out of marijuana,” he said.

Dr Daniel Myran is a public health physician and a fellow at the Canadian Institutes of Health Research. With Armstrong, he co-wrote the April 2022 article about Canada’s marijuana sales during the Covid pandemic.

“Those numbers are inaccurate and hundreds of times higher than the value of cannabis sold in Canada,” Myran told Africa Check.

Armstrong added that the claim was wildly unrealistic.

Marijuana is legal in Canada but its production, distribution, sale and possession are strictly regulated.

Armstrong directed Africa Check to a dashboard from Canada’s data agency for the most recent numbers on the retail sales of legal recreational cannabis products. In 2021 this totalled CA$3.835 billion (about US$2.98 billion).

All the evidence we have seen shows that Canada did not generate US$487 billion from marijuana in 2021. And the claimed amount is in fact higher than Canada’s total budgetary spending for its 2020/21 financial year. – Makinia Juma

“The US, two weeks ago, decriminalised marijuana from being a federal offence.”

Wajackoyah’s timeline for this claim works out to mid-May 2022.

On 1 April 2022, the US house of representatives approved a bill to decriminalise marijuana. The bill is now before the US senate. Until it is passed by the senate and assented to by the president, marijuana remains illegal.

“US federal law makes it illegal in every state, including the ones that have passed cannabis [legalisation] laws,” said Armstrong.

“However, the federal law is not enforced inside states with cannabis laws: the US Congress forbids federal enforcement against state-authorised medical cannabis via a temporary law.”

Armstrong added that US presidential administrations had chosen not to enforce federal law against state-authorised recreational cannabis.

Harvard University’s Miron confirmed that marijuana “is still illegal in the US”.

“For banking purposes, almost all banks are federally supervised. The rules of the federal system say a bank can’t do business with an illegal activity,” he told Africa Check.

“So, if you are a state-legalised marijuana store and you want to deposit your revenues in a normal bank … you can’t do any of that stuff.” – Alphonce Shiundu

In 2018, David Parirenyatwa, then Zimbabwe’s health minister, announced the legalisation of cannabis production. He also issued regulations guiding the production of cannabis for medicinal and scientific purposes.

All producers must be licensed and adhere to strict production, distribution and security protocols.

But cannabis for recreational use remained illegal, the minister said.

In 2020, Zimbabwe’s agriculture marketing authority issued regulations on growing industrial hemp. Its definition of “industrial hemp” included “the plant cannabis sativa and any part of the plant including the seeds thereof and all derivatives, extracts and cannabinoids”.

We therefore rate this claim misleading. (Note: Africa Check defines a misleading verdict as one where elements of the claim are accurate, but presented in a way that is misleading.)  – Tess Wandia

“However, the use or possession of cannabis by a child anywhere, or by an adult in public, is not decriminalised,” the summary said.

In September 2020, a bill to effect the court decision was introduced in parliament.

While it is legal to consume marijuana in private, public consumption is still prohibited. – Tess Wandia

Marijuana production and use has existed in Morocco for years under what researchers at the Mohammed V University have called “a subtle mix of prohibition and tolerance”.

The country’s house of representatives adopted a bill to legalise the use of cannabis in May 2021 and set up a regulatory agency to control production and trade.

But recreational use is still prohibited. – Tess Wandia

“Israel [is] the biggest grower of marijuana in the world.”

We asked the International Narcotics Control Board, an independent body that monitors the United Nations’ global drug control conventions, about the claim.

The board sent us data that showed the United Kingdom was the biggest producer of cannabis in 2020, with 238.7 tonnes, or 36.7% of the global market. Israel was the fourth-largest producer with 24.6 tonnes.

A 2021 report from the United Nations Office on Drugs and Crime has data on cannabis cultivation, production and eradication but doesn’t list Israel.

The report shows that Morocco has the biggest area under cannabis cultivation. This was 47,500 hectares in 2018, but dropped to 21,048 hectares in 2019, the most recent year for which data is available. – Dancan Bwire

“Rwanda has legalised the product.”

In June 2021, Rwanda published new rules to govern the cultivation, processing, export and security of cannabis for medical purposes.

Does this mean it is legal? “Marijuana is illegal in Rwanda. There is a recent exception for commercial cultivation of medical cannabis,” Yolande Makolo, the Rwanda government’s spokesperson, told Africa Check.

Makolo also shared a 2020 brief with the legal context on the framework for the production of medical cannabis in Rwanda.

“The president of Malawi is now asking Malawians to uproot tobacco … and grow marijuana.”

Malawi is a major tobacco producer, with the leaf being the country’s leading foreign exchange earner.

Wajackoyah claimed Malawi president Lazarus Chakwera had asked his citizens to “uproot tobacco” due to “inadequate” proceeds, and “grow marijuana”. He has also claimed he has been invited to Malawi as an “ally”.

Malawi has a law and an agency that governs the cultivation of marijuana for industrial and medicinal purposes. But neither allows recreational use.

In his state of the nation address on 12 May 2022, Chakwera said Malawi’s reliance on tobacco was “seriously threatened by declining demand worldwide”.

“Clearly, we need to diversify and grow other cash crops like cannabis which was legalised last year for industrial and medicinal use,” Chakwera said.

“The Malawi president has never called for the uprooting of tobacco. What he has said is that his vision is to diversify agricultural production,” he said.

We therefore rate the claim as misleading. – Dancan Bwire