Has Buhari’s government plunged Nigeria into $80 billion in debt?

The current government has put Nigeria into a debt of $80 billion.

Nigeria’s 2019 elections are just months away, and Peter Obi, the recently announced Peoples Democratic Party candidate for vice president, has been picking holes in the current administration’s economic policies.

In one instance Obi, the former governor of Anambra State, accused President Muhammadu Buhari’s government of borrowing too much, with little to show for it.

“This present regime has plunged us into a deeper debt profile to the tune of $80 billion, an indication that the nation is collapsing,” Vanguard newspaper quoted him as saying on 24 October 2018.

Has Nigeria racked up US$80 billion – some N25 trillion – in debt? We looked at the country’s books.

Obi is yet to respond to Africa Check’s questions about the source of his claim and whether he was referring to local or foreign debt, or both. (Note: We will update this report should he do so.)

The Debt Management Office coordinates the management of Nigeria's public debt. This includes domestic, external and subnational debt, as well as bonds, treasury bills and other tools the government can use to raise money.

The subnational debt – owed by lower levels of the government – includes loans taken out by Abuja’s federal capital territory and the country’s 36 states..

Naira debt has almost doubled since Buhari took over

The debt office reports on Nigeria's debt every three months. Its website shows that at the end of March 2015 - two months before Buhari took office on 29 May - the country owed a total of N12 trillion.

By the end of June 2018, total public debt had almost doubled to N22.4 trillion. The debt office said the latest increase comprised of a US$2.5 billion Eurobond issued by the government in February 2018. (Note: A Eurobond is a loan given out in a currency that is different to the currency of  the country where it is issued.)

This took Nigeria’s total debt to US$73.2 billion, using the Central Bank of Nigeria’s 2018 exchange rate of N305 to the dollar. 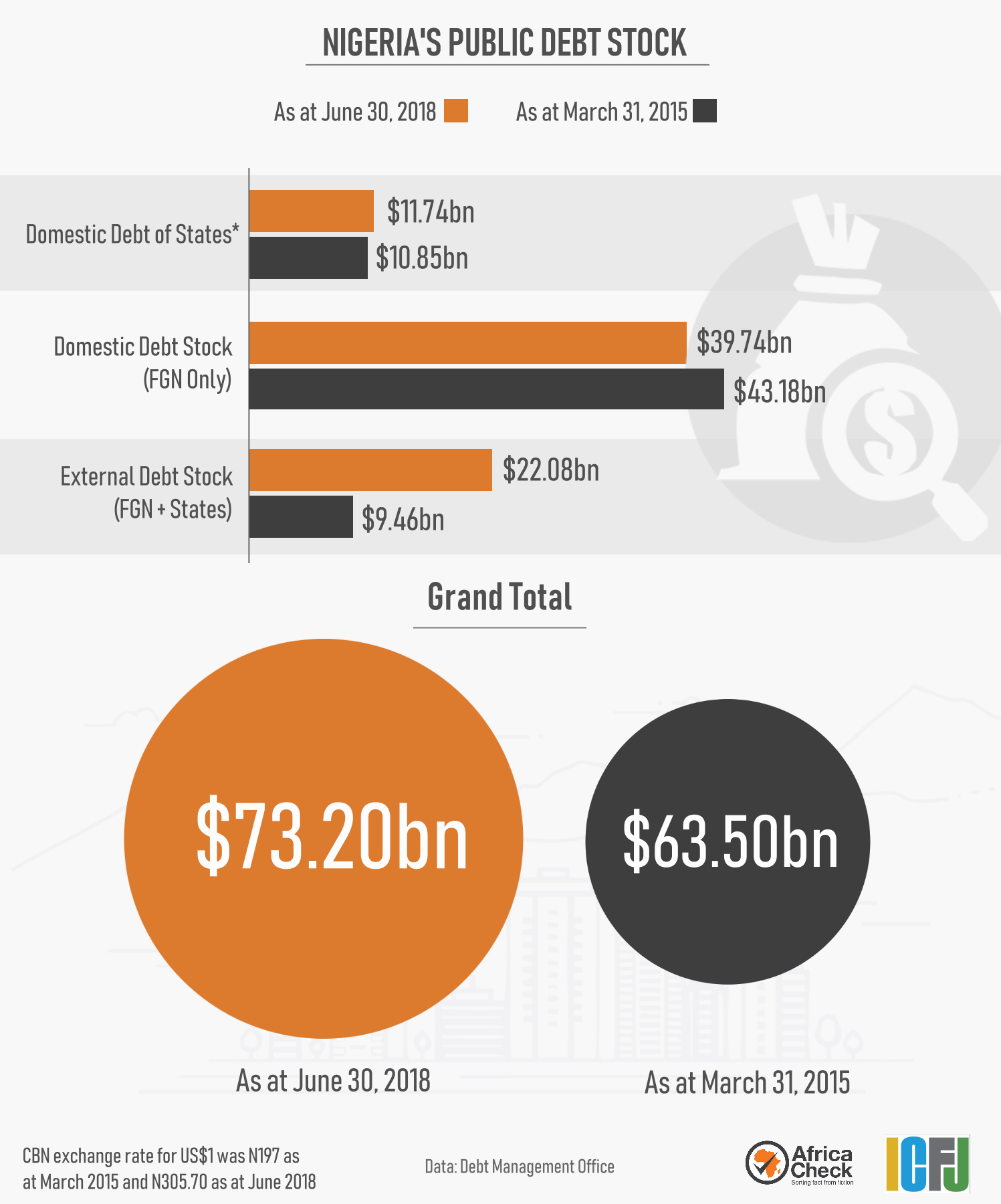 What is the government borrowing for?

The debt management office justified the borrowings in its 2017 report on Nigeria’s national debt.

Prof Olufemi Saibu of the economics department at the University of Lagos focuses on development macroeconomics and public finance. He told Africa Check the debt might be worrying, but would be justified if it were used for development projects and not just for regular spending on, for example, salaries and overheads.

“The debt profile is high but it's not in the red lines yet,” Saibu said. “The problem is that the debt cannot continue to increase; there must be a check on it. And the question is, what are they using the debt for? The quality of projects, productivity and impact of the projects are what matters.”

Does Nigeria’s government owe even more?

While Obi’s claim is largely true, the real picture of Nigeria’s debt is larger than what’s reported by the debt office, according to Atiku Samuel. He is the head of research at BudgiT, a civil society organisation that works to make public spending transparent and accountable.

“What you see at the Debt Management Office is just a fraction of Nigeria's debt,” he said. “There are special accounts that are dedicated by law, but unfortunately the federal government has been taking funds from [them] to meet its budgetary obligations.”

Samuel said the government had been drawing from “funds like the ecological fund, even borrowing from the excess crude account. Another big component is debt to contractors and the overdrafts it takes from the Central Bank - which is now about N4 trillion - and there are also judgment debts.”

These would add to the debt “if you look at debt from the globally accepted definition, as these are still obligations to the government”.

Debt Management Office records show Nigeria owed N12.1 trillion in June 2015, a month after Buhari took office. This was US$63.8 billion at the exchange rate of the time. By June 2018 total public debt had risen to N22.4 trillion, or $73.2 billion.

An expert said the debt could be even higher as the government took money from funds set aside for other purposes.

We therefore rate the claim as mostly correct.

The current government has put Nigeria into a debt of $80 billion.