Has South Africa lost R700 billion to corruption since '94?

With “Corruption Fact #1” – that South Africa has lost R700 billion to corruption over the last 20 years – trade unions and civil society organisations have been rallying citizens to join marches against corruption today.

Vavi also reportedly cited the number to urge Nissan assembly plant workers and a gathering of the National Union of Metalworkers of South Africa members to join the march.

When he tweeted the R700 billion figure, a Twitter user replied: “No ways. Lucky guess?”

Is it a guess or the result of thorough research? Africa Check got out the calculators.

‘A percentage of the GDP’ 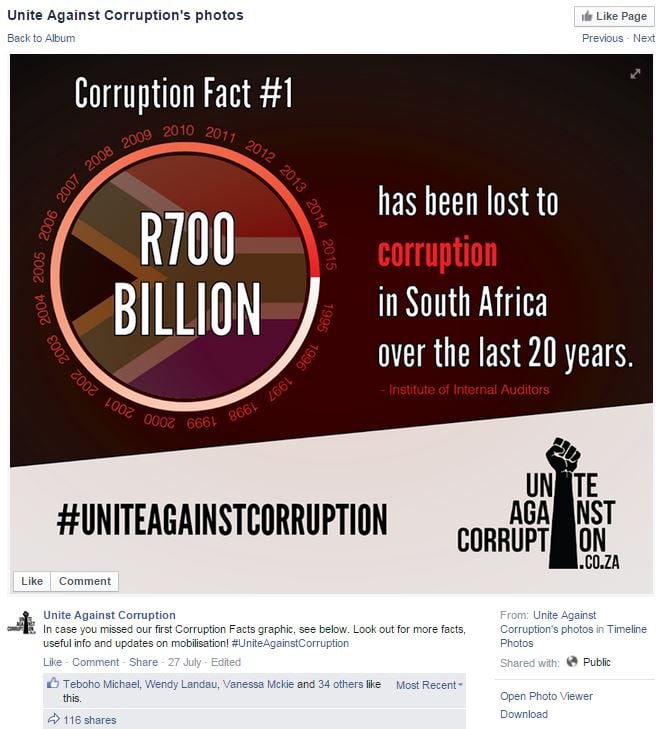 On social media, Unite Against Corruption attributed the claim to the Institute of Internal Auditors. This likely refers to the January launch of the Anti-Intimidation and Ethical Practices Forum, an association of different organisations fighting corruption.

At the event, the forum’s chair and head of the Institute of Internal Auditors South Africa, Claudelle von Eck, reportedly said: “The cost of corruption in the last 20 years... we have lost R700-billion.”

Von Eck confirmed to Africa Check she had made the claim but said she was quoting the Institute for Accountability in Southern Africa. The institute’s head, Paul Hoffman, was quoted using the R700 billion figure last year. (Updated from R675 billion he cited the year before and in 2012.)

But Hoffman passed the buck to Tendersure, a web-based tendering tool, owned by a company called Sentigol. “[Tendersure] worked that out as a percentage of the GDP… 20% of the GDP over the last 20 years works out to that,” Hoffman told Africa Check.

An October 2011 article in Engineering News quoted the head of Sentigol, Werner Coetzee, as saying research by international anti-corruption bodies showed Africa to lose “about 25%” of its gross domestic product (GDP) to corruption.

Coetzee then explained that 25% of South Africa’s GDP of R2,700 billion (likely 2010’s) came to R675-billion and that this figure was potentially lost to corruption.

But he told Africa Check he was misquoted: “I don’t know how anyone would arrive at that number.” The businessman said he once attempted to calculate the cost of corruption in the past 20 years, but gave up because it would “ignore the corruption during apartheid”. 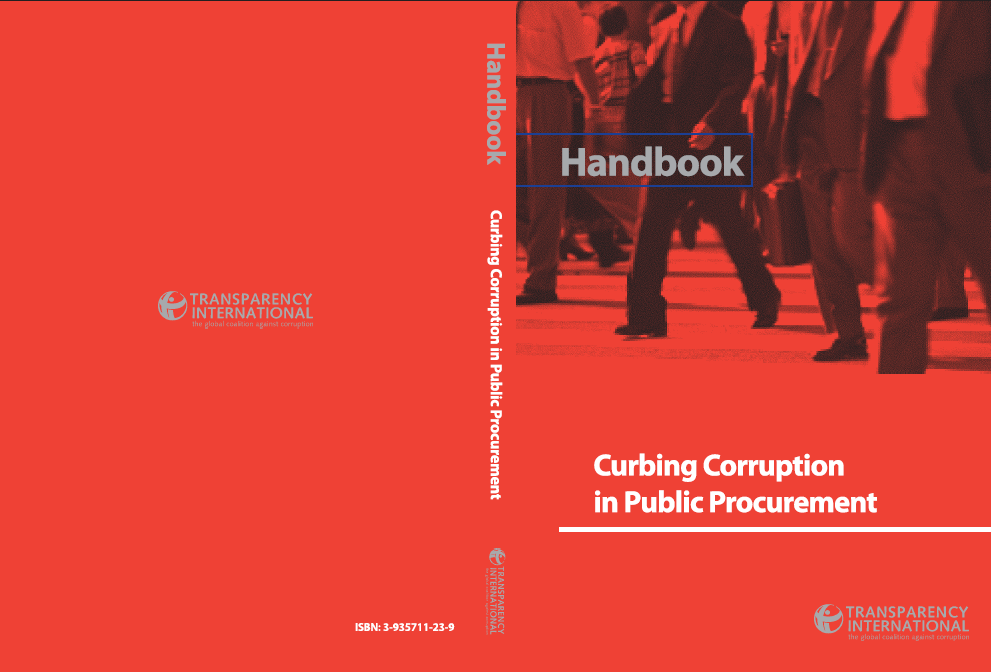 Coetzee didn’t pluck the corruption formula out of thin air, but he got the wrong end of the stick.

Global civil society organisation Transparency International published a handbook called Curbing Corruption in Public Procurement in 2006. The very first paragraph states “damages from corruption” is usually estimated at “between 10% and 25%, and in some cases as high as 40 to 50%” of a country’s public procurement contracts – not its GDP.

Yet the bibliography does not contain any reference to studies showing how this share was arrived at. Africa Check contacted the organisation’s public sector integrity programme head, José María Marín, who said he’d look into it, but we haven’t yet received a response. (Note: He responded after this report was published and his comment is included at the bottom of the report.)

Since then the statement has become a tumbleweed claim: rolling along year after year, from one report to another, without source or context, supposedly holding true wherever it goes.

So how did we end up with “R700 billion lost to corruption in South Africa in the last 20 years”? Here is Africa Check’s theory, give or take R5 billion:

1. The formula from Transparency International, or the various other organisations that quoted its information, made its way to South African Treasury official Sonwabo Tshoko who stated in a 2010 presentation: “It has been estimated that R30 billion per year, which is 20% of the overall government procurement budget of R150 billion, is being lost or is disappearing into a black hole of fraud and corruption.”

(Tshoko has since left and Africa Check could not get hold of him or more information on the calculation via Treasury spokesman Phumza Macanda.)

2. South Africa’s then head of the Special Investigating Unit, Willie Hofmeyr, used this information when asked to estimate the cost of corruption in parliament in October 2011. According to the minutes, “Hofmeyr responded that it was difficult to do so, but one suggestion by National Treasury was that it might amount to about 20% of the annual procurement budget, or about R25 billion a year”.

(Hofmeyr confirmed to Africa Check he got the information from Treasury, but couldn’t remember the exact source.)

3. The head of the Institute for Accountability, Paul Hoffman, attributed the figure of R30 billion per year to Hofmeyr in a 2012 conference report. However, it seems that when the time came to present the report, he used R675 billion as a total figure lost to corruption since 1994. A news report said: “Hoffman based the figure of R675 billion on government’s admission that the economy loses R30 billion per year to corrupt activities. The disclosure elicited visible shock among conference goers.”

So how much has SA really lost to corruption? 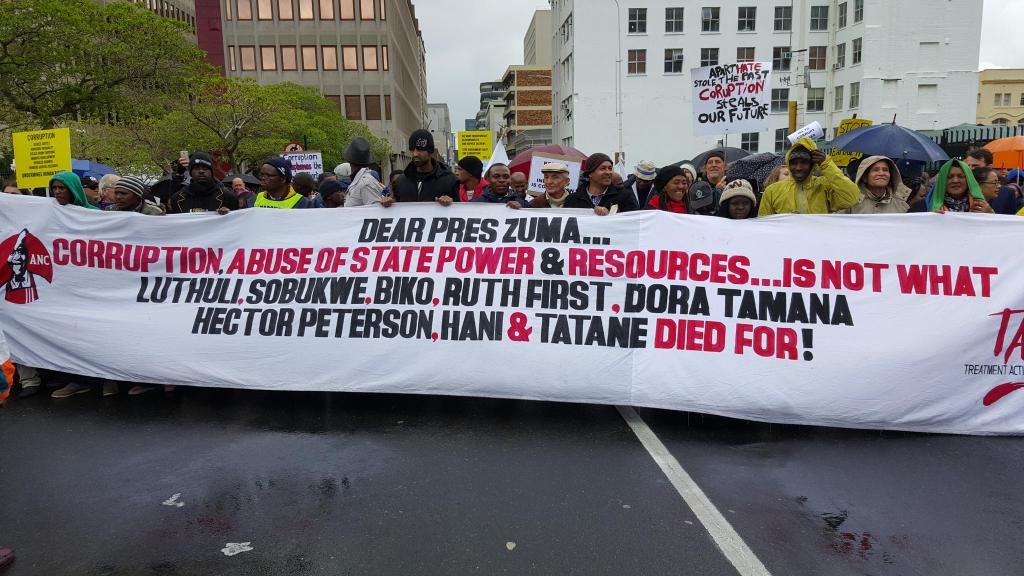 The frustrating – and logical – answer is we just can’t say for sure.

Macanda said South Africa’s Treasury does not attempt to calculate the cost of corruption. “Our observation is that people speculate and also tend to use the word corruption when what they are talking about is irregular, unauthorised or wasteful expenditure,” she said.

Africa Check spoke to Hennie van Vuuren, research associate at the Institute for Justice and Reconciliation (IJR) and writer of a 2005 Transparency International country study report on South Africa.

He said the idea that corruption costs 20% (or 10% or 25%) of public procurement comes from the assumption that middlemen involved in corruption demand 8 to 10% of a contract’s value. “But this differs from transaction to transaction and industry to industry,” he said.

Ways to gauge trends in corruption include perception surveys and tallying detected cases. Van Vuuren said one could even include illicit outflows - where private companies move money to tax havens abroad - in the broader ambit of corruption, which was estimated to be in the region of R300 billion in 2012 alone.

“Our constant need to define corruption in monetary terms ignores the much more fundamental costs of corruption - carried by individuals in weakened forms of government,” he said.

The head of governance, crime and justice division at the Institute for Security Studies, Gareth Newham, told Africa Check “we simply don’t know what the actual amount is because corruption is a crime in which both parties benefit and will seek to hide”.

However, Newham said he thinks a “considerable” amount has been lost to corruption “given the large scale of the problem and the high-level involvement of our political elite in corruption”.

“Various people, various institutions have come up with estimates. I don’t know how they arrive at these figures,” he said. “I am comfortable to say there is a high level of corruption in SA but you can’t rely on those estimates.”

At today’s anti-corruption march there will surely be many placards saying “South Africa lost R700 billion to corruption since 1994”. Although a firm figure helps spur citizens to action - in a country where experts agree that it’s a big problem - this specific estimate is not reliable.

The amount probably stems from a claim that about 20% of a country’s public procurement budgets disappears into backpockets, attributable to Transparency International as far as we could tell, but not backed up by research studies. Since then it’s been mangled beyond recognition in South Africa.