Have mining diseases fallen 42% in SA? It depends on how you select the data

There has been a “42% reduction in occupational diseases in the mining sector.”

For the past decade, lawyers representing thousands of South African mine workers suffering from the lung disease silicosis have been locked in a bitter legal battle for compensation with some of the biggest mining companies in the world.

The mines – which include AngloGold Ashanti, Gold Fields and Harmony Gold –  are accused of “stalling” silicosis claims. Earlier this month, Business Times reported that Richard Meeran – a lawyer representing many  of the miners -  said the “families of workers fear they will die during court delays, resulting in the loss of their rights to general damages”.

The lawsuits have shone an uncomfortable spotlight on an increasingly embattled industry. It has been nearly two years since police shot and killed 34 striking mine workers at Marikana in South Africa’s platinum belt. Today the platinum industry is in crisis, mired in what is said to be the longest strike in South Africa’s history. The country’s GDP has shrunk for the first time since 2009. Mining output has reportedly fallen by 24.7% — its steepest drop in half a century.

It is against this backdrop, that South Africa’s department of mineral resources  placed a billboard on the M2 highway near Johannesburg advertising a 42% reduction in occupational diseases in the mining sector.

What are occupational diseases? 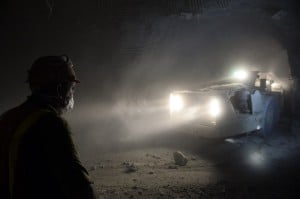 The Mine Health and Safety Act requires all mines to maintain a system of medical surveillance and monitor employees exposed to health hazards. Based on the medical surveillance, the mines’ occupational medical practitioners must compile an annual report covering the health of all employees at the mine.

The number of occupational diseases must be reported to the Mine Health and Safety Inspectorate, who have a mandate to “safeguard the health and safety of mine employees and communities affected by mining operations”.

What years are being compared?

The department’s spokesman, Ayanda Shezi, said in an initial response that the reduction was calculated by comparing data on occupational diseases from the “current period” to data compiled in 2009 . Explaining why that timeframe was chosen, she said:  “[T]hat’s the term of the current administration in government”.

We followed up by asking Shezi what she meant when she referred to the “current period”. Was she referring to 2014 or 2013 or the 2012/13 financial year. She has yet to respond, despite numerous emails, calls and text messages over the past eight days. 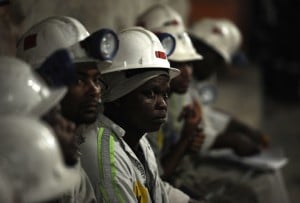 In order to evaluate the claim we therefore had to make use of the most recent publicly available data, which was released in October 2013 by the mineral resources department. It shows that 6,002 cases of occupational diseases were reported in 2012. In 2009 – the year Shezi said the department had used as a starting point for its calculations - there were 8,040 reported cases.  If you look at the reduction over that period, you get a 25% reduction in occupational diseases, not 42% as claimed. Questions emailed to Shezi on 27 May 2014 about the discrepancy have gone unanswered.

Based on our own calculations using the inspectorate’s data, it appears that the reduction cited on the billboard could have been calculated by comparing the number of occupational diseases reported in 2008 and 2012. This would result in a 41.98% reduction from its peak.

Based on the dates that the department of mineral resources provided to Africa Check, and publicly available data from the department’s Mine Health and Safety Inspectorate,  the number of reported cases of occupational diseases is certainly declining.

The department, which repeatedly failed to respond to our queries, might claim the advertisement of a 42% reduction is correct if measured from 2008 to 2012.

However, for this to be valid, it would need to make clear that the number of reported cases peaked in 2008. It is bad statistical practice to cherry-pick the start or end dates of any study to show maximum possible decline, without acknowledging that the start date recorded was a peak. The decline may, at least in part, be simply a return to previous lower levels.

There has been a “42% reduction in occupational diseases in the mining sector.”