A Twitter influencer compared the promises supposedly made by the three presidential frontrunners to northern Nigerians ahead of the 2023 election. We checked his claims.

Three claims about the promises made by Nigeria’s leading presidential candidates to vote rich northern Nigeria.

One correct, one misleading, one incorrect.

Just over a month before Nigeria's critical February 2023 general elections, campaigners are pulling out all the stops to sell their candidates. 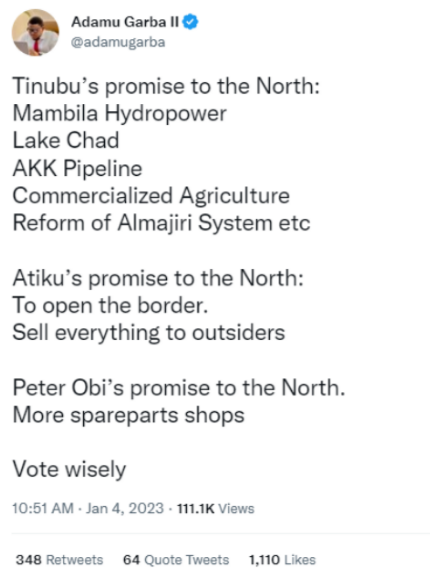 The governing All Progressives Congress (APC) hopes to retain power, having been re-elected in 2019. It is strongly challenged by the Peoples Democratic Party (PDP), which it toppled in 2015, and the Labour Party.

It is against this background that Adamu Garba, a leading voice on social media for the APC, in January 2023 tweeted a list of what he claimed the presidential candidates of the three parties had promised the country’s north.

The region is considered the largest voting bloc, with 50.16 million voters - more than half of the 93.4 million Nigerians registered to vote in the 25 February elections. The north has also been instrumental to the APC’s two presidential victories.

Garba, an entrepreneur and a former presidential aspirant, is part of a campaign group backing Tinubu. He is from the north.

His tweet to his more than 93,000 followers was viewed over 111,000 times. But are his claims about the presidential candidates’ promises correct?

Reliable electricity continues to elude many Nigerians for a number of reasons. The Mambilla hydropower project is expected to add capacity to the grid.

The project is located in the northern Taraba state and the contract for it was signed in 2017. It is projected to add 3,050 megawatts (MW) to the grid once complete. There are however concerns as to the slow pace of the project.

The Ajaokuta-Kaduna-Kano (AKK) gas pipeline from the south to the north of the country is expected to increase Nigeria’s energy security.

Agriculture is a key economic activity in Nigeria, contributing a quarter to the gross domestic product. In the north,  farming and livestock rearing are major means of livelihood and land use.

The Almajiri system, prevalent in northern Nigeria, is where children from poor homes, mostly boys, are sent to distant places to acquire Qur’anic education under Islamic clerics. These children, however, often end up begging in the streets.

In Tinubu’s manifesto he does promise to complete the pipeline and to add value and improve incomes in agriculture, pledges he has repeated while campaigning.

He has also pledged to ”recharge” Lake Chad – it is not clear what this means but the lake has shrunk by as much as 90% due to climate change – and to reform the Almajiri system.

Tinubu did make these promises, and on this score, we rate the claim as correct.

But the gist of the tweet is also that Tinubu has better plans for Nigerians if elected, compared to his rivals.

A quick search shows Atiku, for example, has also pledged to complete the Mambilla power project, as has Obi.

“The issue is whether these promises can be fulfilled,” Yusufu said, adding that the incumbent APC administration had not met all its pledges.

“Atiku’s promise to the north: To open the border. Sell everything to outsiders.”

Atiku Abubakar was Nigeria’s vice president from 1999 to 2007 under the Peoples Democratic Party administration of president Olusegun Obasanjo. He joined the All Progressives Congress in 2014, helping defeat the PDP in elections the following year, but is now back on the PDP’s ticket.

While campaigning in the northwestern state of Katsina in December 2022, Abubakar did promise to restore peace in the country and open all borders if elected.

Nigeria has struggled with insecurity in recent years. In 2019 the country also shuttered its borders in an attempt to curb smuggling.

“But it is misleading to say that is a promise to northern Nigeria,” political scientist Abdullahi Yusufu told Africa Check.

“If the borders are open and there is increased trade and other things whether good or bad, it affects the whole country, not just the north. When [president Muhammadu] Buhari’s administration closed the borders, it affected all of us in the country,” he said.

‘Sell everything to outsiders’

Garba’s claim that Abubakar wants to “sell everything” is a reference to his promise to privatise dysfunctional companies and infrastructure.

Abubakar made the proposal when he ran for president in 2019 and has continued to insist that public assets are better run by the private sector.

This has been seized upon by Tinubu, who often refers to Abubakar as “Mr Sell Everything” or “Mr Privatise”. Tinubu claims his rival wants to sell national assets to “the highest bidder and his cronies and run off with the proceeds”.

Abubakar, for instance, has proposed that the country’s petroleum refineries, which are largely not functional, should be sold to private companies that can revamp and run them profitably while creating jobs.

But there is no evidence Abubakar has promised to sell public assets to “outsiders”.

What Abubakar did promise the north

In his manifesto, campaign speeches, and media interviews, Abubakar has made some promises that would more specifically benefit the north.

These include his promise to prioritise the Mambilla hydropower project and the broader development of the northeast, which has been significantly set back by the Boko Haram insurgency.

He has promised to end insurgency in the north using alternative approaches, including diplomacy, the use of traditional institutions, better intelligence and border control.

There isn’t publicly available evidence Obi has ever made this promise, either in his manifesto or his speeches on the campaign trail.

Yusufu Zoaka, professor of political science at the University of Abuja, also told Africa Check the claim about Obi is false.

“Obi has made some promises to the north but not to bring more spare parts shops,” he said.

“The person that made that tweet is trying to promote his own candidate and put the other candidates in a bad light. Saying Peter Obi wants to bring more spare parts shops to the north is not really derogatory because we all need spare parts because most of us drive used cars.

“The problem is that the person is trying to say that Obi is only interested in promoting his own people, the Igbo, who are the major dealers of motor spare parts across Nigeria, not just in the north,” he said.

Politics is like a game: every player has his own game plan, including propaganda, Yusufu said.

“This is part of the strategy they are using to promote their candidates. It is propaganda; a politician trying to sell his presidential candidate by all means at the expense of other candidates. In propaganda, there is often an element of truth mixed with lies,” he said.

Zoaka said democracy does not do well in countries with low incomes.

“Nigeria’s per capita is just over US$2,000. This means that a large portion of the country’s population is poor and illiterate. They can be easily manipulated by politicians,” he told Africa Check.

“This kind of social media post plays on the ignorance of many impoverished and illiterate voters in the north. And the narratives sell especially in rural areas, where many cannot spot false information. They are likely to believe false narratives, especially those regarding ethnicity and religion, and share them with others,” Zoaka said.

Fage, however, said the impact of the narrative could be reduced when the people realise that the person saying it is partisan.

Apart from his pledge to tackle Nigeria’s insecurity problems, Obi’s main promise to the north has been for an “agricultural revolution” to reduce poverty.

Three claims about the promises made by Nigeria’s leading presidential candidates to vote rich northern Nigeria.

One correct, one misleading, one incorrect.

Five Nigerian presidential election candidates set out their plans for the country should they win in 2023. We examined their claims.