Published on 28 February 2017
The terror group Boko Haram has put Nigeria on the world map for the wrong reasons. The group’s atrocities range from the abduction of 200 school girls in Chibok in 2014 to suicide bombings and the large scale displacement of residents in the country’s north-east.

Women and children are often caught in the insurgency’s crossfire. In a tweet, the New York Times drew attention to an article about their suffering.

It stated: “The humanitarian crisis in north-eastern Nigeria is so bad that almost all children under 5 have died.”

Could an entire population category really have been wiped out? 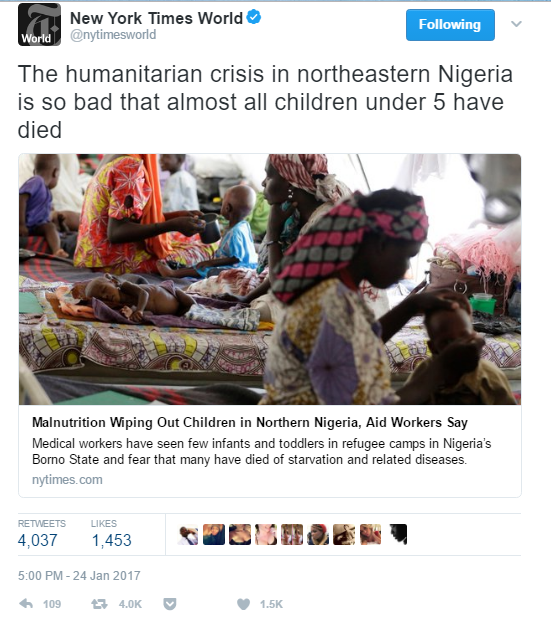 The region comprises 6 of Nigeria’s 36 states - Borno, Adamawa, Bauchi, Gombe, Taraba, and Yobe - and had an estimated population of 26 million last year.

The 2016 estimate does not have a breakdown of population categories but if 16% of the region’s inhabitants were children younger than 5 - as Nigeria’s 2006 census showed - the region would have around 4.16 million children in this age group. This Sunday Ichedi, the head of public affairs at the Nigeria Bureau of Statistics, told Africa Check.

At the end of last year, the International Organisation for Migration counted 1,770,444 internally displaced persons in 106 of the 112 local governments they were able to access in the north-east region. Close to a quarter of the displaced population were kids below 5.

For the New York Times’ tweet to be true, millions of children therefore had to have died. This is incorrect, as we will set out below.

Secondly, reporter Donald McNeil jr. cited “aid agencies” as the source of his claim, specifically Médecins Sans Frontières. (Note: McNeil did not respond to an Africa Check email asking who the other agencies were.)

McNeil linked to an opinion piece in Time magazine in which the president of Médecins Sans Frontières (MSF) International, Dr Joanne Liu, and the organisation’s emergency operations manager, Dr Natalie Roberts, described their October 2016 visit to MSF facilities and camps for displaced people in Borno state.

“Today the situation has somewhat improved,” Breuillac added. “The humanitarian response has substantially increased in some areas of Borno and food is distributed in a more consistent way. Added to this, a recent limited harvest has brought some respite.”

That said, Breuillac said MSF remains concerned as many cases of malnutrition continue in Borno’s vulnerable populations. And once the harvest supply has run out, conditions may again deteriorate unless access to food is sustained.

To be sure, many children younger than 5 have needlessly died due to malnutrition and the diseases exacerbated by it. Counting just how many is tricky, though.

“Given the extremely difficult context, and the lack of access by humanitarian actors to a large part of the population of Borno over recent years, it is very difficult to understand the exact mortality rate due to malnutrition,” Breuillac told Africa Check.

A Crisis Info report MSF published in November 2016 showed malaria was the main cause of death in their clinics in Borno state, with malnutrition, measles and pneumococcal disease remaining a concern.

While it claimed there were high death tolls in some camps like Muna Garage and Customs House, only the death toll in Banki – a Borno community on the Cameroon-Nigeria border - was listed in the document.

Breuillac also cited a report by the Famine Early Warning Systems Network. This only stated that “analysis indicates that at least 2,000 famine-related deaths may have occurred in [Borno state's] Bama local government area between January and September, many of them young children".

Africa Check attempted to get figures from Borno state’s health commissioner, Dr Haruna Mshelia, but he did not respond to queries.


Perhaps the strongest refutal to the claim that “almost all children under 5 have died” is that aid agencies plan to assist hundreds of thousands of children under 5 this year in Adamawa, Borno and Yobe states.

The United Nations Office for the Coordination of Humanitarian Affairs in Nigeria, together with 11 international partners, plan to deploy resources to treat moderate acute malnutrition in children older than 6 months and younger than 5 this year.

The plan adds that “about 391,000 under 5 children and 185,500 pregnant and lactating women will be targeted in prioritised areas that are highly food insecure by partners with blanket supplementary feeding".


Conclusion: Situation for children under 5 in Nigeria’s north-east dire, but most have not died


The New York Times tweeted that “almost all” children younger than five in north-eastern Nigeria have died due to the humanitarian emergency caused by the Boko Haram terrorist group.

But the claim is incorrect for several reasons. First, it contradicts the article itself, which stated that it only appeared to be the case in Borno state, one of the 6 states that make up Nigeria’s north-east region.

Secondly, at the end of last year the International Organisation for Migration counted about 467,000 children younger than 5 in camps for displaced people alone. Also, the limited data available on deaths in children under 5 does not back up a near wipe-out of this age group.
Still, the situation for children in this age group remains dire, with a consortium of aid agencies planning to feed nearly 400,000 children in the region this year.