South Africa has seen a “drastic decline in housing delivery over the past six years”, a front-page story in the country's The New Age newspaper declared recently.

The paper was reporting on a speech the minister of human settlements, Lindiwe Sisulu, made at an awards ceremony in Cape Town. Sisulu told the audience: “It is shocking and unbelievable that over the past six years, one of these years being in my time, we have delivered almost half of the number of houses that we delivered at the height of our delivery.”

Has housing delivery dropped over the past six years? And are only half the number of houses being delivered compared to the peak of delivery? Africa Check pulled the numbers.

It is true that state-subsidised housing delivery has declined over the past several financial years, the director of research and advocacy at the Socio-Economic Rights Institute of South Africa (SERI), Lauren Royston, told Africa Check.

The department of human settlements’ data shows housing delivery peaked in 2006/07 when more than 240,000 “housing opportunities” were delivered, comprising 117,845 serviced sites and 153,374 “houses/units”. 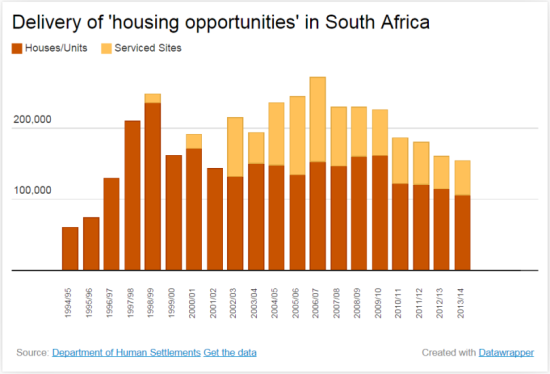 As Africa Check explained in a factsheet on housing in South Africa, a serviced site is a piece of land where people can build their own house. It should be connected to water, electricity and sanitation.

It’s trickier to determine what  a “house/unit” is, as it is unclear exactly what government counts in this category. It could include housing subsidies, the number of houses built, registered deeds or the provision of low-income rental accommodation.

Since the 2006/07 peak, housing delivery has declined. In 2013/14, the latest year for which we have data, just more than 150,000 “housing opportunities” were provided, comprising of 48,193 serviced sites and 105,936 “houses/units”. This represents a 43% reduction in delivery since the peak seven year ago, not six years ago as Sisulu claimed.

Although housing delivery has declined in recent years, the drop is not “as drastic as the 1998/99 to 1999/2000 drop”, professor at the University of the Witwatersrand’s school of architecture and planning, Marie Huchzermeyer, told Africa Check. Over that period, delivery dropped by 35%.

In a forthcoming book, Twenty Years of Freedom, Huchzermeyer and associate professor Aly Karam warn that the department’s housing statistics “have not been independently verified and should be read with caution, as indicative rather than entirely conclusive”.

SERI’s Royston echoed these concerns, saying that “the reported statistics can be hard to access”.

“The imprecise mechanisms that are employed to measure delivery have led to much uncertainty as to how government measures housing delivery,” she explained. “The measurement mechanisms that have been used often mean that it is difficult to measure exactly what has been delivered, and what government is counting.”

Royston said Sisulu and her department should “more carefully monitor the delivery of housing” and “develop more accurate, coherent and transparent statistics about delivery”.

In 2014, Africa Check attempted numerous times to acquire estimates from the department of human settlements on the size of South Africa’s housing backlog. Despite department officials committing to provide the information, it never materialised.

Even if housing delivery were to increase, demand would still remain high due to this backlog, researcher and project leader at the Studies in Poverty and Inequality Institute, Daniel McLaren, told Africa Check.

“Many people have received houses, yes, but many more are still waiting. The worst thing that could happen would be for housing delivery to continue its decline,” said McLaren.

Conclusion: Sisulu is right - according to her department’s statistics

The minister of human settlements’ claim that her department has “delivered almost half of the number of houses that we delivered at the height of our delivery” is correct according to departmental statistics.

However, there are concerns about the statistics. How delivery is monitored and exactly what is counted are unclear. More accurate data is needed for rate of delivery to be precisely assessed.

Mr President, S. Africa is not the only country giving free housing to the poor