South Africa is home to about five million immigrants.

When foreigners became the target of xenophobic attacks in South Africa earlier this year, The New York Times reported on the violence, stating as fact: “With Africa’s most advanced economy, South Africa is home to about five million immigrants.” Many other media organisations such as Reuters, News24, the BBC and the Daily Mail Online also quoted this figure.

We checked the evidence and, in a report in May, found the five million figure to be exaggerated and unsupported by available data. However, when we wrote to The New York Times to seek a correction, Louis Lucero II, assistant to the senior editor for standards, replied saying that the paper was “confident that no correction is required”.

The Times thought the estimate was reasonable, he said: “As can be expected, estimates vary widely - one study by the University of Pretoria estimates the number to be between 2 million and 8 million. Please find the attached paper on the topic, which summarises various estimates.”

Did we miss crucial research in our original report? Was Africa Check the one needing to issue a correction?

Claim based on journal no longer accredited in SA 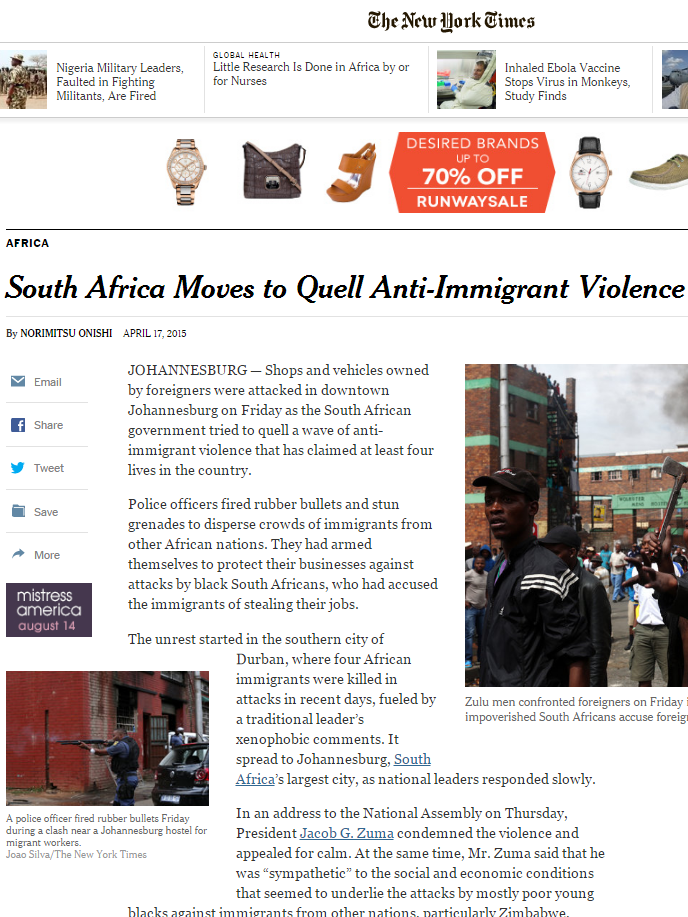 The journal article The New York Times sent us, titled “Factors Determining International Migrants' Involvement in Illegal Trade in South Africa”, was published in September 2014 in the Mediterranean Journal of Social Sciences.

When we investigated, however, we discovered that the South African Department of Higher Education and Training had removed the journal from its list of accredited journals in November last year. This followed allegations that the journal did not meet peer-review standards, accepted plagiarised content and asked payment from academics to have their articles published.

The second alarm bell rang when we discovered that two of the journal authors were facing tender irregularity charges in South Africa, in a separate matter. Oludele Akinloye Akinboade and Mandisa Mokwena are due to stand trial in the Pretoria High Court on 5 October, accused of being involved in corruption, racketeering and fraud.

This is in connection with the irregular awarding of contracts for research and training services at the South African Revenue Service (SARS), which is said to have occurred when Mokwena was working at the tax collection agency between 2007 and 2009.

Estimate in journal was based on media reports

In the meantime – though there was no reference to his work in the article’s bibliography – we tracked down the University of Pretoria (UP) academic whose name appeared in a table summarising immigrant number estimates.

Mike Hough is now an emeritus professor in the politics department of UP.  He said the estimates were not from a study he had conducted but were based on a range of estimates in the media that he summarised in a presentation to a border control conference in March 2011.

Given these problems we submitted the article to Turnitin, a widely used academic plagiarism checker. The results revealed that large sections of the journal article appeared to be copied directly from other sources.

A man holds a placard as he and others attend a silent vigil against xenophobia, held at Constitution Hill in Johannesburg in April 2015. Photo: AFP/STEFAN HEUNIS" />

Both Akinboade and Mokwena denied they had plagiarised any of the article’s content. “If a citation was inaccurately quoted and not acknowledged this would be an oversight and not tantamount to plagiarism,” Mokwena told us.

But media professor and plagiarism expert at the Berlin University of Applied Sciences, Professor Debora Weber-Wulff, rubbished this. At Africa Check’s request, she compared the Turnitin report with the journal article.

“There is a good bit of plagiarised text here,” she told us. “Authors must demarcate the start, end, and source of anything that is not from them… Often [plagiarisers] say that it was not intended. This, too, does not matter - it is still plagiarism.”

Dr Kevin Behrens, a senior lecturer at the University of the Witwatersrand’s Steve Biko Centre for Bioethics who sits on the School of Clinical Medicine’s plagiarism committee, reached the same conclusion.

“It is very obvious that the authors’ intention is to pass off the words of others as their own. This is blatant plagiarism, by definition… given the number of these instances in this article, one can only conclude that the authors were deliberately taking credit for work that was not theirs,” Behrens said.

Africa Check brought the plagiarism to the attention of the Mediterranean Journal of Social Sciences. Dr Lisa Licata, from the journal’s editorial office, told Africa Check that the article “was checked and was found to contain plagiarised content”. The journal has now retracted the article and indicated this on its website.

Louis Jacobs, spokesman of the North-West University where Mokwena is a doctoral student and the article’s third author a professor in the School of Economic Sciences, Wynand Grobler, said the issue would be referred to their Institutional Registrar for consideration.

We sent these findings to The New York Times but haven’t yet received a response.

The journal article also quoted a 2012 Statistics South Africa (Stats SA) report that supposedly stated that there were an estimated five million illegal immigrants in 2011 in South Africa. We checked, but the Stats SA report doesn’t include this estimate.

Executive manager for demography at Stats SA, Diego Iturralde, confirmed this: “There is by no means a report that cites five million illegal immigrants of any sort from Stats SA.”

The agency’s 2011 census found that there were 2,199,871 people living in South Africa who were born outside the country. Iturralde previously told us that the size of South Africa’s immigrant population was unlikely to have changed significantly since then.

To the best of his knowledge, no other research supports a higher number, Loren Landau, former director of the African Centre for Migration and Society at Wits University, told us. He said there are many reasons why inflated immigrant numbers have staying power.

“The first is confirmation bias. As people we best remember ‘facts’ and incidents that confirm what we believe,” he said. “The second has to do with an odd and somewhat ironic alignment of interests. As things now stand, officials, business associations, and even some migrant associations and service providers benefit from these inflated number. Whether it is to justify militarising the border, explaining joblessness, or protecting businesses interests, the more we feel threatened the better.”

When we initially fact-checked the claim made by The New York Times and other media that there are five million immigrants living in South Africa, we found that it was exaggerated and unsupported by available data. In response, the US paper sent us as proof a journal article by local researchers.

That article has now been withdrawn as it was found that the authors had simply copied and pasted large parts of the article from other sources, including apparently a summary of immigrant numbers in media reports - not evidence - by a University of Pretoria academic.

Official South African statistics found that there were 2.2 million foreigners living in South Africa in 2011. While it’s true that many undocumented immigrants may avoid being counted, there is STILL no evidence we have found that this could push the total number of immigrants as high as five million.

In an email sharing our finding with The New York Times, we quoted the Institute for Security Studies on the importance of reporting immigrant numbers correctly.

Consultant Liesl Louw-Vaudran wrote: “In the current debate over xenophobia in South Africa, [exaggerations of immigrant numbers] are extremely dangerous, since they give credence to the belief that South Africa is overrun by foreigners who are stealing local jobs and putting a strain on services."

Are there 70-million people in South Africa? The claim is unsubstantiated

South Africa is home to about five million immigrants.

Are there 70-million people in South Africa? The claim is unsubstantiated