Is Nigeria taking 'all steps' to curb discrimination against women?

Some improvements, but Nigeria's government can do a lot more

Nigerian president Goodluck Jonathan has claimed that his government is committed to reducing discrimination against women and girls.

Speaking last month after meeting Malala Yousafzai, the young Pakistani activist who became a household name after she was attacked by a Taliban gunman in 2012, Jonathan said that his government was “taking steps to curb all forms of discrimination against girls and women”. He added that the government had “also undertaken many affirmative actions” on behalf of women.

Jonathan said women and girls make up “about 50% of our population” and that “we will be depriving ourselves of half our available human resources if we fail to educate girls adequately or suppress their ambitions in any way”.

The Nigerian leader’s comments came amid rising public criticism of government’s handling of the kidnapping of more than 200 secondary schoolgirls by the Islamist insurgent group  Boko Haram in the country’s largely Muslim northeast.

It is a place where many girls do not finish high school. According to the country’s examination board, only 36.3% of pupils in the northeast who wrote final exams in 2010 were girls.  (See table on page 8).

So what have Jonathan and his government done to curb discrimination against women and give girls better access to education? And is he right to say that they are “taking all steps” to do so?

More girls are enrolling in school and more women appointed… 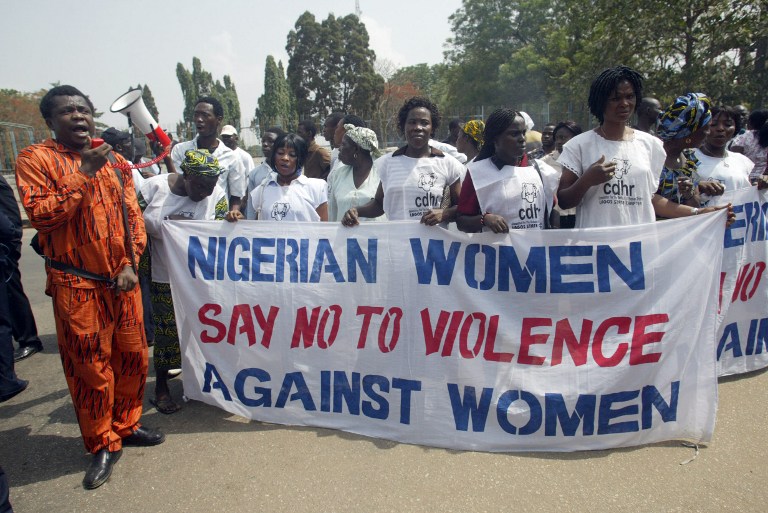 The national ratio of girls to boys in secondary school increased from 79.9% in 2008 to 88% in 2012, according to the Nigeria 2013 Millennium Development Goals Report.

The government’s target is to ensure that there are as many girls as boys in school by 2015.

There has also been some progress on the affirmative action front. Two years ago, the president appointed a woman, Aloma Maryam Mukhtar, as Chief Justice. In line with the 2006 National Gender Policy , which recommended that 35% of government posts be filled by women,  Jonathan’s government claims to have reached 33% in federal appointments at executive level by May 2013.

Less quantifiable forms of discrimination are, however, far more difficult to tackle and have been neglected. The government states that “patriarchy, deep-rooted traditional beliefs and customs and a low level of female participation” are contributing “immensely to the perpetuation of gender inequality in the country.”

Early marriage, pregnancy and widespread poverty still prevent many girls from progressing from primary to secondary school, especially in the country’s north.

According to UNICEF, 39% of Nigerian women marry before they reach 18, and 19.6% marry by age 15. Marriage reduces the chances that a 15 to 19 year-old girl will go to school by up to 67%, according to the Population Council.

Technically, the 2003 Child Rights Act criminalises marriage below 18, but it has not been adopted by state governments in much of the country's north. Jonathan’s government has not pushed any further policies to address the problem of girl marriage, implying that it is not addressing “all forms” of discrimination surrounding education, as claimed. 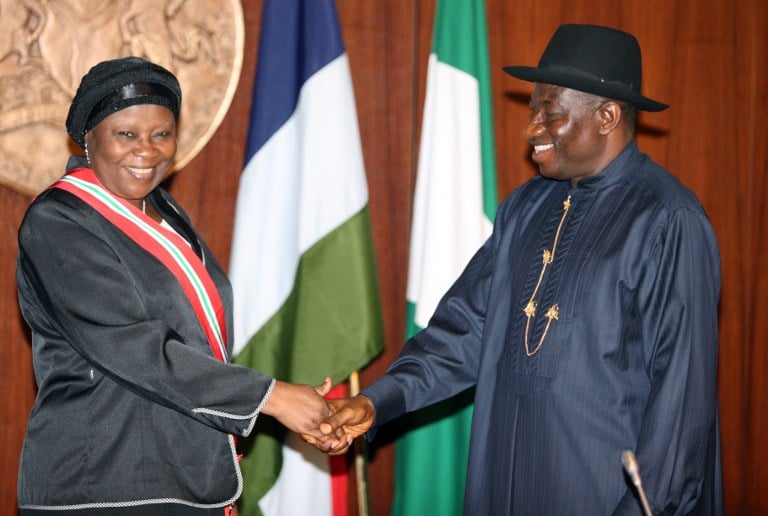 The president has also kept silent in high-profile cases of gender discrimination and child marriage.

Last year, Senator Ahmed Sani Yerima blocked an attempt to amend an article of the constitution that says girls below 18 are considered adults if they are married. Yerima, a former governor of the northwestern state of Zamfara, himself married an underage Egyptian girl and has been an advocate of child marriage, appearing on Channels TV and Al-Jazeera to defend the practice considered by the United Nations as a violation of human rights. The Presidency has remained silent about his comments.

With respect to the kidnapped girls, Jonathan spoke out against mass abductions only after facing international pressure to react, and has remained quiet as more abductions of girls and women have been revealed.

A mixed record on justice and property

There are also concerns about discrimination against women in the justice system and in property ownership.

In some customary law marriages, for example, a  woman may not own property as she is herself considered to be her husband's property, and this has not been addressed. As a result of this and other issues, according to a 2006 National Bureau of Statistics survey, just 7.2% of women owned land, compared to 38.1 percent of men. Women, the survey found, own less than 24% of the land in Nigeria.

In 2010, the Federal Ministry of Works Housing and Urban Development did take some action, announcing a Women’s Housing Plan Initiative to provide support for women who wanted to own their homes. However, from the evidence on the initiative’s website, it appears to be focused on the capital city Abuja known for its high real estate valuations.

Women also experience discrimination in the Islamic legal system, prevalent in much of the north, where the value of their evidence, and that given by non-Muslims, is accorded less weight in sharia courts. And Jonathan's government has done nothing to tackle this anomaly.

Conclusion - Government could do much more

Overall, Nigeria’s ranking in terms of its gender gap has improved according to the 2013 Global Gender Gap Report. The education gap between girls and boys has also narrowed. But, despite that progress, the report notes that gender parity in secondary school enrolment fell in 2012 and that the number of girls in classrooms, relative to boys, had reduced. So, while the trend is generally improving, the latest available data shows that, in 2012 at least, gains in education saw reversals.

These fragile gains come against the backdrop of a legal framework that is struggling to modernise itself. Pro-equality bills such as the Gender and Equal Opportunity Bill, which domesticates parts of CEDAW, the Violence Against Persons Bill, which reviews the ambiguous definition of rape that has allowed rapists to walk free, are stuck in deliberation in the National Assembly. The Child Rights Act of 2003 has not been adopted by the states where it would make the most difference.

And discrimination against women in parts of the justice system has not been tackled at all. So while it is fair to say that the education gap is closing between boys and girls, and that the government has taken some “affirmative action” on women’s behalf, the government is not “taking steps to curb all forms of discrimination against girls and women”.

Some improvements, but Nigeria's government can do a lot more