The emir of Kano state claimed there are high levels of illiteracy and early marriage amongst young Nigerian girls, we checked the facts.

A vocal Nigerian Islamic ruler told elites from the country’s northern region earlier this year to stop building mosques and rather channel resources to educating girls and discourage early marriages.

Punch newspaper reported the emir of Kano, Muhammadu Sanusi II, told delegates at a conference: “I’m just tired of people coming to me to say I want to build a new mosque. You know, we keep building mosques and our daughters are illiterates.”

Sanusi reportedly added that high levels of illiteracy, early marriage, divorce and the domestic violence in this region of Nigeria are “not a mere coincidence”.

Africa Check pored over two claims the emir made about the share of girls married before their 18th birthday and the risk pregnancy holds at a very young age. 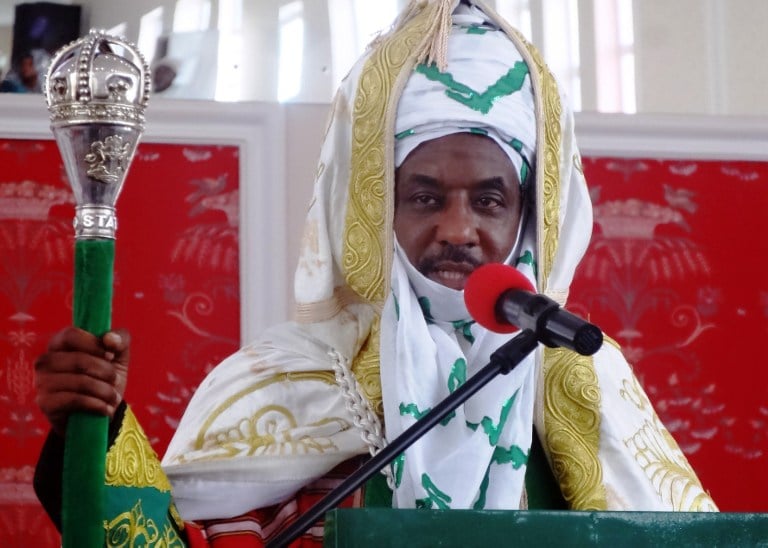 The emir of Kano, Muhammadu Sanusi II, speaks at his coronation as the 57th emir of the ancient Kano emirate in February 2015. Photo: AFP/AMINU ABUBAKAR" />

Sanusi told Africa Check by email that he meant the girls in this age group “were married off when they were adolescents below 18”. He added that he was specifically referring to the northeastern and northwestern part of northern Nigerian.

The emir forwarded Africa Check the document on which he said he had based this claim, called “Education for the girl child in Northern Nigeria”. It’s not clear who compiled it.

The document stated that more than half of the women in the northeast and northwest were married off before the age of 16, referencing the country’s 2008 Demographic and Health Survey.

However, this figure refers to women between 20 and 49. In surveys such as these, respondents are divided into five year age brackets. Girls in the age group 15 to 19 can’t yet answer whether they were first married by age 18, as many of them are still to turn 18. (Note: For this reason, the UN resorts to the 20-24 age group when reporting on child marriage.)

Though there isn’t data available for the group the emir was talking about – girls aged 18 and 19 in Nigeria’s northeast and northwest – the available data point to the claim being correct.

The emir provided Africa Check with a briefing note on the health risks associated with teenage pregnancies.

It cited a 2012 United Nations Population Fund factsheet, which in turn referenced a trends in maternal mortality report compiled by the World Health Organisation (WHO) and other international bodies.

However, the WHO report does not mention a five-fold increase in risk.

Africa Check asked the UN Population Fund for proof of the statistic. The organisation’s communication specialist for youth and population, Eddie Wright, relayed comment from members of their technical division.

“Our technical experts wish to stress that most sources of maternal mortality rates have substantial biases or uncertainties, as in general, it is hard to measure,” Wright wrote. “But [the rate for women] under age 15 is particularly difficult - first because births below 15 are less common and the locations where pregnancies at this age are more likely to occur are also locations where all records of such events are less reliable.”

Given that “sound data are hard to secure” the organisation relies on two studies, in particular, Wright added.

The first is a study based on data collected in the late 1960s in a rural Bangladesh county, which showed a death rate for mothers aged 10 to 14 that was 4.7 higher than for those aged 20 to 24.

The second was a hospital-based study carried out in several Latin American countries between 1985 and 2003. The results indicated a 4 time higher risk for teen mothers younger than 15 compared to those in the 20-24 age group.

A University of Southampton lecturer with interests in maternal health in low and middle-income countries, Dr Sarah Neal, co-authored a study in The Lancet reviewing maternal mortality rates in 144 countries.

“It used to be believed that all adolescents were at very increased risk of maternal mortality,” she told Africa Check. However, this study and another she co-authored suggested “the risks are not as great or universal as previously believed”.

Neal is currently systematically reviewing the studies to estimate how the risk differs for younger teenagers. (Note: We will update the report once her findings are released.)

“Data from large-scale studies in Africa are limited, but I think research certainly consistently suggests the risk for young adolescents are marked higher than for older adolescents or women in their 20s,” she said.

“I would be reluctant to put a figure on how much more of a risk it is though based on the data available and the fact it may well vary regionally.

We therefore rate this claim unproven until better data are available.