Facebook message claims that universities are no longer accepting current matric students due to leak of exam papers, we checked the claims.

South African final-year high school students will have to rewrite their exams due to leaks.

Education officials said this claim was false, while universities confirmed they are still considering offers.

Facebook (November 2020)
This article is more than 1 year old

“I was watching CNN news today and they said that the matric class of 2020 will rewrite all their exams in January due to the Leaking of papers disorder,” begins a message posted on Facebook on 25 November 2020.

The message claims that the basic education department found that all matriculants – final-year high school students – will have to rewrite their school-leaving exams in January, after several papers were leaked.

“This is above the department of Education capacity.”

The message also says that universities are no longer accepting current matric students, because of the leaks. It adds that Wits University, the University of Johannesburg and University of Pretoria have changed the application status for current matriculants from “firm offer” to “not considered”.

“That's the reason to why Everything is slow and to why...other Varsities not issuing Acceptance letters,” the message says. 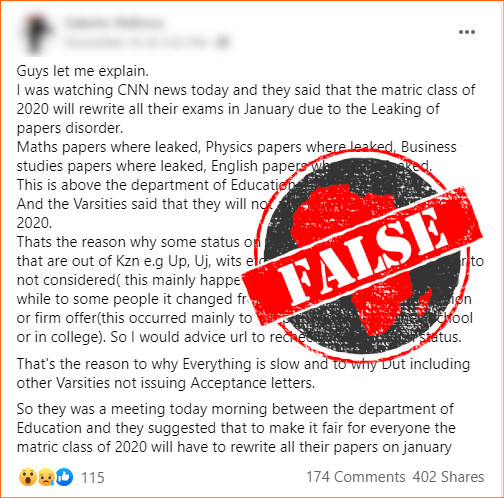 It’s been viewed more than 111,300 times since it was published.

Some matric exams – for maths, physical science and life sciences – were leaked days apart in late November. The maths paper was leaked in eight out of nine of South Africa’s provinces just hours before the exam was written. So far, one person has been arrested in connection with the leaked maths paper.

Did the basic education department announce that all 2020 matric exams must be rewritten in January? And have universities stopped accepting current matric students because of the leaks? We checked.

The post attributes the claim to a report by CNN, the US TV news network. We could find no evidence that such a report exists.

Africa Check asked the department of basic education about the Facebook post. Spokesperson Elijah Mhlanga said it was “fake news”.

He added that when the papers were leaked, investigations were conducted and determinations made on a case-by-case basis.

“In a case of a large-scale situation where a leak has taken place and a lot of people have received it, two things become important,” Mhlanga said.

There are no plans to force the entire matric 2020 class to rewrite all their exams.

But have the leaks led to universities no longer accepting current matriculants for their 2021 intake and rescinding offers from candidates they have already accepted?

Africa Check asked Wits University, the University of Pretoria and University of Johannesburg about the message. All three confirmed that the claims were false.

Wits University head of communications Shirona Patel told Africa Check that it was “absolutely not true” that Wits had rescinded offers for 2020 matrics.

“Final offers only go out once their final matric results are received,” Patel said.

Thembi Tlale, deputy director of marketing and communications at the University of Pretoria, told us that matric students were given “conditional offers” before exams were written, and not final offers.

“We make conditional offers based on grade 11 results for undergraduate studies. So no offer was rescinded based on the leaked NSC exam papers,” Tlale said.

Conclusion: No truth to claims of a national rewrite, or of varsities taking back offers

Current matriculants will not be forced to rewrite all exams in January 2021, as a result of the leak of several exam papers. The leaks have also not caused universities to rescind offers, or stop considering applications.

Conditional offers based on grade 11 results and firm offers are only given once matric results are released.

South African final-year high school students will have to rewrite their exams due to leaks.

Education officials said this claim was false, while universities confirmed they are still considering offers.