Concerns about a lack of oxygen could lead people to seek alternative and unproven treatment. Instead, get medical help if you have low oxygen levels.

No scientific evidence supports the claim, and the product could have dangerous side effects.

A video with more than 2 million views on Facebook claims that Mega Oxygen can boost your oxygen levels.

It’s the “flagship product” of a company called Oxygen Products, which describes it as “a natural systemic blood oxygenator” and the “secret to healing the coronavirus”.

In the 22-minute video, people talk about how they were sick with Covid-19 and took Mega Oxygen. Many of them attribute their recovery to the product.

South Africa is currently experiencing its third wave of Covid-19 infections. The government and advocacy organisations have raised alarm about a shortage of oxygen and oxygen delivery equipment for patients.

Concerns about a lack of oxygen could lead people to seek alternative treatment. But medical experts told Africa Check the claims about the product were false and its ingredients could be dangerous. 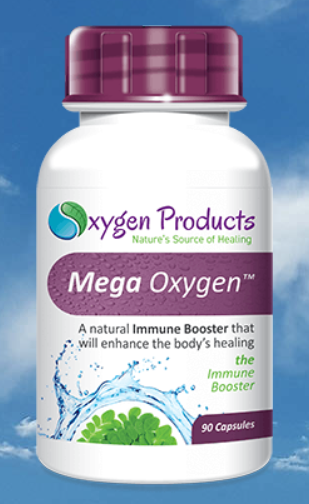 The Oxygen Products website advises: “When Mega Oxygen is taken with water, the capsule shells break down in the digestive system exposing the contents to water. Magnesium peroxide; once in contact with water, releases oxygen at a controlled rate.”

Pharmaceutical sciences professor Mahmoud Soliman, head of the molecular bio-computation and drug design laboratory at South Africa’s University of KwaZulu-Natal, warned that the capsules could be dangerous. He said there was not enough research into the safety and long-term effects of magnesium peroxide.

Soliman directed Africa Check to a product safety summary which warned that “magnesium peroxide can cause numerous adverse effects including: bloating, belching, abdominal pain, irritation of the mouth and throat, nausea, vomiting and diarrhoea”.

In the video, a woman says she feels “nauseous” after taking the capsule. “When I eat then it felt like I was going to the toilet.”

An article in the journal of Basic and Clinical Pharmacology and Toxicology found that “iron supplements and magnesium peroxide is a hazardous combination”.

Soliman backed this up. “If the proposed formulation was taken with supplements or meals that have iron, dangerous reactive free radicals will be produced,” he said. He added that this “messes up the normal gastric pH”.

‘This is a nonsense product’

Many people in the video claim that their recovery from Covid-19 was due to Mega Oxygen. One man says in Afrikaans: “Hoekom ek oorleef, is as gevolg van oxygen.” This translates as: “The reason I survived is because of oxygen”.

But Prof Guy Richards, head of the intensive care unit at the University of the Witwatersrand in Johannesburg, described the testimonies as “anecdotal reports”.

“We don’t even know if they had Covid-19, and the vast majority do have it get better anyway,” he said.

“This is a nonsense product. It’s the ‘chicken soup theory’. It is comforting to believe that something readily available will cure you.”

“None of these ingredients can do anything to increase oxygen levels in the blood,” said Richards. He explained that oxygen is delivered to the body by haemoglobin, an oxygen-carrying protein, in the blood.

According to Janet Diaz, the World Health Organization’s clinical management team leader, Covid-19 can lower oxygen levels in the body. This can cause cells in the body to malfunction and die.

When this happens a patient will require “life-saving” medical oxygen. This oxygen is taken from the air and concentrated, often in a cylinder. Patients receive medical oxygen through face masks or tubes in the nose or windpipe.

Madhi said you should immediately seek medical assistance if you experience any of these symptoms, start feeling dizzy or take “more than 20 breaths per minute”.

A video on Facebook claims that Mega Oxygen, with magnesium peroxide as an ingredient, boosts oxygen levels in the body and heals Covid-19.

But medical experts said scientific evidence did not support the claim. They warned that the capsules could have dangerous side-effects, especially if they are taken with other supplements.

We rate this claim as incorrect.

Correction: A previous version of this report stated that Prof Mahmoud Soliman was the dean of health sciences at the University of KwaZulu-Natal. He is the head of the molecular bio-computation and drug design laboratory. We apologise for the error.

No scientific evidence supports the claim, and the product could have dangerous side effects.

To mark International Fact-Checking Day on 2 April, we have updated our handy guide to help you sift out the real from the dodge when it com...