No, there is no ‘miracle recipe’ that cures diabetes

“Dr Jaime Dy-Liacco has finally found a remedy for diabetes […] He created a mixture containing the minerals required to fight against diabetes. The ingredients: 12 pieces of sweet pepper, 2 raw eggs, ½ teaspoon of sea salt,” an online Senegalese newspaper recently reported.

“Dice and crush the peppers in order to combine them with the eggs. Then add ½ a teaspoon of sea salt. Lo and behold, your remedy is ready and you can drink it,” the publication added. It was relaying an article published by protegetasante.net, a news site which claims to provide natural methods for curing oneself.

Is it possible to be cured of diabetes using such a recipe? We checked.

What proof is there? 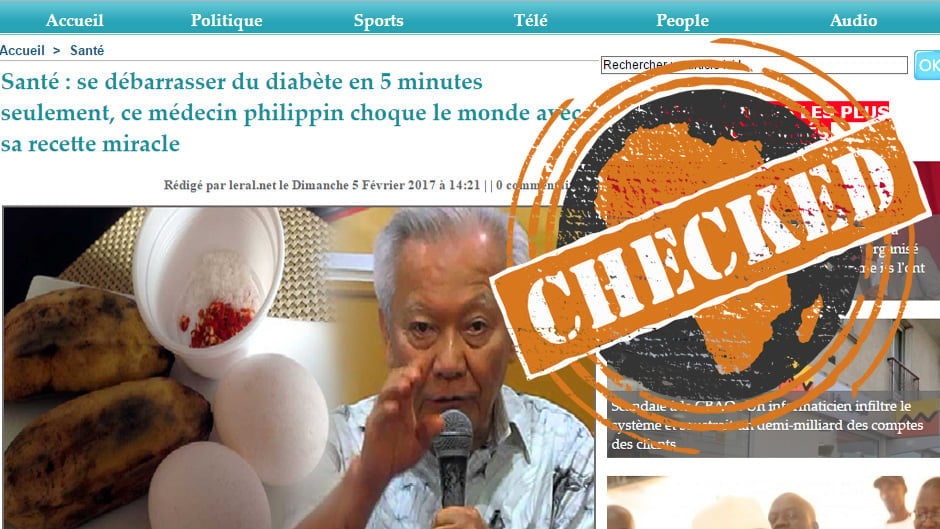 We found a video on YouTube in which Dy-Liacco talks about his recipe that “cures diabetes in five minutes”, but were unable to find his contact details to request proof of this claim.

Africa Check also tried in vain to get in touch with the department of health of the Philippines. However, its website does not contain any information about Dy-Liacco or his anti-diabetes recipe.

He also has not published anything in a scientific journal, Dr Gojka Roglic from the World Health Organisation’s department for management of noncommunicable diseases, disability, violence and injury prevention, told Africa Check.

“I couldn’t find any trace of a scientific evaluation of this ‘miraculous’ solution for curing diabetes,” Roglic said.

“There’s nothing more to say. No trace of any scientific proof.”

‘Be careful of fortune tellers’

Director of the Mark Sankalé Diabetes Centre in Dakar, Professor Seydou Nourou Diop, told Africa Check he has not heard about such a cure.

“If he says so, maybe it’s true for him. However, be careful of fortune tellers. The truth of this assertion can’t be proven by one patient who has been cured in a year, but by 1,000 patients cured over the same period, for example.”

Diop pointed out that “rarely a month goes by without at least one congress or meeting on diabetes taking place around the world. So if it were as easy as that [to cure diabetes] we’d be aware of it.”

“You cannot treat something that you don’t understand. This is a chronic disease which springs from a genetic disposition. Today we still do not know what it is that triggers the disease at a specific moment. This is not the first time, and it probably won’t be the last, that someone claims something like this,” he emphasised.

The director of the department of diabetology, endocrinology and metabolic disorders of the Paris Saint-Joseph Hospital in France, Dr Dominique Huet, unequivocally refutes this claim.

“The answer to your question is no! There is, to date, no cure for this disease which is a chronic disorder. Every six months someone presents a new plant or a new miracle treatment [for diabetes].

“But until now, no treatment – even the sophisticated treatments of medical science – has succeeded in curing a single case of diabetes," Huet told Africa Check.

The diabetologist added that “if it were true and scientifically proven, we’d know about it and we’d naturally administer it, because we’re obviously searching everywhere for ways and means of finding a treatment that would make diabetes disappear […] and for now, it doesn’t exist.”

“To say that a combination of stuff can cure diabetes in 5 minutes is utter nonsense. I find all this charlatanism and giving false hope to patients dangerous,” he added.

Conclusion: the effectiveness of Dr Dy-Liacco’s recipe is not scientifically proven

Diabetes is a major public health concern. Around the world, 422 million adults were living with the disease in 2014, WHO figures showed.

A Phillipine doctor nevertheless claims that he has created a recipe – consisting of sweet peppers, eggs and sea salt – which eliminates diabetes “in 5 minutes”.

We were unable to track down the doctor, Jaime Dy-Liacco. However, the diabetologists we contacted declared that they were unaware of this cure. In fact, they refuted it, saying that if this recipe had been proven, it would have been known.

Moreover, a WHO specialist told Africa Check there is no scientific proof that this method is effective.

To conclude, the WHO recommends “healthy eating habits, regular physical activity, maintaining normal body weight and no smoking” to reduce the burden of this disease which, for now, remains incurable.

Edited by Assane Diagne. Translated by Hannelise Brand. The original French version of this report can be read here.