Following a cooling of relations between former Nairobi governor Mike Sonko and president Uhuru Kenyatta, Sonko took to social media to list his own achievements and the president’s flaws. He however inflated public debt.

Analysts say Kenya’s level of public debt is concerning, but data shows it's not over KSh8 trillion as Sonko claimed on social media.

Ousted Nairobi governor Mike Sonko took to social media in January 2021 to defend his record in office, giving a lengthy list of his supposed achievements.

Kenyan president Uhuru Kenyatta in turn, Sonko said, had little to show for his term in office. The two former allies have in recent months fallen out politically.

“Despite borrowing over KSh8 trillion in the last eight years, what does the president have to show apart from unprecedented unemployment, poverty and hopelessness in millions of Kenyans?” Sonko asked.

The statement was shared to his Facebook and Twitter accounts, on which he has 2.3 million and 1.3 million followers respectively.

Kenyatta’s administration took office in April 2013. Has it borrowed the equivalent of US$72.7 billion since? We checked.

Debt as of June 2020 at KSh4.8 trillion according to Treasury

We reached out to the former governor for the source of his figures and will update this report should we hear back.

The best source to check the country’s debt is the public debt register, James Muraguri, the chief executive of the Institute of Public Finance Kenya, told Africa Check.

However, the most recent publicly available version from the national treasury only documents external public debt as of 30 June 2018. Public debt comprises both domestic and external debt.

As an alternative, Muraguri suggested we look at the annual debt reports that the treasury regularly submits to the national assembly.

These report what the country borrows every year, John Kinuthia, of the public finance thinktank International Budget Partnership-Kenya, told Africa Check. In October he co-authored a policy brief on Kenya’s public debt, citing data from the debt reports. 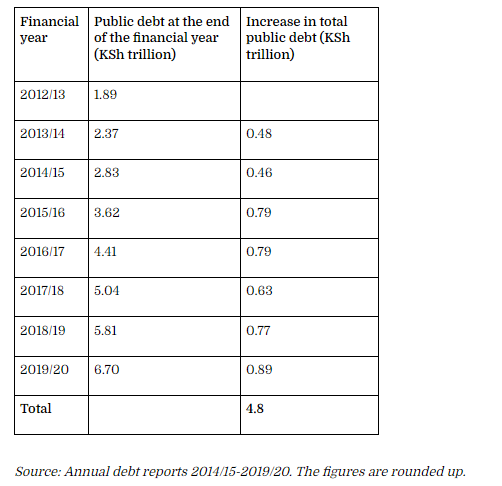 The change in the total public debt [right column of table] reflects the net increase in borrowing, Mohamed Wehliye told Africa Check. He works as a senior advisor to the Saudi Arabian Monetary Authority, the Saudi central bank, and has written widely about Kenya’s rising public debt.

For the seven financial years that we have data on, which cover nearly all of Kenyatta’s tenure, his administration borrowed KSh4.8 trillion.

Kenya’s public debt is never too far from the national conversation, with lawmakers now said to be concerned.

President Uhuru Kenyatta’s administration has defended borrowing as investing for future benefit. Kenyatta has in recent months been at the forefront of an African campaign for debt relief because of the Covid-19 pandemic. Reporting in January 2021 shows his government successfully pleaded with developed country creditors for more time, while similar talks with China are on.

But analysts say it is difficult to track where borrowed money is spent.

“Generally, the budget does not provide details of the total debt received each year nor on the recipient ministries,” an October 2020 report by the International Budget Partnership-Kenya noted.

One of the report authors, John Kinuthia, told Africa Check that more transparency in the government’s reporting on public debt and how it is spent is needed. The constitution requires money be borrowed only for development projects.

James Muraguri, the chief executive of the Institute of Public Finance Kenya, told Africa Check that while some of the debt has funded infrastructure such as rail and electricity, some of it is channelled into “budgetary support”. Tracking loan expenditure in the budget is difficult.

The government was spending the bulk of its revenue in debt repayment and not on service delivery, he said. “While the government has not defaulted in the debt repayment, it is defaulting to the citizens,” Muraguri said. “The economic matrix may look alright, but the social matrix is not.”

However, data from the national treasury and the country’s central bank show that between April 2013, when Kenyatta’s administration took office, and November 2020, the most recent data available, the public debt rose by KSh5.46 trillion.

Sonko is therefore wrong on this count. But this is unlikely to allay public fears that the country’s debt managers are walking a tightrope.

Analysts say Kenya’s level of public debt is concerning, but data shows it's not over KSh8 trillion as Sonko claimed on social media.

Did Kenya spend all borrowed money on development as Kenyatta said? Not quite

How Kenyatta mangled his numbers on Kenyan counties’ development spend