South Africa holds municipal elections on 1 November 2021. We take a look at claims made in the Democratic Alliance’s election manifesto about the party’s achievements and challenges faced elsewhere.

In the upcoming municipal elections South African citizens will elect representatives for district, metropolitan and local municipal councils across the country’s nine provinces.

The Democratic Alliance (DA) is the largest opposition party in South Africa. It won a majority in 19 municipalities in the 2016 municipal elections and governs South Africa’s legislative capital of Cape Town.

The DA’s election manifesto is titled: “A record of action, and a promise of more.” In this report we fact-check key claims the party made about clean audits, load-shedding, water loss, sewage systems, streetlights and unemployment.

“For the 2019/20 financial year, 18 of the Western Cape’s 30 municipalities were awarded clean audits and they were all governed by the DA.” 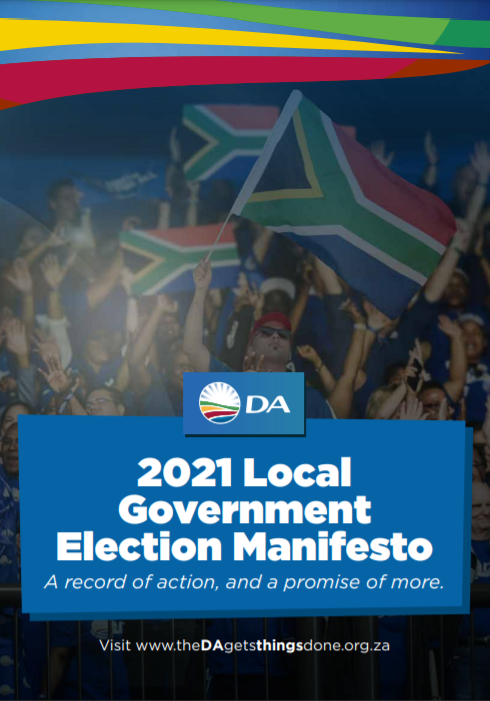 The Western Cape is one of nine provinces in South Africa and the only one governed by the DA.

But AGSA senior manager of media relations and communications, Africa Boso, told us that during this period “the Western Cape had 19 municipalities with clean audits”.

An institution gets a clean audit when its “financial statements are unqualified with no material audit findings in its reporting on predetermined objectives” and when it complies with legislation, said Boso.

Of the 19 Western Cape municipalities with clean audits, the DA’s website states that 17 are currently governed by the DA. However, the party was ousted from control in Central Karoo District and Prince Albert shortly after the 2019/20 financial year ended.

“If you live in DA-run Cape Town, you already experience fewer blackouts. The Steenbras Hydro-electrical Power Scheme has reduced load shedding times compared to municipalities not run by the DA.”

Cape Town is a city and port in the Western Cape province. Upper Steenbras dam in Cape Town has a 160 megawatt hydro-pump station with four turbines that is used to generate electricity.

Ngwenya sent us a link to the City of Cape Town’s website which says that the Steenbras pump station “has successfully offset load-shedding in Cape Town during the lower stages, e.g. stages 1 and 2, for most City-supplied residents”.

“Most City customers will likely continue to be protected from stage 1 and 2 of Eskom’s load-shedding.”

The city’s director of energy generation and distribution and energy and climate change directorate, Dr Les Rencontré, confirmed this: “Where possible the city uses its own generation to generate in lieu of load-shedding for the benefit of customers in the city’s area of supply.”

Cape Town avoided one stage of load shedding for four hours in July 2021 and 97 hours in June 2021 because of the Steenbras power station, said Rencontré.

But Chris Yelland, an energy analyst at electricity and energy consultancy firm EE Business Intelligence, has criticised the DA for making this claim.

“I really resent the electioneering and party politicization of electricity through the false and misleading messaging,” Yelland tweeted in response to a video shared on Twitter of DA national leader John Steenhuisen making a similar statement.

“Steenbras pumped storage scheme has been operating since 1979. Its conception, design, construction & operation has nothing to do with the DA,” Yelland said in a second tweet.

Prof Anton Eberhard, director of the power futures lab at University of Cape Town's Graduate School of Business, agreed with Yelland but added that “the City of Cape Town, under the DA, has recently refurbished the turbines and undertaken necessary maintenance to keep this plant going”.

The DA compared this statistic to water loss in the Drakenstein municipality which it said was “one of the lowest in South Africa” at 16.92%.

Drakenstein municipality is DA-run and within the Cape Winelands district municipality, northeast of Cape Town.

DA head of policy Gwen Ngwenya referred us to the Drakenstein municipality 2019/2020 annual report which does record that 16.92% of water was lost during this period.

But we could not find any data to verify that this is one of the lowest municipal averages of water loss. Although a parliamentary response gave the volume of loss per municipality, it did not give the percentage of loss.

Most recent data puts the average at 41%

But does South Africa’s average water loss stand at 37%? Ngwenya said the figure came from a “widely cited 2012 report”.

This report studied water loss at 132 out of 237 municipalities in South Africa, and was submitted to the Water Research Commission by water engineering firm WRP.

But in 2017 Africa Check found that there was no conclusive data on how much water South African municipalities lost.

The department of water and sanitation did not respond to our request for information.

The DA’s Ngwenya told Africa Check that the figures have been “cited by a variety of sources” including in articles by media outlets Business Day and Mail & Guardian, and a legal brief.

The statistic comes from a department of water and sanitation 2014 green drop process report. This report measured the performance of waste water service organisations.

But these figures are for 2013. Since then, the department has not released a green drop report to the public, although the 2016/17 results were released to municipalities. We asked the department for this report but have had no response.

The department was reprimanded in October 2018 by parliament’s portfolio committee on water and sanitation for its “laxity” in publishing reports.

“It is unacceptable that the 2016 reports are still in draft stage in 2018. We are of the view that department officials are getting paid for doing nothing,” said committee chairperson Mlungisi Johnson.

In July 2021 the department announced the reinstatement of the green drop programmes. It plans to conduct a full audit in 2021.

“After just six short months of being back in office in Tshwane the DA administration had repaired 75,000 streetlights.”

“The DA got back into office in November 2020,” said Ngwenya. “The 75,000 figure over 6 months in fact understates the true picture because at the time when we received the information it had not yet been consolidated.”

The report showed that 144,708 streetlights were restored from January to June 2021.

The most recent Tshwane municipality annual report was for 2019/20. That year the city reported repairing 80,000 streetlights. We will update this report when the 2020/21 annual report is published.

“In ANC-run Mangaung, over R670 million worth of clean drinking water was lost within three months due to leaks and burst pipes that were not attended to.”

Mangaung municipality is located in Bloemfontein, the capital city of the Free State province and South Africa’s judicial capital. It is one of eight metropolitan municipalities in South Africa.

The party’s head of policy, Gwen Ngwenya, referred us to Johann Coetzee, lead specialist for governance at the DA. He said the claim was incorrect.

“We have determined that an error occurred in the manifesto around the fact referring to the value of Mangaung’s water losses,” he said.

South Africa’s national treasury releases reports on the state of local government finances and financial management publications. They include the cost of water loss for each of the eight metropolitan municipalities in South Africa, including Mangaung.

The most recent available release was for 2018/19, but the treasury sent us all the data it had. “There is no evidence in our records showing that Mangaung Metro has lost clean drinking water in excess of R670 million within 3 months,” the treasury confirmed.

“Mangaung Metro is experiencing regular water losses due to weary water pipes that frequently burst and are leaky as a result of poor maintenance of water infrastructure,” said treasury.

The “metro was placed under a mandatory provincial intervention by the Free State provincial government on 19 December 2019” but it was “taking corrective actions to address the shortcomings, through the implementation of the mandatory financial recovery plan”.

“At 29.1%, the Western Cape continues to have the lowest expanded unemployment rate in South Africa ...”

The DA’s manifesto attributes this claim to the “most recent Stats SA Quarterly Labour Force Survey (QLFS) released in August 2021”. The data covers the period April to June 2021.

The Eastern Cape had the highest expanded unemployment rate, at 53%.

The world needs facts. We need you!