After South Africa suspended the Johnson & Johnson vaccine, the Economic Freedom Fighters urged “better” jab options. But there really is no need to compare.

Russian and Chinese vaccines have “up to this point ... proven to be of better efficacy than Euro-American vaccines”.

Although an expert said two mRNA vaccines developed in Germany and the US had the highest efficacy, there’s little point in this kind of comparison.

Countries around the world have been racing to vaccinate their populations against Covid-19. South Africa’s programme started on 17 February 2021. By 10 May, it had vaccinated 395,230 people or 0.7% of its population.

But in April, South Africa suspended the rollout of the Johnson & Johnson vaccine. This was due to a joint advisory by the US Food and Drug Administration and Centers for Disease Control that detailed six cases of blood clotting in women who had received the vaccine.

In response, South African political party the Economic Freedom Fighters issued a statement calling for the government to look at alternatives.

“We urge the South African government to consider the Russian and Chinese vaccines, which up to this point, have proven to be of better efficacy than Euro-American vaccines,” the statement ended.

Was the party right? We checked.

A vaccine is a type of preventative medicine that trains the immune system to create antibodies in order to build resistance to specific infections. Most are administered through injection.

Companies that have produced vaccines in Europe and America include: Moderna (US), Pfizer-BioNTech (Germany), AstraZeneca (UK), Johnson & Johnson (US) and Novavax (US).

Companies that have produced vaccines in China and Russia include: Sinopharm (China), Sinovax (China) and Gamaleya (Russia).

For a vaccine to be approved in South Africa, the South African Health Products Regulatory Authority requires the efficacy to be at least 50%. This is in line with global health standards set by the World Health Organization (WHO).

Dr Lee Hampton, a paediatrician and medical epidemiologist with the Vaccine Alliance, said in an interview with the WHO that vaccine efficacy referred to a “vaccine’s protection against a disease/pathogen in a vaccine trial”.

“If a vaccine has, for example, 70% efficacy, it means a person vaccinated in a clinical trial is around two-thirds less likely to develop the disease than someone in the trial who didn’t get the vaccine.”

Prof Salim Abdool Karim is the director of the Centre for the Aids Programme of Research in South Africa (Caprisa) and has recently been appointed to the WHO’s Science Council.

He told Africa Check that the vaccines with the highest efficacy were the two mRNA vaccines: Germany’s Pfizer-BioNTech and Moderna from the US. (Note: mRNA vaccines fight diseases by teaching the immune system how to respond to viruses and bacteria. Watch this video to learn more.)

“There are no other Covid-19 vaccines that compare with these two vaccines. All other vaccines, including those developed in Russia and China, have lower levels of efficacy for any symptomatic infections,” Karim said.

China’s Bio-New Crown Vaccine by Sinopharm has shown 79.3% efficacy against Covid-19 and 100% efficacy against moderate and severe Covid-19. (Note: This study has not been published in a peer-reviewed journal.)

‘No need to compare’ vaccines

Despite the differences in efficacy, medical experts and researchers caution against comparing the vaccines. This is because, according to Hampton, the efficacy data is not designed to be compared.

“Clinical trials are set up differently and measure different things. All clinical trials provide rigorous data, but it makes it much harder to do direct comparisons between vaccines,” he explained.

“For this you’d need a head-to-head trial, with the same protocol for all the vaccines, delivered and tracked in the same way.”

A number of variables can influence the results, including what is considered a Covid-19 case, the study population and statistical methods for efficacy.

Hampton said available data showed that all the vaccines offered better protection against severe illness than symptomatic illness. Given the risks of Covid, he said, he would still advise patients to take vaccines with slightly lower efficacies.

Karim added that there was no need to compare the vaccines.

“The level of difference is not really meaningful as these are all highly efficacious,” he said. “There is no need to compare the Russian and Chinese vaccines to other vaccines as their efficacy data speak for themselves that the vaccines from these two countries are very good vaccines.”

Comparisons of vaccine efficacy are further complicated by the 501Y.V2 variant of Covid-19 discovered in South Africa in December 2020.

Prof Hassan Mahomed, a public medicine specialist at the Stellenbosch University Division of Health Systems and Public Health and at the Western Cape provincial department of health, said more research was required to understand the vaccines’ efficacy in a local setting.

At this stage, few vaccines have released data about their efficacy against the 501Y.V2 variant. Pfizer reported that a small study of 800 people showed that their “vaccine was 100% effective in preventing Covid-19 cases in South Africa''.

Moderna is currently undertaking trials with the South African variant, following early results that suggested it might not be as effective.

There is currently no data on Sputnik or Sinopharm’s efficacy against the 501Y.V2 variant.

“We don’t have any data so far about whether [Sputnik] is effective against the variant present here,” Mahomed said. “It wasn’t tested in South Africa at all.”

Sinovac has reported that their vaccine remained effective against the 501Y.V2 variant.

But trials show that the mRNA vaccine developed by Moderna in the United States has higher efficacy than Russian and Chinese vaccines.

But experts say the efficacy of different vaccines should not be compared because their trials were designed differently. The vaccines also need to be tested against the 501Y.V2 variant that has become dominant in South Africa to ensure that they are still effective.

We rate the claim as unproven. 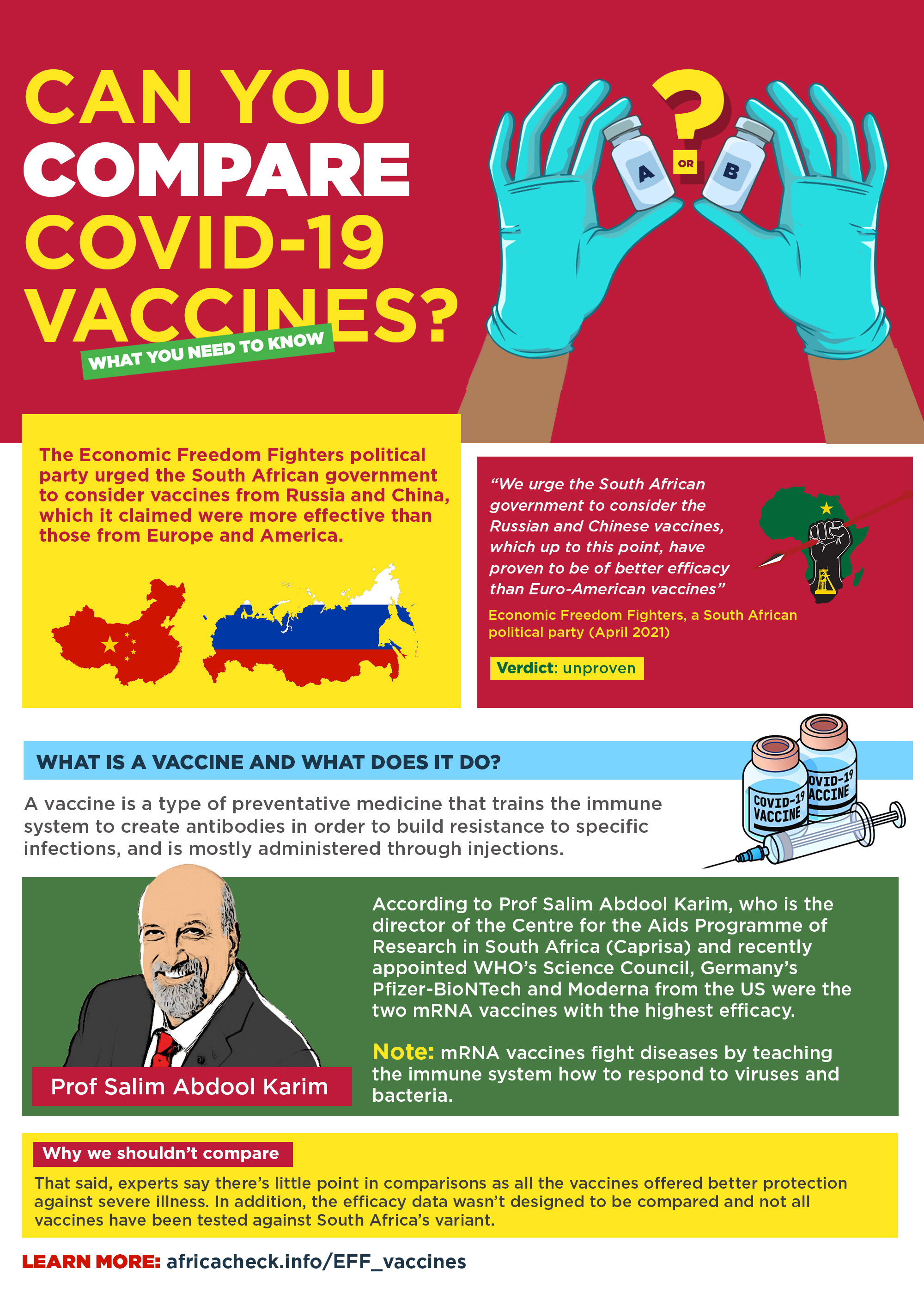 Russian and Chinese vaccines have “up to this point ... proven to be of better efficacy than Euro-American vaccines”.

Although an expert said two mRNA vaccines developed in Germany and the US had the highest efficacy, there’s little point in this kind of comparison.

FACTSHEET: What you need to know about vaccine approval in Kenya

Like in many other countries, Covid-19 vaccines are dominating the public debate in Kenya. But how are vaccines and other drugs given the gr...