Skip to main content
Back to Africa Check
KTN

As the seat of Kenya’s national government and a major economic hub, the race to govern Nairobi county is closely watched. But did Johnson Sakaja and Polycarp Igathe get their facts right in a feisty debate?

With the clock ticking down to the 9 August elections, Kenyan media organised a debate for candidates hoping to be the governor of Nairobi county.

Pollsters have Johnson Sakaja, who represents the county in the senate, and Polycarp Igathe, a former deputy governor, as the frontrunners. 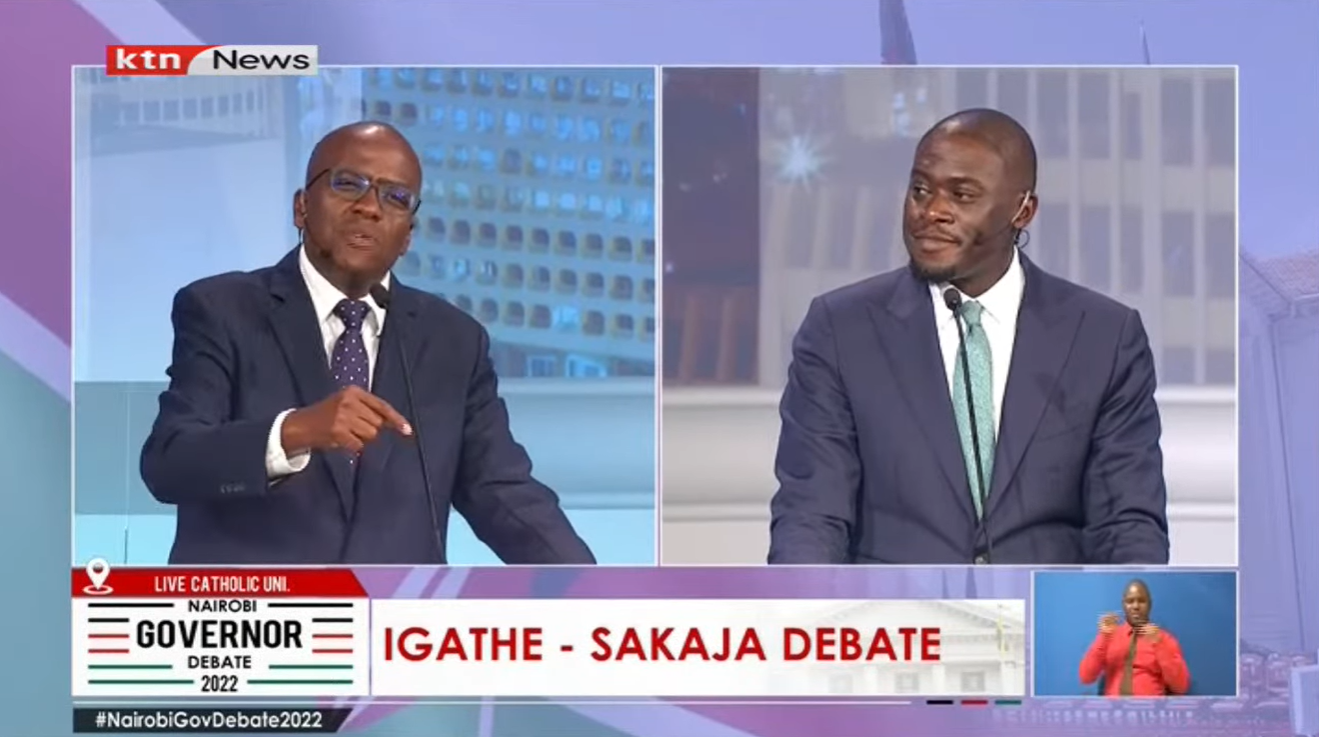 Sakaja is running on a United Democratic Alliance (UDA) ticket, while Igathe is the Jubilee Party candidate.

In a debate that was often bare-knuckled, the pair sparred about their respective visions for the Kenyan capital.

But when the dust settled, how did they fare with their facts? We looked at 10 of their claims.

We have contacted the offices of both candidates for the source of their data. We’ll update this report when we hear back.

Kenya’s 47 county governments get funding from the national government through monthly payouts by the national treasury. The money is shared equitably across the counties, and also in the form of conditional grants meant for a specific purpose.

This translates to: “Last year the national government sent KSh370 billion to the county governments.”

This data, published on 17 June, showed counties were due KSh409.9 billion, being KSh370 billion as equitable share and KSh39.9 billion in conditional grants.

The last full financial year for which there’s data is 2020/21. This showed treasury disbursed KSh346.2 billion to the counties as equitable share. These numbers are also corroborated by reports from the controller of budget. The treasury added KSh52.8 billion to this amount, bringing the total sent to counties to KSh399 billion.

We have not seen any figures that back Igathe’s claim that in the last financial year the national government sent KSh370 billion to counties. He appeared to have confused allocations with actual transfers. He also left out conditional grants, leaving him to work off an inaccurate base. –Makinia Juma

“Only 5% of the money sent to counties went to Nairobi.”

Igathe claimed that Nairobi got 5% of the money disbursed to counties.

The most recent data from the treasury was published on 17 June. This showed that of the KSh286.5 billion sent to the counties so far, Nairobi got KSh14.3 billion. This works out to 5%.

Until this point, Igathe is on the money.

He also mentioned “KSh370 billion”, which is the equitable share allocated to counties in the 2021/22 financial year.

Igathe argued that the capital deserves a bigger share of the national revenues in keeping with voter numbers.

“Wapiga kura Nairobi ni 11%,” he said in Kiswahili. This translates to “Nairobi has 11% of the voters”. He added that Nairobi had 2.4 million of the country’s 22 million voters.

Nairobi county has 2,415,310 registered voters. As a percentage of all the registered Kenyan voters, with or without those in prisons and the diaspora, this works out to 10.9% . Igathe was on the mark. –Tess Wandia

“The Kenya Revenue Authority has collected KSh2.2 trillion, 60% of that has come from the businesses and industries in Nairobi.”

This translates to: “The Kenya Revenue Authority has collected KSh2.2 trillion, 60% of that has come from the businesses and industries in Nairobi.”

On 7 July 2022 the tax agency announced it had collected a record KSh2.03 trillion in taxes in the 2021/22 financial year. (Note: Igathe exaggerated this figure by KSh200 billion.)

But does 60% of this revenue come from Nairobi businesses and industries?

“We have never come across a geographical spread to tax collection,” John Kinuthia told Africa Check. He is a senior programmes officer at the Kenya office of the International Budget Partnership, a budget transparency think tank.

“Igathe might have gone back to the old assumption about Nairobi contributing 60% of the GDP, which is also incorrect,” Kinuthia said.

In April, Igathe incorrectly said the Kenyan capital contributed 40% to the country’s gross domestic product. It is a resilient but inaccurate statistic, as we found in previous fact-checks in 2019 and 2021, and which Kenyan pundits continue to unfortunately rely on.

The most recent data showed Nairobi contributed 27.5% to Kenya’s GDP.

We have not seen any data showing how much taxes the revenue authority collects from the various counties in Kenya. Because we have no data to prove or disprove the claim, we rate it unproven.  –Makinia Juma.

“I have been rated the best performing senator in the republic of Kenya.”

“If you look at the studies that have been done for the last three year running, I have been rated the best performing senator in the republic of Kenya,” said Sakaja.

“Our scorecard is normally made on the basis of the contribution they make to the house. We also have a separate ranking, the one we call Shujaaz awards. This goes to specific issues that they raised,” Caroline Gaita, Mzalendo’s  executive director told Africa Check.

So is Sakaja the star of the Kenyan senate?

“We’ve ranked him from 2018, 2019 and 2020 and he was among the best performing senators,” said Gaita. “Sakaja was a Shujaaz awards recipient in 2018. He ranked highly in almost all our scorecards. His committee was also one of the best”.

There certainly is a ranking of Kenyan senators, and for three consecutive years Sakaja came out on top.  –Dancan Bwire

“I have brought more bills [to the senate] than any other senator.”

A bill is a draft law. The senate legislates on bills affecting counties.

Kenya’s senate has 47 elected senators, each representing a county. Sakaja was elected in 2017 to represent Nairobi city county.

Sakaja claimed he had brought more bills than any other senator and invited debate moderators to check the numbers.

For a record of his performance, we contacted the senate clerk Jeremiah Nyegenye. He referred us to data on the senate website.

The data showed Sakaja sponsored one bill, the Start-up bill 2020. He co-sponsored two others, the first with Mutula Kilonzo Junior of Makueni county and the other with nominated senator Farhiya Haji. His tally is three.

The bills were not specific to Nairobi, but affected all counties.

The senator with the highest number of bills is Dr Agnes Zani, nominated by the Orange Democratic Movement party. She has five bills to her name.

At least two other senators each have three bills to their name. They are Aaron Cheruiyot of Kericho county and Ledama Olekina of Narok county.

Senate data does not back Sakaja’s claim that he had the highest number of bills in the chamber. –Alphonce Shiundu

“Sakaja has brought more motions than any other senator.”

A motion is a proposal put forward for debate or decision in a legislative house.

The Kenyan senate has data on motions filed from 2017, when Sakaja was elected to the senate, to 16 June 2022.

Nominated senator Sylvia Kasanga proposed 15 motions between 2017 and 2022. Dr Abdullahi Ali, the senator for Wajir, was next with 13 motions to his name. Dr Getrude Musuruve sponsored 11 motions over the same period.

“I have brought more questions about the county administration of Nairobi than any other senator.”

Kenyan senate rules allow any senator to seek a statement from a senate committee on any matter. These statements are framed as questions about specific issues that a senator wants answers on from a ministry or any other government arm.

The most recent data shows Sakaja sought 28 statements in the senate since 2018, of which 23 were about Nairobi, while five were about policy issues across the country.

The questions ranged from demolitions of houses, health facilities in the capital and the city’s water problems to the governance challenges in the county government and the plans to ease congestion on  Nairobi’s roads.

Sakaja did raise the highest number of questions on Nairobi. Next was nominated senator Millicent Omanga, who sought 22 statements, half of which were about Nairobi –Alphonce Shiundu

“When I became the senator for Nairobi, Nairobi was receiving KSh15 billion”.

The work of a senator, Sakaja said, is to bring resources to the county. When he was elected, the county was receiving KSh15 billion, he claimed.

The national treasury releases funds to county governments every month. The controller of budget keeps a record of annual transfers from the national government to each county.

In 2016/17, the full financial year before Sakaja’s election as senator, Nairobi received KSh14.02 billion in equitable share, and KSh576 million as conditional grants, for a total of KSh14.6 billion.

In his first financial year in office, 2017/18, the county got KSh15.4 billion inequitable share and KSh817.4 million as conditional grants, making for a total of KSh16.2 billion. The average across the two years is about KSh15 billion.

We therefore rate the claim as mostly correct. –Grace Gichuhi

In the financial year 2020/21, the controller of budget reported that Nairobi county received KSh19.4 billion in equitable share, and KSh254.2 million as conditional grants. They add up to KSh19.7 billion.

The most recent treasury data, published on 17 June 2022, shows that Nairobi has so far received KSh14.34 billion of a total allocation of KSh19.4 billion as its equitable share in 2021/22. It was also set to get KSh1.02 billion in conditional grants.

The financial year ended on 30 June, but the treasury has yet to release annual data.

A rise from KSh16.2 billion received in his first year in office, to KSh19.7 billion in 2020/21, the most recent year for which we have full data, works out to KSh3.5 billion. We therefore rate the claim as mostly correct. –Grace Gichuhi