Two claims about cancer in Malawi.

One incorrect, one understated.

A South African news website recently made a startling claim about the burden of cancer in Malawi, while reporting on inexpensive cancer screening and treatment methods.

“Cancer is the leading cause of death in Malawi, at around 35%,” the Independent Online claimed in June 2021.

Malawi is a southern African country of 19.6 million people.

The article also said that cervical cancer in particular accounted for 10% of the country’s cancer deaths.

The publication has made the two claims elsewhere. But are they accurate?

What is cervical cancer?

Cancer is a large group of diseases that are characterised by the uncontrolled growth of abnormal cells in the body.

Cervical cancer is the abnormal growth of cells in the cervix, the lowest region of the uterus or womb in a woman’s reproductive system.
The primary cause of this type of cancer is infection with certain types of the human papilloma virus (HPV), according to the Cancer Association of South Africa.

HPV is extremely common and is spread through skin-to-skin contact, body fluids and sexual intercourse. The World Health Organization (WHO) says cervical cancer can be cured if diagnosed early and treated promptly.

Cancer is the leading cause of death in Malawi.

The news website told Africa Check the claims were sourced from Doctors without Borders/MSF. We have contacted the health NGO and will update this report with their response.

For information on the leading causes of death in Malawi, Miriam Schneidman, a lead health specialist in the World Bank’s Africa region, recommended we look at the most recent data from the Institute for Health Metrics and Evaluation (IHME). This is from 2019.

The IHME is an independent global health research centre at the University of Washington in the US.

The data shows respiratory infections and tuberculosis were the leading causes of death in Malawi, a pattern also observed in Africa. In 2019 these infections accounted for 14.7% (17,163) of total deaths in the country..

Cardiovascular disease (13.43%) and HIV/Aids and sexually transmitted infections (13.39%) were the next leading causes of death.

The fifth leading cause of death was listed as neoplasm, a tumour or abnormal mass of tissue that may be benign (not cancer) or malignant (cancer). These caused 10,110 deaths, the vast majority being from malignant neoplasms.

Based on this data the claim is incorrect.

The IHME gives neoplasm deaths in Malawi as 10,110.

We also asked the WHO’s International Agency for Research on Cancer (IARC) about the number of cancer deaths in Malawi.

Spokesperson Véronique Terrasse directed us to a factsheet by the Global Cancer Observatory, or Globocan, which is part of the IARC. This showed 12,454 cancer deaths in 2020.

Jacques Ferlay is an informatics officer at the IARC’s cancer surveillance branch.

He told Africa Check that because there weren't quality national vital statistics, [such as cause-of-death data], in Malawi, sub-national cancer incidence counts from the cancer registry in Blantyre city and models of new cases and deaths were used to make the estimates.

Ferlay said the IARC data could be different to what others found because Globocan relied “on the data recorded in the country rather than on the use of covariates and modelling”.

(Note: Covariates in statistics are the characteristics of research participants.)

But he recommended the use of the IARC statistics on cancer deaths in Malawi, which showed 12,454 deaths.

Egypt and Nigeria highest for cancer deaths in Africa

According to the WHO, about 70% of deaths from cancer are in lower and middle-income countries. Of these, about a third are from five leading  behavioural and dietary risks, which are “high body mass index, low fruit and vegetable intake, lack of physical activity, tobacco use, and alcohol use”.

In the WHO’s Global Cancer Observatory 2020 Egypt and Nigeria had the most cancer deaths in Africa, with Malawi not in the top five. But when population size was considered, Zimbabwe had the highest cancer mortality rate in sub-Saharan Africa with 146.7 deaths per 100,000 people in 2018. 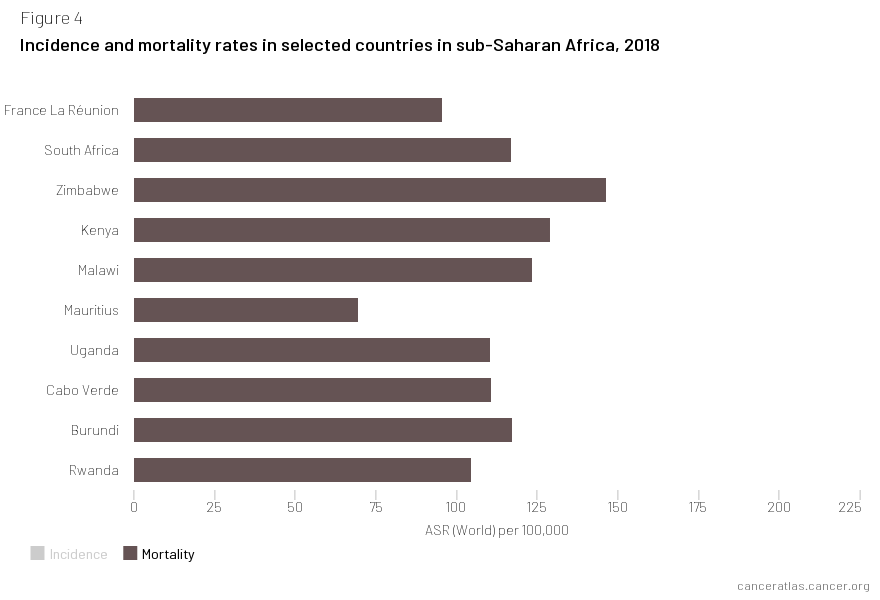 Cervical cancer accounts for 10% of the deaths.

Globocan data shows that Malawi had 2,905 deaths from cervical cancer in 2020.

This means that cervical cancer accounted for 23.3% of the estimated 12,454 deaths from cancer in Malawi that year, more than twice the 10% claimed by the Independent Online.

Véronique Terasse from the IARC also directed us to the WHO’s data on cervical cancer. Due to insufficient data on Malawi, the IARC considered data from neighbouring countries.

Malawi’s percentage of cervical cancer deaths therefore falls within the range of 20.6% for Southern Africa and 28.6% for East Africa.

Conclusion: Cancer not leading cause of death in Malawi

In an article about Malawi’s burden of cervical cancer, South African news website Independent Online made two startling claims. The first was that “cancer is the leading cause of death in Malawi, at around 35%”.

This is incorrect – cancer ranks fifth, with respiratory infections and tuberculosis claiming the most lives in the country.

The world needs facts. We need you!

Two claims about cancer in Malawi.

One incorrect, one understated.

Does Malawi have just 300 doctors for 16 million people?

Africa’s most populous nation is experiencing an increase in cervical cancer cases because of the Covid-19 pandemic, said a prominent oncolo...

The World Health Organization’s most recent data on global deaths has good news for the African continent: fewer people are dying of HIV/Aid...