Sky News claimed that a woman or child is raped every 26 seconds in South Africa was from the United Nations, there is no such statistic.

South Africa has a worrying rape problem. But it also has a rape statistics problem. The country’s annual crime statistics tell us how many rapes are recorded each year, but due to underreporting this figure is not the same as the number of rapes committed.

So a recent news story by UK based Sky News caught Africa Check’s attention when it stated as fact: “It is estimated that a woman or girl is raped every 26 seconds in South Africa – and violence against women is an ‘almost accepted social phenomenon’, according to the United Nations.”

(Note: The story has since been taken down – without explanation – but an archived version can be viewed here.)

Is this estimate accurate? 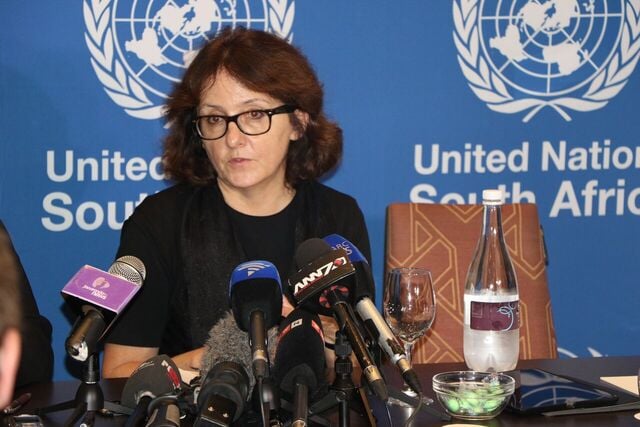 The United Nation’s Special Rapporteur on violence against women, its causes and consequences, Dubravka Šimonović, toured South Africa in December 2015 to gather information about the high levels of gender-based violence in the country." />

Africa Check asked Crawford and Sky News via Twitter for the source of the “every 26 seconds” statistic.

Crawford replied, saying that it was from the United Nations – “a fairly reputable world body”. However, she ignored numerous follow up questions asking for the UN report or representative that provided it.

Crawford’s dispatch followed the visit of the UN’s Special Rapporteur on “violence against women, its causes and consequences”, Dubravka Šimonović, to South Africa last month.

Šimonović toured the country for 7 days, meeting with government officials, civil society organizations, academics and communities about the high levels of gender-based violence in the country. She will release a report on her conclusions and recommendations in June 2016.

Stat not from the UN

On completing her visit, Šimonović did state that violence against women and children is “an almost accepted social phenomenon” but did not release any statistics.

“The Special Rapporteur on Violence against Women, its causes and consequences did visit South Africa… but did not venture to cite any statistical data,” said human rights officer in the equality, non-discrimination and participation unit, Nathalie Stadelmann.

UN Women communications and media specialist, Oisika Chakrabarti, told Africa Check that, as far as she was aware, they had not released the statistic.

Buzzfeed reported that the “every 26 seconds” statistic appears to have been calculated by South African advocacy organisation Rape Crisis using reported rapes, indecent assaults and incest cases from 1998. The organisation estimated that only 5% of these crimes were reported to the police and that this equated to a rape being committed every 26 seconds.

South Africa’s Mail & Guardian newspaper and the Christian Science Monitor both published the claim in 1999. South African actress Charlize Theron also cited it in an anti-rape campaign and US news programme 60 Minutes included it in one of their shows in 2000.

However, this 17-year-old claim should not be used to estimate the extent of rape in South Africa today.

The most recent research on the underreporting of rape, conducted in Gauteng in 2010, found that only one in 13 women reported non-partner rape and overall only one in 25 rapes had been reported to the police. But this reporting rate is specific to Gauteng. It can not be applied to South Africa as a whole.

Until research is undertaken to determine a current national underreporting rate it will be impossible to calculate an accurate estimate of how many rapes are committed each year in South Africa.

Conclusion: ‘Every 26 seconds’ statistic not from the United Nations

Sky News claimed that a statistic that a woman or child is raped every 26 seconds in South Africa was from the United Nations. But both the UN’s Special Rapporteur on violence against women and UN Women have confirmed that they did not release the statistic.

Sky News has since removed the report from their website without explanation. But a lot of their tweets containing the statistic have been left online.

Due to a lack of research the number of rapes committed each year in South Africa can’t be accurately estimated. The void mustn’t be filled with recycled and unsubstantiated claims.

Will one in three women in SA be raped? Blow the Whistle wrong again

Be Careful About Sharing That Statistic About Rape In South Africa