Unlike the spreaders of misinformation, who don’t mean harm, disinformation actors knowingly cause damage to people, social groups, organisations and even countries. In the second of a three-part series examining falsehoods on Twitter, Jean le Roux sorts misinformation from disinformation in three popular hashtags.

When a young comedian from Sebokeng tweeted about giving people “mini heart attacks” with the hashtag #RamaphosaResigns, he might not have set out to cause harm.

But the viral hashtag was co-opted by anonymous accounts to drive a false politically motivated narrative that South African president Cyril Ramaphosa had resigned – and misinformation turned into disinformation.

Missed part one in the series? Read it here.

Chief among the agitators was @Advovolicious, an anonymous Twitter account that was spun off the @AdvBarryRoux account. @Advovolicious falsely claimed that Ramaphosa would announce his resignation during a public address that evening, in July 2020. In reality, Ramaphosa would give a briefing on the government’s Covid-19 relief efforts. 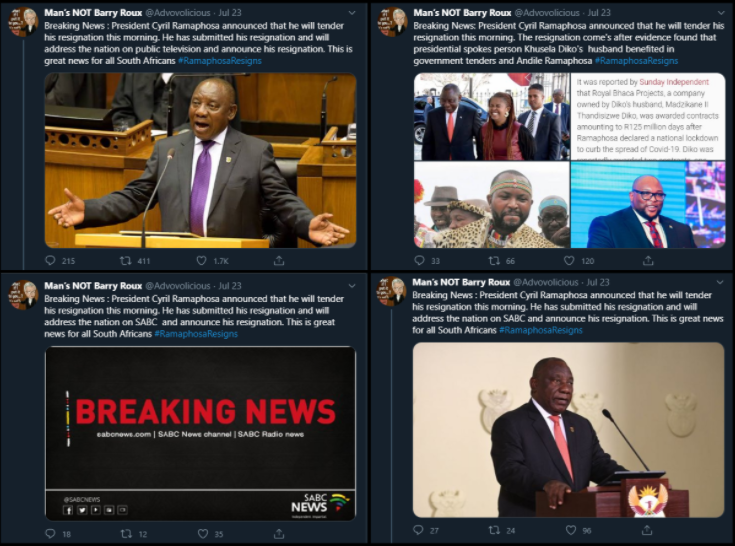 The @Advovolicious account repeatedly tweeted the falsehood that South Africa’s president would resign.

The initial tongue-in-cheek jab from the Jan Van Potgieter (@SciTheComedist) parody account was lost in the resulting noise. 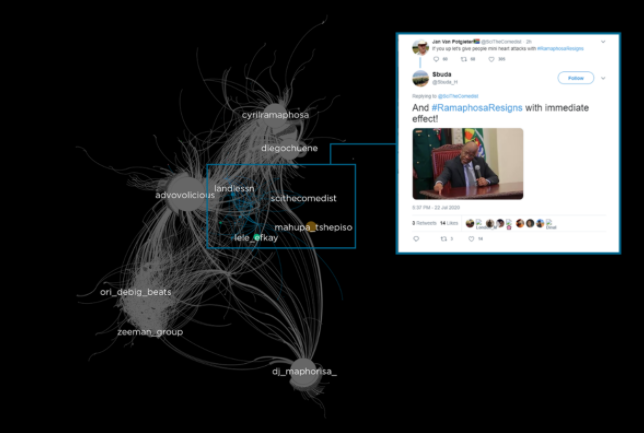 A social network graph of the original tongue-in-cheek tweet about Ramaphosa’s resignation, indicating how small it was compared to the larger conversation.

In a strange twist, the same @SciTheComedist account started the #VoetsekANC hashtag, apparently in response to an #ANCFriday campaign by ANC supporters.

2. #VoetsekANC: The campaign that wasn’t

Like clockwork, #VoetsekANC surged on Fridays, as the regular spikes in mentions show. (The Afrikaans “voetsek” can be roughly translated as “piss off”.) On the surface, it appeared to be a coordinated campaign targeting the ANC.

High-follower Twitter accounts engaged with the hashtag on a weekly basis, usually around service delivery or government-linked corruption.

But a deeper dive shows that the traffic is organic. 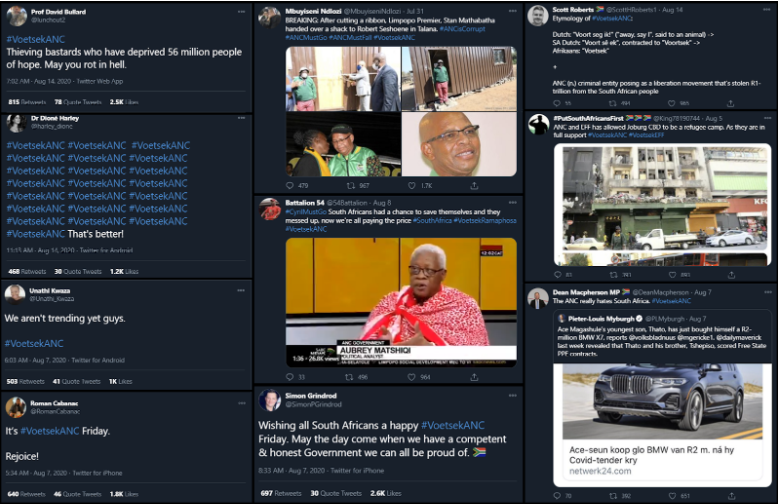 The #VoetsekANC hashtag found traction across the political spectrum.

The hashtag has been used by leaders in the Economic Freedom Fighters (EFF) and Democratic Alliance political parties, as well as accounts from conservative, libertarian, liberal and nationalist groups. The diverse nature of these accounts, spanning the political and ideological spectrum, makes it unlikely that it is a coordinated and inauthentic disinformation operation.

A snapshot of the use of #VoetsekANC on 6 December 2020 makes this clear. 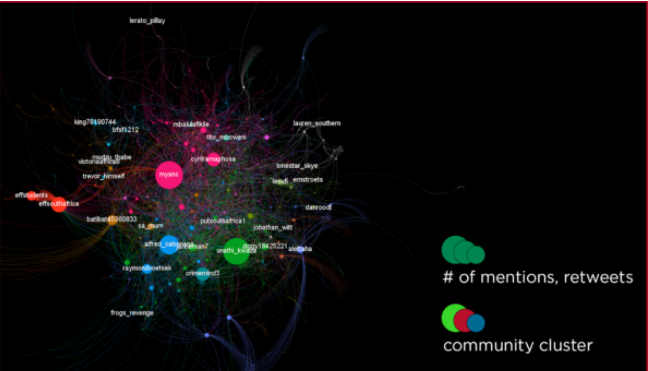 Several communities, indicated in different colours, have actively engaged with the #VoetsekANC hashtag for their own reasons. They represent a broad spectrum of political ideologies.

The #PutSouthAfricansFirst hashtag was used 945,000 times by slightly more than 115,000 individual users, and at times trended many times per week in 2020. (Note: The numbers have declined since the beginning of December, when there were 144,000 accounts and 1.15 million mentions. It appears Twitter has taken action against several of these accounts.)

The phrase “Put South Africans First” was used by the African Transformation Movement during its campaign ahead of the 2019 national election. But the hashtag became prominent in April 2020, when the @ulerato_pillay Twitter account used it to take a swipe at EFF leader Julius Malema. 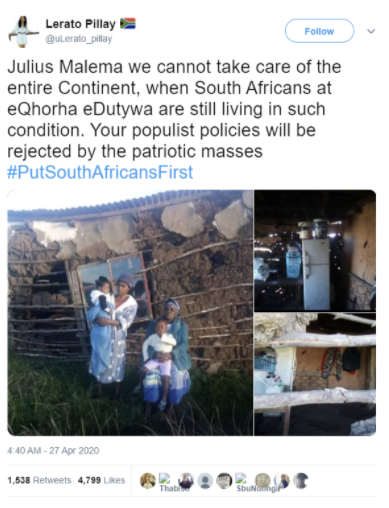 The account was deactivated after the DFRLab identified its owner as Sfiso Gwala, a dismissed South African National Defence Force member from Richards Bay in KwaZulu-Natal province. It has since been replaced with the @lerato_pillay account. This was likely done to erase the account’s history and associated evidence.

The network consists of a core of accounts aggressively retweeting and engaging with narratives that tap into South Africans’ discontent with crime, unemployment and poor service delivery.

The largest share of this traffic consists of retweets (65%) and quote tweets (21%) with only 6% of tweets using the hashtag being original. This low share could indicate that a small number of accounts are coordinating original tweets, while the rest simply amplify their message.

The narratives spread by the proponents of the hashtag touch on real issues such as unemployment, crime and lack of service delivery.

What makes it disinformation is the disproportionate blame these tweets place on foreign nationals – in some cases based on made-up “facts”.

For example, on 14 August 2020 the @uLerato_pillay account posted a photo of a crowded hospital with patients sleeping on the floor. The tweet claimed that South African patients were suffering because foreign nationals were taking up hospital beds. A reverse image search revealed that the photo was taken at a Nigerian hospital in April 2019 – almost 16 months before Gwala’s tweet. 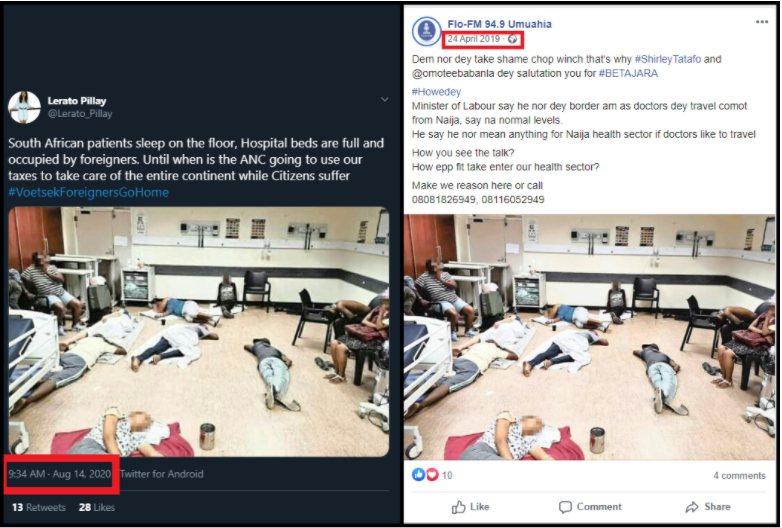 Several #PutSouthAfricansFirst tweets that used made-up statistics have since been deleted. For example, in September 2020 Gwala claimed that 70% of the University of South Africa’s employees were foreign nationals. But Unisa says 97% of its full-time and fixed-term staff are South Africans.

Examples of fabricated content used in the #PutSouthAfricansFirst campaign.

Despite hashtag users’ claims that it is a “patriotic movement”, much of the content is openly xenophobic. Users have described foreign nationals as cockroaches – a term reminiscent of the Rwandan genocide.

All this had the effect of serving, for several months, as a dog whistle for people who buy into xenophobic narratives or become convinced that the “real problem” is foreign nationals. The result is clear: replies to Gwala’s tweets urge violence against foreigners.

(Gwala failed to respond to a request for comment by the time of publication.)

The network consists of a core set of accounts that create and share xenophobic narratives. Other accounts, some operated by real individuals who buy into the narratives, then retweet and engage with the content. The disproportionate amount of traffic that comes from a small share of accounts points to coordination – and disinformation.

A representation of the number of original tweets versus the total number of tweets (including retweets and replies) using #PutSouthAfricansFirst. The total volume closely tracks the original tweets during large spikes, suggesting some level of coordination.

In November 2020, #PutSouthAfricansFirst was used in 122,000 tweets and by about 24,800 Twitter users. But the 10 most vocal accounts were responsible for a disproportionately high number of mentions.

A network graph using 3,200 recent tweets from each of the 10 most active users of #PutSouthAfricansFirst (as at 4 December 2020) shows who they interacted with most often. 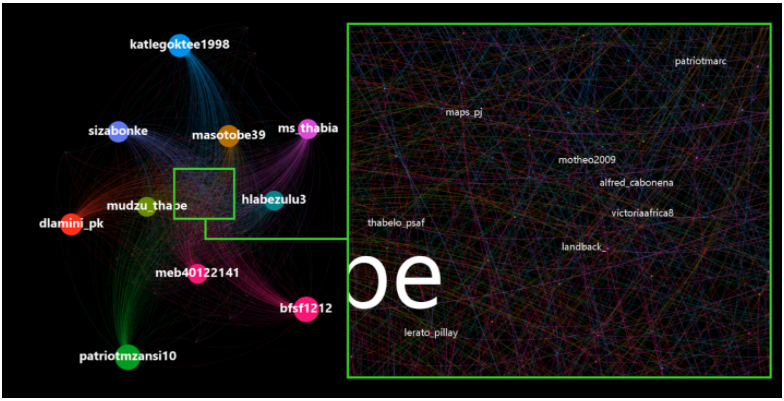 When you strip away some of the noise, it is clear that these 10 accounts engage with, retweet and reply to many of the accounts involved in the #PutSouthAfricansFirst network. In essence, this means a small cluster of accounts are aggressively engaging with the accounts in the centre and each other in an attempt to create the perception of a legitimate movement.

A closer look at the accounts engaging with and retweeting this content reveals suspicious behaviour such as a high volume of retweets on a single topic.

One of the most vocal accounts in November 2020 was @Hlabezulu3, created on 30 October 2020. Despite being a brand new account, it tweeted 7,387 times, peaking at 380 tweets in a single day on 24 November 2020. That is an average of almost one tweet every four minutes. Most of these tweets were retweets from several #PutSouthAfricansFirst accounts. 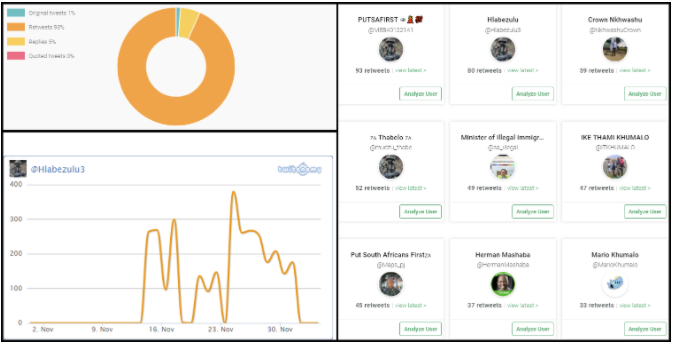 An analysis of the @HlabeZule3 Twitter account while it was still active. The account mainly retweeted accounts within the #PutSouthAfricansFirst network (right), and posted large volumes while doing so.

Not even the departed were off limits in this campaign. The Twitter account of Faith Gwedashe-Ndamase, a former Mrs South Africa finalist and Alex FM radio host who died in a car accident in September 2017, was repurposed to target journalist and author Nechama Brodie* with antisemitic tweets. Gwedashe-Ndamase’s profile pictures and user handle were changed, her bio altered and her previous tweets deleted before rebranding as the @MProphet101 account. 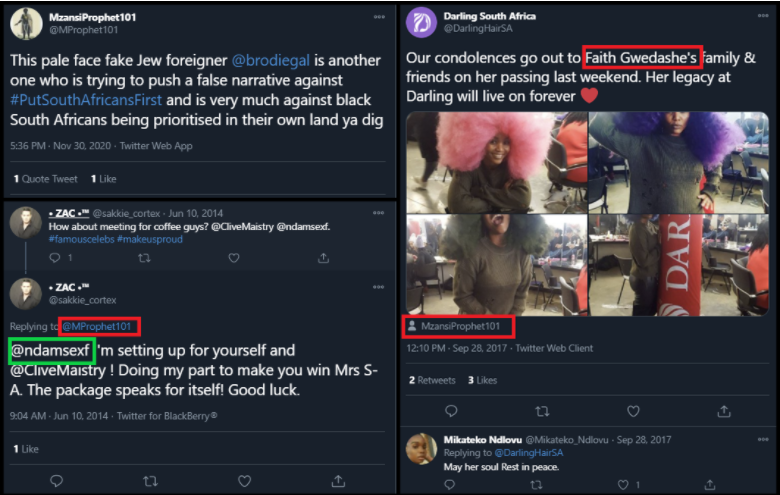 What these case studies show is that a small, coordinated group of individuals can take real issues, taint them with their own agendas and then spread the repurposed narrative with relative ease on social media.

A joke quickly turned into a negative PR campaign against Ramaphosa based on the actions of one influential account that twisted the #RamaphosaResigns hashtag. A small, active and coordinated group of accounts distorted facts and maligned foreign nationals under the auspices of a “patriotic” #PutSouthAfricansFirst movement.

The success of such campaigns mainly hinge on tapping into existing prejudices – against a political party, organisation or a group of people – to exploit it for the disinformer’s agenda.

By contrast, #VoetsekANC developed organically. It transcended political and ideological boundaries to become an event that was almost celebrated weekly.

This is the second part in a three-part explainer about disinformation on Twitter – the result of a collaboration between Africa Check and the Atlantic Council’s Digital Forensic Research Lab (DFRLab). Part one covers disinformation actors, their behaviour and content. The final part considers how individual social media users could respond.