Will one in three women in South Africa be raped? Blow the Whistle wrong again

Will a third of women in South Africa be raped in their lifetime? This was claimed in an article about the anti-rape organisation Blow the Whistle on the website Women24.

“New statistics now show that 1 in 3 women in South Africa will be raped,” it reads.

Last year Blow the Whistle claimed that 74,400 women would be raped in August alone in South Africa. Our investigation found that they had botched the statistics.

Have they done their research properly this time?

Claim was made in press release 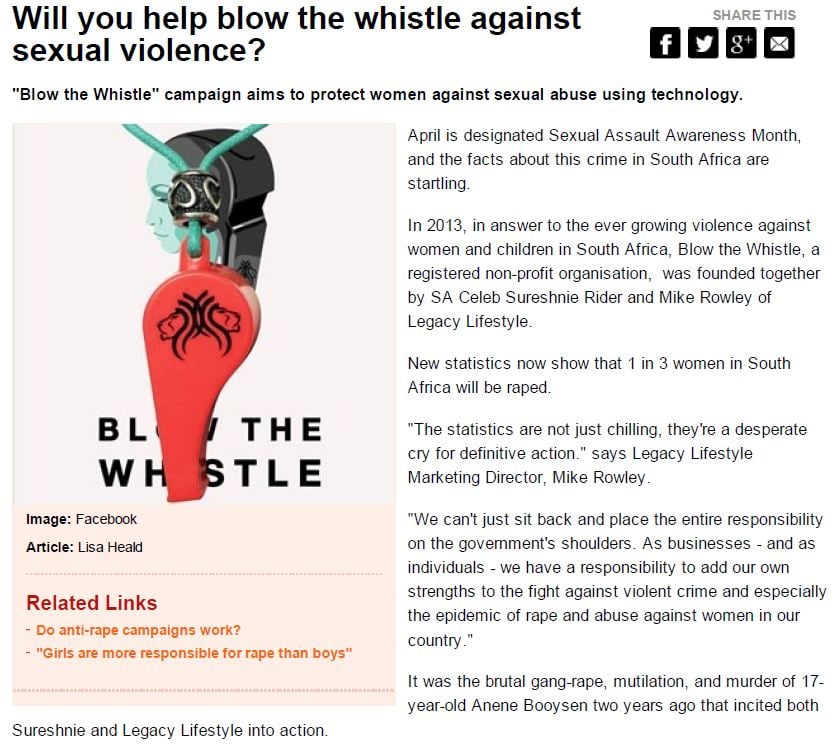 The claim was published in an “article” which did not disclose that the author, Lisa Heald, is a public relations manager for Blow the Whistle.

Women24’s editor, Lili Radloff, told Africa Check that the article should have been marked as a press release.

“That was an oversight on my part. It seemed such an obvious press release that I did not think to point that out clearly. We have since amended the article to reflect that,” she said.

Radloff added that Women24 would begin implementing a “more formal policy” on publishing press releases from now on.

We contacted Heald about the source of the claim. She sent our query to her boss, Ingrid Roding. Roding replied, saying that the claim was from a document referred to in a Radio 702 podcast.

The document is called “Rape – The Cold, Hard Facts” and states: “Extrapolating from the statistics, 1 in 3 South African women will be raped in their lifetime”. But it does not say which statistics.

Roding said that this statistic and the others on the page were from Rape Crisis, a Cape Town organisation that provides support to rape survivors. But Rape Crisis’ director, Kathleen Dey, denied any link to the 1-in-3 claim. “None of those statistics come from Rape Crisis,” she said.

The only part of the document sourced from Rape Crisis was a section titled: “What to do if you are raped or sexually assaulted.”

(Note: the document Roding referred to also includes the infamous - and false - claim that Interpol has declared South Africa the “rape capital” of the world.)

No new stats support the claim

GCIS staff distributed pamphlets and carried placards to mark a “Day of Action Against Rape” at the Sammy Marks Square in Pretoria in February 2013. Photo: GCIS" />

Lisa Vetten, a researcher specialising in gender violence at the Wits Institute for Social and Economic Research, told Africa Check that she wasn’t aware of any new research that provides national data on the extent of rape.

The director of the gender and health research unit at the Medical Research Council, Prof Rachel Jewkes, said she thought the claim that one in three women was raped sounded too high.

“I am not aware of new research and the highest figures I have seen are 25%,” she told Africa Check.

However, these figures cannot be extrapolated to the whole country.

The only reference that Africa Check could find to a figure of “one in three” was related to a 1998 study by a research centre called Community Information, Empowerment and Transparency (CIET). According to an old press release, 3,700 women were surveyed and researchers found that “[i]n the last year, three out of every ten women in the South of Johannesburg area were victim to a severe form of sexual violence”.

We couldn’t find a copy of the report itself anywhere, but CIET has promised to email it to us. However, Jewkes said that this study was “highly flawed” and Vetten pointed out that it was again not nationally representative.

Rape Crisis’ Dey said that rape is notoriously hard to measure because of the high levels of under-reporting. But she implored advocacy organisations to use the most recent, credible estimates.

“We want real statistics,” she said. “They allow us to measure our progress towards bringing change.”

Vetten added that: “When organisations present inaccurate information as fact they run the risk not only of undermining their own credibility, but also that of the broader movement to combat rape.

“This is because when shown to be inaccurate, the public may dismiss statistics released in future as similarly inaccurate sensationalism and claims-making.”

Conclusion: Blow the Whistle wrong; no data supports the claim

The claim made by Blow the Whistle, which was initially published by Women24 without proper attribution nor any apparent attempt to check for evidence, is not supported by the data, "new" or otherwise.

The best available figures do not present a reliable national picture, but they do show a very real crisis.

But, as the researcher Lisa Vetten points out, organisations that present inaccurate information as fact not only harm their own credibility but also that of the broader movement to combat rape. As Rape Crisis points out, having accurate and detailed statistics on crimes of sexual violence "allow us to measure our progress towards bringing change.” It is why it is important that the data we do have is not misrepresented.

Will 74,400 women be raped this August in South Africa?