Yes, Kenya’s executive takes the lion’s share of funds - but not 95%

95% of Kenya’s budget resources go to the executive


Battling to make ends meet, Kenya’s treasury recently increased taxes and slashed budgets, adding fuel to a national debate about the state of the country’s finances.

Parliament is not too costly as often alleged, former presidential adviser Abdikadir Mohamed said on a September 2018 current affairs talkshow. A constitutional lawyer, Mohamed is also a former legislator.

He said Kenya would save more money if it trimmed spending by the executive – the arm of government responsible for the daily management of a country.

“What is relevant is that the majority, 95%, of [budget] resources go to the executive,” Mohamed said.

Kenya’s constitution sets out the three main arms of the state as:

Is almost all of Kenya’s budget gobbled up by its executive arm of government?

The only beneficiaries of the budget are the executive, judiciary and parliament, Mohamed told Africa Check. In this context the executive was, of the three, the biggest drain on the country’s coffers.

But is his estimate true for the whole budget, which not only funds the three arms of government but also covers obligations such as salaries and debt repayments?

Even when “looking at the global figure… the whole budget”, the executive took the lion’s share, Mohamed said.

In its most recent full expenditure report, Kenya’s treasury said the country spent KSh2.11 trillion in the 2017/18 financial year. The three arms of the government accounted for more than half (KSh1.14 trillion) of this:

In this table, the executive’s share of the budget for the three arms of government is 96.5%.

The national government’s income is collected into what is known as the consolidated fund. The fund first provides for payments it is obliged to make, such as debt repayments, salaries for some state officers and pensions. Only then are the government’s three arms given their spending budgets.

This is according to John Kinuthia, lead research analyst at the International Budget Partnership Kenya. The organisation works to provide information on budget spending to ordinary citizens.

“First of all, we take off the things that are like statutory payments that we have to do as a first charge on the consolidated fund, and completely get them out of the shareable revenue,” Kinuthia told Africa Check.

These initial payments are known as consolidated fund services. What remains is then shared between the national government and the 47 counties, Kinuthia said.

Executive spending in the 2017/18 financial year 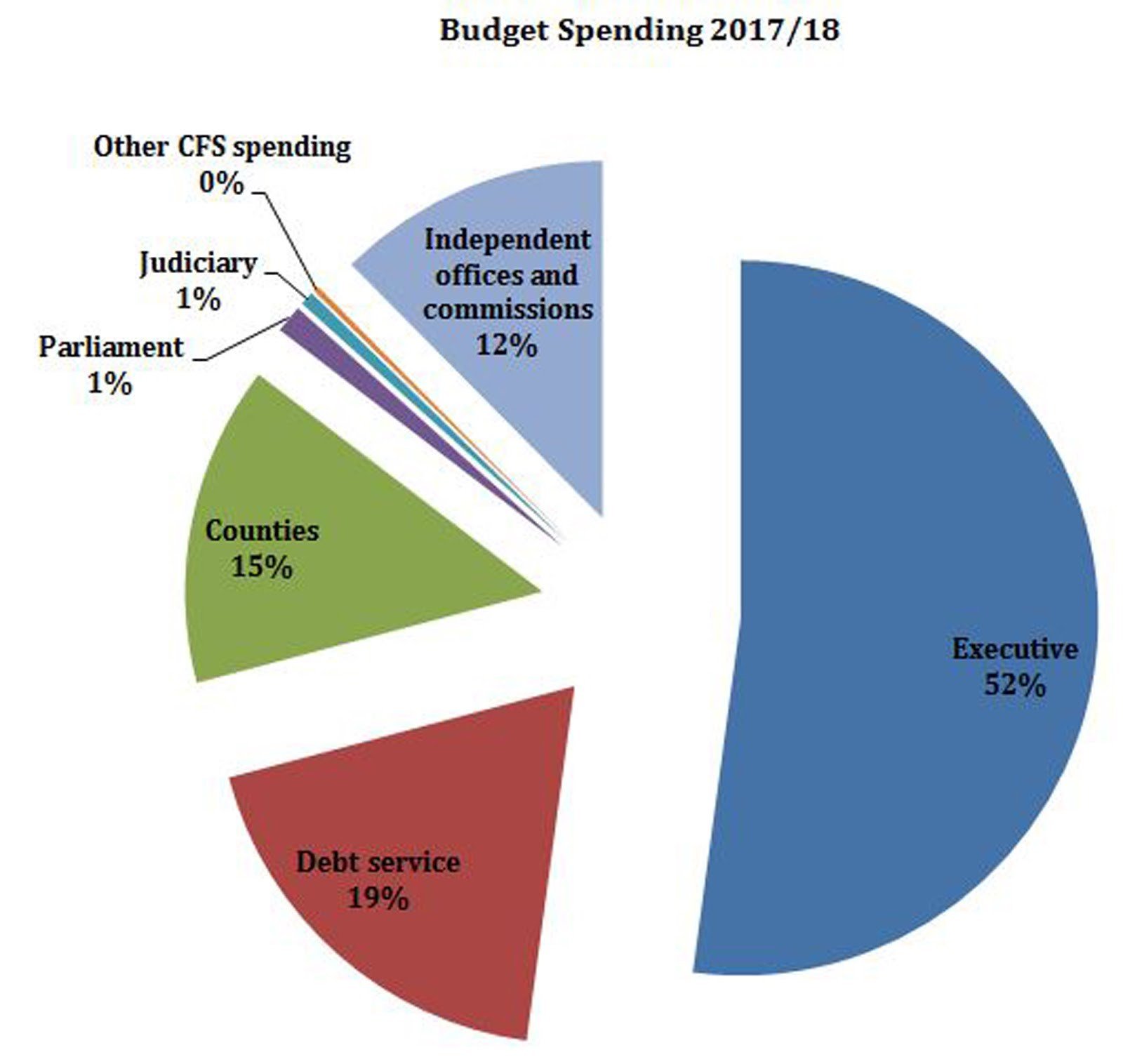 The estimates set aside KSh962.5 billion for consolidated fund services, with the bulk of it, KSh870.6 billion, marked as public debt.


Conclusion: Kenya’s executive takes largest share of budget, but not 95%

Former presidential adviser Abdikadir Mohamed claimed Kenya spent 95% of its money on the government’s executive arm. This left little over for the other two arms, the judiciary and the legislature.

In 2017/18 the executive received 96.5% of the funds set aside for the three arms of the government. But the national budget is bigger than this, paying for other obligations such as salaries, pensions and debt.

Mohamed is right that the executive takes the lion’s share of resources, but that share is not as high as 95%. In the 2017/18 financial year the executive received 52% of the total budget, while in 2018/19 it will get a lower amount of 46%.

95% of Kenya’s budget resources go to the executive