South African police minister Nathi Nhleko has a Master’s degree from Leeds Metropolitan University in the United Kingdom, contradicting a claim by a Democratic Alliance MP that he “left school somewhere in Standard 9 [and] has no further education”.

DA MP Dianne Kohler Barnard raised the issue of Nhleko’s academic qualifications during the debate on his first budget vote speech as police minister on Monday.

“I looked at his slim CV,” she said, “and it took me a while to dig out some background information.

“He seems, from what I have seen, to have left school somewhere in Standard 9, has no further education – yet he mysteriously ended up as the [Director General] for Labour.” (That was the position Nhleko held until his appointment as police minister earlier this year.)

Qualification claims in the spotlight

Kohler Barnard’s comments come in the wake of damaging revelations about the CVs of a number of prominent public figures in South Africa.

Earlier this year Africa Check reported  that an official “profile” of Thandi Modise – then the premier of North West province and now the chairwoman of the National Council of Provinces – was riddled with false claims and inaccuracies.

In February, South Africa’s Public Protector Thuli Madonsela found that Hlaudi Motsoeneng, the head of the country’s state broadcaster, the SABC, had fraudulently misrepresented his qualifications.

And, more recently, the City Press newspaper reported that SABC chairwoman, Ellen Tshabalala, had also lied on her CV.

Nhleko does have 'further education' 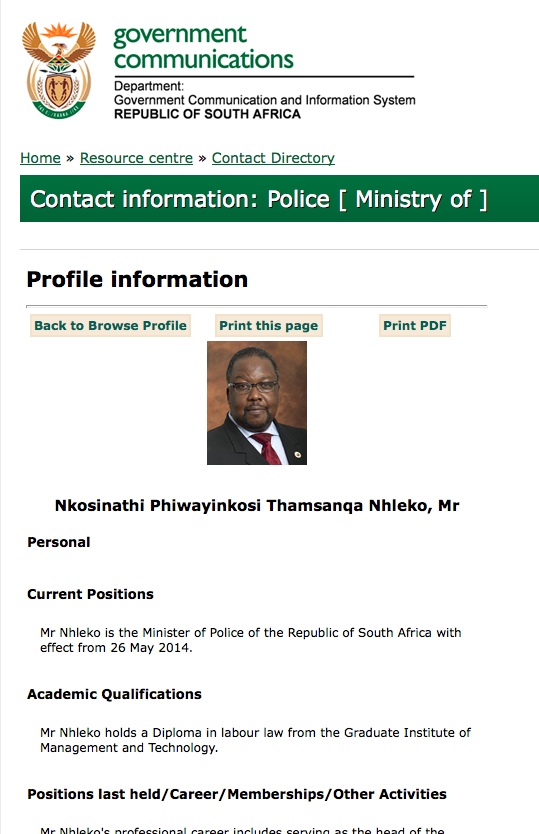 In response to Kohler Barnard, Nhleko insisted that he had a “masters in leadership and change management with the Leeds Metropolitan University in the UK" and "a national diploma in labour law at an honours level with the Graduate Institute of Management and Technology".

Today he sent Africa Check certified copies of  his qualifications from Leeds Met - as the university is more commonly known - and the Graduate Institute.

A Leeds Met press officer also confirmed today that Nhleko had been awarded a master’s degree in "leadership and change management" on 21 June 2012.

(Note: Applicants for the Leeds Met degree should have "a second class honours degree or have equivalent experience or training". But provision is also made for "mature students" who "demonstrate academic potential".  According to the university's website: "We usually require some evidence of recent academic study, for example completion of an access course, however relevant work and life experience may also be considered.")

The Graduate Institute of Management and Technology (GIMT) however no longer exists and has been “de-registered” from the Department of Higher Education and Training’s register of private higher education institutions. The company itself appears to have been liquidated.

Kohler Barnard was correct in one respect. Nhleko didn't finish high school. His spokesman, Musa Zondi, said today that the minister had not completed his matric.

A copy of Nhleko's detailed nine-page CV  - which Zondi forwarded to us - states that he attended Amangwe High School from 1982 to 1986, the year in which the apartheid government's "State of Emergency" was at its height. It notes that he failed matric twice and did not sit the exam a third time because he had been "detained without trial".

Asked how she had concluded that Nhleko “has no further education”, Kohler Barnard told Africa Check she had relied on a profile published on the Who’s Who Southern Africa website.

"I typed in ‘Nathi Nhleko CV’ and I looked at the first CV that came up. It only listed one entry under his educational qualifications." That entry is for Amangwe High School.

However, his official government biography states only that Nhleko “holds a diploma in labour law from the Graduate Institute of Management and Technology” and makes no mention of his schooling or master’s degree.

Conclusion: Claim that Nhleko has 'no further education' is false

Kohler Barnard was wrong to claim that Nhleko has "no further education". Leeds Metropolitan University has confirmed that he was awarded a master's degree in 2012. And Nhleko has produced certified copies of his master's degree and a labour law diploma.

She was however correct that he did not complete high school. Nhleko openly admits that he failed matric twice and did not complete a third attempt because,  he says,  he had been detained without trial in 1986, the year the apartheid government's brutal State of Emergency was at its height.