If Zambia has 60% of the freshwater in the Southern African Development Community (SADC), why does it import fish from China?

Investment consultant, Fisho Mwale, reportedly referred to this state of affairs when he made a presentation at a national enterprise conference in Lusaka last week.

The claim that the landlocked country is home to 60% of the community’s water has appeared before in a 2012 tweet, a press release by the Southern Africa Zambia chamber of commerce and is also on the agenda for a conference about commercial farming in Africa to be held in October.

The Organisation for Economic Co-operation and Development (OECD) published a similar claim in 2012 by stating that "Zambia's water courses account for about 60% of water resources in the SADC region".

Zambia is one of 15 member countries in the SADC. Two big tributaries of the Zambezi river flow through Zambia, it contains lake Bangweulu and shares lake Mweru and the southern end of lake Tanganyika. Could it possess 60% of southern Africa’s freshwater, or water courses?

“Sounds like a job for @AfricaCheck,” Matt Hill tweeted and we got to work.

Where does the 60% figure come from?

When Africa Check phoned Mwale, he said he was misquoted and that he said instead that Zambia has 40% to 50% of the SADC’s freshwater. When asked on what he based it, Mwale sent Africa Check a paper in the International Journal of Fisheries and Aquatic Studies, but it did not contain data on Zambia’s freshwater resources.

An economist at the OECD, Carole Biau, told Africa Check that their statement related to the water courses flowing through Zambia, and not the country itself.

"[These] watercourses, in their entirety and spanning several other countries, carry about 60% of SADC water resources," she said. "The implication was really that regional collaboration on these resources is essential for Zambia, precisely because they are shared across so much of SADC."

Biau admitted that the wording of the statement "may have led to confusion." Africa Check is in the process of verifying the OECD's claim and will update this report once we've done so.

How do scientists calculate freshwater levels at national scale? 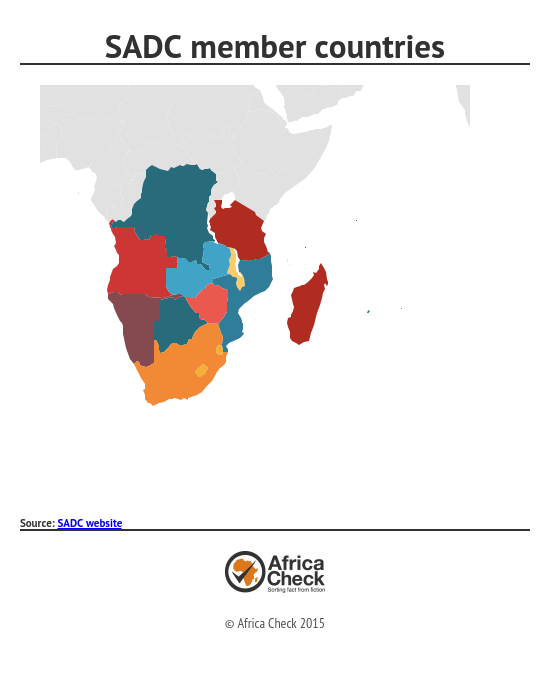 Calculating the quantity of freshwater a country holds relies on long-term annual averages, an associate professor in water resources engineering at the University of the Witwatersrand, John Ndiritu, told Africa Check. It is therefore not “a perfect indicator of the reality” of how much freshwater there is.

Freshwater includes rainfall, groundwater and “streamflow”, which is surface water in lakes, rivers and streams and that is measured by dedicated monitoring stations.

Determining the levels of groundwater relies on indirect measurement, professor of water engineering at Wits, Akpofure Taigbenu, told Africa Check. This is done by drilling into an aquifer and determining the water pressure.

“A small [pressure] value, with a large discharge [amount of water displaced], means that there is a large amount of water in the aquifer,” Taigbenu said.

Data on rainfall, groundwater and streamflow is expressed in billion cubic meters per year and summed to arrive at a freshwater total.

This data excludes the volume of water contained in dams, such as Kariba, Africa's largest dam at a volume of 188 billion m³ and which Zambia shares with Zimbabwe. “[Dams] are an essential part of managing water and dealing with droughts, but the water still comes from [rainfall],” Ndiritu said.

How much freshwater lies in Zambia?

Africa Check consulted a database called AQUASTAT that is kept by the UN’s Food and Agriculture Organization (FAO).

The organisation relies on countries to supply data and noted that “the best quality data are frequently not satisfactory”. Part of it is due to incomplete measurement. “South Africa has quite a lot of streamflow stations but other countries [in SADC] don’t have the same resources,” Ndiritu said.

Keeping these possible limitations in mind, the database showed that Zambia has 104.8 billion m³ of “renewable freshwater resources”. This is less than a twelfth of the DRC’s 1,283 billion m³ recorded and puts Zambia fifth in the SADC region, after Madagascar (337 billion m³), Mozambique (217.1 billion m³) and Angola (148.4 billion m³).

Calculated as a share of the SADC’s freshwater resources, Zambia holds 4.5% and the DRC more than half. (Click here to see the share of all the SADC member countries.)


Conclusion: Zambia has about 5% of the SADC’s freshwater

The claim that Zambia has 60%, or even 40% to 50%, of the SADC’s freshwater does not hold against the best available data. A database kept by the UN’s Food and Agriculture Organization puts its share at 4.5%.

The DRC is the outright leader in the SADC, containing more than half of the total freshwater volume in the community.