Is Zimbabwe really the “second poorest country on earth”? Zimbabwe news website Bulawayo 24 reported so in July. The claim was also picked up by other news outlets, including US business news site Business Insider, South Africa’s Eyewitness News and the online version of New Zimbabwe, a weekly newspaper for expats in the United Kingdom.
“A global business magazine has ranked Zimbabwe one of the two poorest countries in the world in a damning verdict of President Robert Mugabe’s 35-year-rule,” wrote New Zimbabwe.
Is the ranking correct? 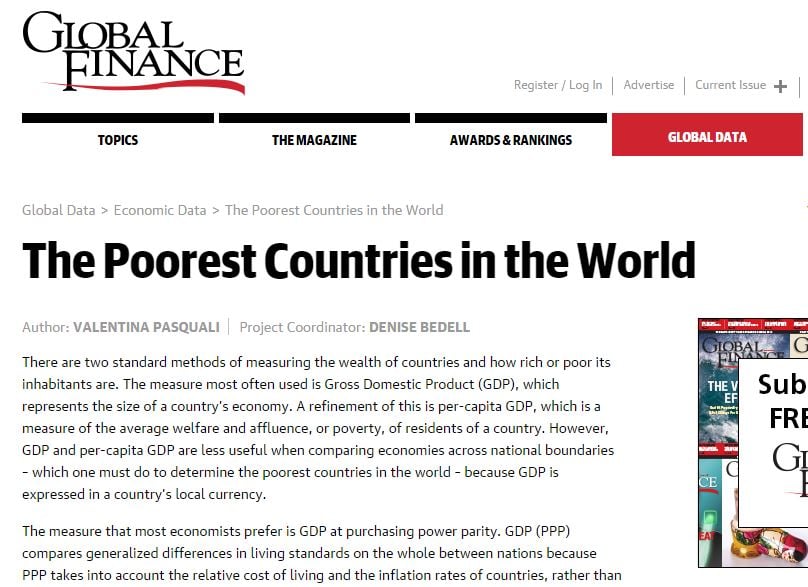 The news outlets cited as their source an article by New York-based magazine Global Finance in which 184 economies were ranked from poorest to richest.

Global Finance stated the list was compiled from 2013 International Monetary Fund (IMF) data. The way it was determined was by converting every country’s gross domestic product (GDP) – an estimate of the total value of goods and services produced in a country in a specific time period – to what is called the international dollar.

The conversion rate is calculated by working out how much of a country’s local currency you would need to buy what $1 would buy in the United States (this is referred to as purchasing power parity).

Each country’s GDP in international dollar was then divided by its population to provide a per capita figure. In this way you can see what each person’s income would have been if the GDP was divided equally among citizens.

According to Global Finance’s list, the Democratic Republic of Congo’s GDP in international dollar per capita was the lowest of the 184 countries in 2013 at $394, while Zimbabwe’s was next lowest at $590, followed by Burundi’s at $649.


Zimbabwe in 26th place of 187 countries


Figures in the IMF’s April 2013 World Economic Outlook Database correspond to those used by Global Finance, but the figures have since been backwardly adjusted and differ markedly.

Updated 2013 IMF estimates: Central African Republic’s GDP in international dollar per capita is the lowest of 187 countries at $604. Zimbabwe’s is 26th lowest at $1,976 per person.

2015 IMF estimates: Once again Central African Republic’s GDP in international dollar per capita is lowest at $634, while Zimbabwe is 26th out of 187 countries at $2,099 per person.


Why is the data different? 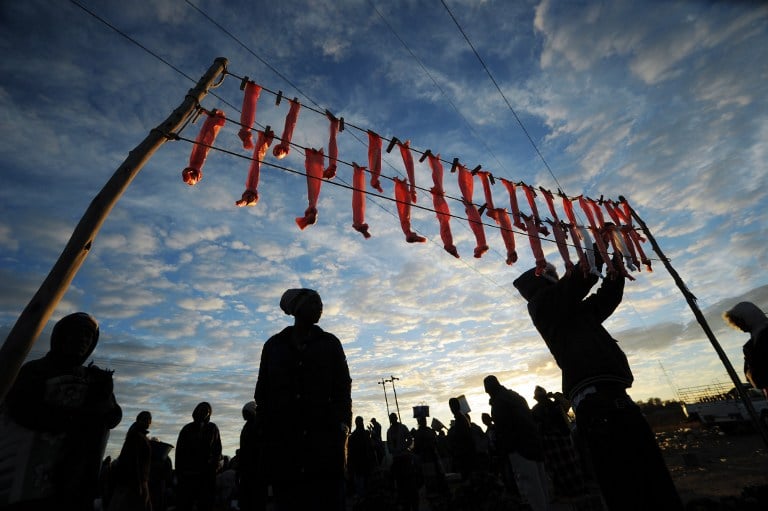 A vendor hangs up plastic bags at the Jambanja market in Seke, 58 km south of Harare, in August 2013. Photo: AFP/ALEXANDER JOE" />

In July 2014, the IMF updated their conversion rate to international dollar for all the countries they monitor. In the 2013 reports they were still using the International Comparison Program’s 2005 benchmarks, adjusted for inflation. The new 2011 benchmark suggested a “significantly higher” conversion rate for developing countries such as Zimbabwe.

“As per usual practice, we re-estimated the [conversion] rates for the preceding years based on the new [conversion] benchmarks. For this reason, there can be differences in the historical GDP data [in international dollar] between World Economic Outlook updates for a given country,” the IMF said in a statement to Africa Check.

The IMF sourced its input data from the Zimbabwe Revenue Authority, the Reserve Bank of Zimbabwe, the Zimbabwe National Statistics Agency and several business and nongovernmental organisations.

While this may seem exhaustive, Morten Jerven, economist and associate professor with Simon Fraser University in Canada, told Africa Check “it is not certain that the data covers all economic activities”. In a 2015 paper, he and his co-authors listed activities such as small scale mining, subsistence farming and parts of the formal sector that they considered underestimated.

“When the size of the economy is incorrectly measured, its ranking among other countries is wrong,” Jerven and his co-authors concluded.

But in the end “it does not make any sense at all to list and rank” the world’s economies, Jerven told Africa Check, because some countries measure economic activity that others don’t, such as informal economic activities.

“A country can be tenth, sixth or second poorest, all depending on the source,” he said.


Conclusion: Zimbabwe is not the world’s second poorest country


The data that a US business magazine used to rank countries from poorest to richest has since been updated.

The latest IMF data puts Zimbabwe’s GDP in international dollar per capita at $2,099, making it 26th lowest out of 187 countries. However, given the differences in how countries capture economic data and gaps that may exist, an expert says any such ranking would be flawed.

Are 5.7 million people employed in Zimbabwe’s informal economy? No