As part of President Jacob Zuma’s Siyahlola monitoring programme, the presidential motorcade rolled into Kwaggafontein in Mpumalanga last month, bringing the president and several ministers to inspect the local hospital and government-provided houses.

Speaking to the community afterwards in a large white marquee, Zuma reportedly said he was glad that statistics showed that the Mpumalanga province “eliminated 98% of bucket toilets in the last year”.

Ten years ago, former President Thabo Mbeki said that government would eradicate bucket toilets in established settlements by the end of 2007.

However, the census of municipalities that Zuma referred to in his speech showed that municipalities around the country still serviced more than 80,000 bucket toilets at the end of June 2015. This census was released by Statistics South Africa (Stats SA) just a couple of days before his visit. (Note: The non-financial census counts municipal-serviced bucket toilets in both formal and informal settlements but excludes people who buy and empty their own buckets.)

The figure for Mpumalanga was 1,800 in June 2014, which dropped to 30 by June 2015 - indeed a 98% reduction. All of these bucket toilets were located in the Victor Khanye local municipality in the Mpumalanga Highveld.

However, the figure of 30 from the census contradicts the one recorded by Victor Khanye itself in its 2014/15 annual report. The municipality stated that it serviced 351 bucket toilets then, down from 1,800 the year before. 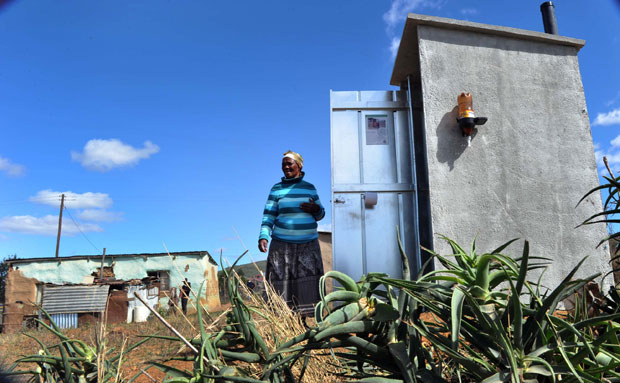 Spokesman for the municipality, Sentebaleng Masemola, said the 351 figure was an error and should have been 51, which still does not explain how it ended up as 30 on Stats SA’s books.

Manager for local government institutions at Stats SA, Malibongwe Mhemhe, said that they relied on municipalities to fill out a questionnaire in order to compile the non-financial census. On this, Victor Khanye had listed 30 bucket toilets.

“We shall also investigate from our respondent as to what is going on exactly with the buckets in this municipality,” he told Africa Check.

A non-profit human rights organisation, the Socio-Economic Rights Institute of South Africa (SERI), pointed to errors in official statistics in their 2011 guide to sanitation, saying that the stats “do not provide an accurate or adequate picture of the state of basic services delivery in South Africa”, affecting “the ability of all spheres of government to plan effectively”.


What’s the current state of play?

Nontsizi Dukashe next to her newly built toilet in the Eastern Cape in October 2014. Photo: GCIS" />

One of our friends at Daily Sun went to visit the Mandela informal settlement where the bucket toilets of Victor Khanye local municipality are located. (Note: In the municipality’s 2014/15 annual report they stated that 267 households had no sanitation facilities at all.)

“Many years into a democracy but we are still homeless and use a bucket system. We have no electricity and water,” Bafana Qiti (52) told reporter Bongani Mthimunye. “The municipality comes once a week to collect the buckets that get filled in two days and at times they can take up to a week or two before coming."

The bucket eradication programme places more emphasis on formal settlements as the “issue around informal settlements is that this is a moving target”, department of water and sanitation spokesman Sputnik Ratau told Africa Check. He said the department will not be able to meet the December 2016 deadline set last year to eradicate bucket toilets in formal settlements but that they have not yet set a new one.

Why do we still have a bucket toilet system 10 years after the deadline Mbeki had given for it to be eradicated?

“This is a complicated question that touches on national, provincial and local government planning, budgeting, policy, accountability and political will,” Naadira Munshi, a SERI research fellow, told Africa Check.

“The challenges present in urban and rural area also differ. Factors such as continued urbanisation, lack of adequate housing, the lack of land made available for housing and poor government planning affect access to sanitation,” she said.

“However, this can be overcome through planning, and a willingness to spend the money to ensure that people have access to services they are entitled to and by respecting people’s right to live in dignity.”

President Jacob Zuma based his claim that Mpumalanga “eliminated 98% of bucket toilets” between 2014 and 2015 on a census of municipalities. It showed that the province had 1,800 bucket toilets on 30 June 2014 and that it had dropped to 30 by the end of June 2015.

But our small-scale investigation has shown that errors creep in with official statistics, something that has been pointed out by other organisations before.

The municipality where these toilets are located had misreported their bucket toilet count to Statistics South Africa. The 2014/15 annual report of the Victor Khanye local municipality showed that it serviced 351 bucket toilets at the end of June 2015. However, the municipality says it should have been 51. Depending on which number is correct, it is a 98%, 97% or 80.5% reduction.

Oh, and remember, we’re only talking about municipal-serviced buckets here. Zuma didn’t include figures for the number of people who don’t have access to sanitation services from the municipal authorities and buy and empty their own buckets. Stats SA’s 2016 Community Survey estimates that 8,500 households in Mpumalanga make do with their own.

How many Nigerians abroad? And how much cash do they send home?

An online publication claims there are more than 15 million Nigerians in the diaspora who send home about US$25 billion every year. We fact-...