In the recent flurry of reporting around Zimbabwe, the country’s levels of unemployment have been frequently referenced. Depending on the source, it is “as high as 80%”, “pegged at 90%” or “runs at more than 90%”. 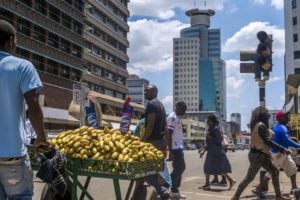 In 2014, Africa Check found that a similar swing of estimates wasn't backed by reliable data. At the time, the country’s most recent labour survey was from 2011, which pegged unemployment at 10.7%.

This figure was based on the “broad” definition of unemployment that included people who had given up looking for work, the survey by the Zimbabwe National Statistics Agency Zimstat said.

A narrower “strict definition” of unemployment, which only counted people who were out of work but actively looking for a job, put unemployment at 5.4%.

Crucially, the 2011 survey classified people who “worked for their own consumption”, such as subsistence farmers, as employed. In 2013, the international body of labour statisticians resolved that work “for own final use” should not be counted as employment.

Zimbabwe’s most recent official unemployment rate is 11.3%, Tidings Matangira, a manager at Zimstat told Africa Check. This number, based on an “expanded” definition of unemployment, is derived from a 2014 Labour Force and Child Labour Survey.

“However, this [unemployment] indicator should not be considered in isolation of the nature of jobs currently available in the country,” Matangira said.

At the time of the 2014 survey, Zimstat still considered persons doing “own use production work for own consumption” as employed, he added. Further, there have been the mushrooming of a lot of informal sector jobs “where people are self-employed as own account workers”.


Zimstat planned a labour survey using the International Labour Organisation’s new classification for 2017, but a lack of money has delayed it, Matangira said.

“We are hoping that next year we may get funding and do one. Our main challenge is funding otherwise everything else is ready.”

In the absence of a survey conducted under the latest accepted international practices, unemployment in Zimbabwe is difficult to quantify. But what data is available, shows that the current economic challenge is immense.– Lee Mwiti (30/11/2016)